Rain is normally slightly acidic due to the presence of some carbon dioxide in the atmosphere. That normal acidity is increased significantly with the addition of sulfur and nitrogen oxides from burning fossil fuels. The amounts of these compounds entering the atmosphere as emissions from the burning of fossil fuels far exceed the amount released by natural sources into the atmosphere. Winds carry the damaging substances to regions far from their source, where the acid rain damages the ecosystem and corrodes buildings.

Sulfur and nitrogen oxides released by the burning of fossil fuels react with water in the atmosphere to form strong acids. The acidity of solutions is measured in the 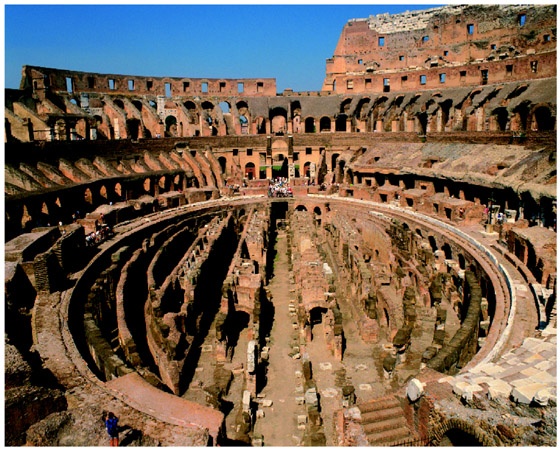 Acid rain takes a toll on many historic buildings and statues. The Colosseum in Rome, Italy, for example, is being damaged by acid rain. Passport Stock/Royalty Free. 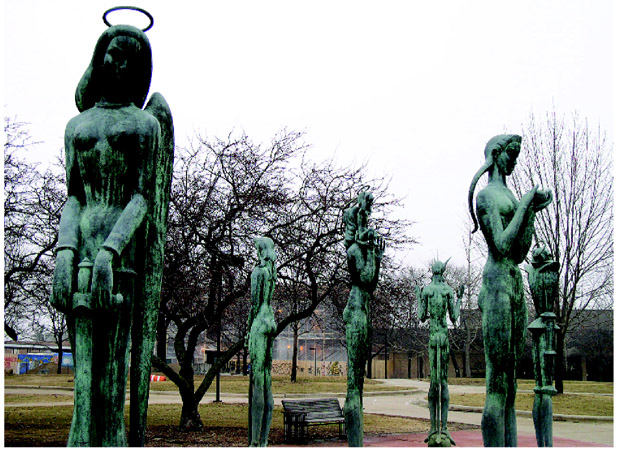 The “Saints and Sinners” sculpture on the Oakland University campus in Michigan shows signs of streaking due to acid rain. Made of bronze, the artwork is being corroded. © 2003 Kelly A. Quin.

pH scale. The pH scale goes from 0 to 14; a pH of 7 is neutral. Any solution with a pH above 7 is described as basic, while a solution with a pH below 7 is acidic. The lower the pH number, the more acidic the solution. With the normal solubility of carbon dioxide in atmospheric water, a mildly acidic, unpolluted rainfall has a pH of 5.6. In the regions that are seriously impacted by acid rain from the sulfur and nitrogen oxides in the atmosphere, the precipitation may have a pH of 4.1 to 5.1.

In the early 1970s, a serious depletion of aquatic life was observed in water bodies in Scandinavia, Scotland, northern England, the northeastern United States, and Quebec, Canada. The cause of the problem was found to be high levels of acidity in these ecosystems. Scientists soon traced the source of this increased acidity to acid rain. The damage was related to air pollution from industrial development long distances down wind from the freshwater ecosystems affected. For example, industries located in Central Europe were found to be the cause of acid rain damage in Scandinavia.

Studies of lakes near major industrial areas showed that they were not as seriously impacted as those far away in the direction of the prevailing weather systems. By the 1980s, the effects of acid rain were also being observed in the forests of Germany. The impact of acid rain continued to be seen in the northern regions where aquatic ecosystems were already in trouble. By this time, salmon were extinct in some regions. Salmon are very sensitive to changes in pH and will die if the pH falls to 5.5 or below.

The way in which acid rain damages forests is complex and multi-faceted. It starts with soils that are too acidic. Important nutrients in the soil disappear as soil acidity increases. This increase in soil acidity is followed by the release of a soluble form of aluminum, which is very harmful to vegetation, into the soil. Especially at higher elevations, forests also can be damaged when acidic precipitation falls directly on tree needles or leaves.

The ecological damage that results from acid rain was recognized as an international problem that required international cooperation to develop solutions. Since 1986, the International Cooperative Programme on Assessment and Monitoring of Air Pollution Effects on Forests has studied the impact of the release of sulfur and nitrogen oxides into the atmosphere on forests. Thirty-nine European countries have participated in these studies in close cooperation with the European Commission.

The European program has been extended to include the effects of climate change and carbon sequestering.

There has been some increase in nitrogen oxide, but also a great increase in the amount of carbon dioxide that is entering the atmosphere from the use of gasoline in vehicles for transportation and from industrial development. What started out as a program to address the acid rain problem has expanded to include consideration of the adverse environmental effects of all polluting gases.

ACID: Substance that when dissolved in water is capable of reacting with a base to form salts and release hydrogen ions.

BASE: One of the four chemicals (nitrogenous bases) that are a part of the deoxyribonucleic (DNA) molcule. The sequence of the bases determines the genetic code (the information contained within DNA). The first letters of each base provide the alphabet for the DNA code (A, C, G, and T [short for adenine, cytosine, guanine, and thymine]). Adenine and guanine are also classified as purine bases and are found in both DNA and RNA. Cytosine and thymine are classified as pyrimidine bases and while cytosine also occurs both in DNA and RNA (Ribonucleic acid), in RNA molecules another base (uracil) substitutes for the thymine found in DNA molecules. The bases bind together in very restricted and specific ways to form base pairs between DNA strands. In DNA, adenine always bonds with thymine (A-T bond) on the opposite strand and cytosine always bonds with guanine to form a (C-G) base pair between stands of the DNA helix. In electronics a base is also the middle slice of a transistor.

CARBON SEQUESTERING: Storage or fixation of carbon in such a way that it is isolated from the atmosphere and cannot contribute to climate change. Sequestration may occur naturally (e.g., forest growth) or artificially (e.g., injection of CO2 into underground reservoirs).

FOSSIL FUELS: Fuels formed by biological processes and transformed into solid or fluid minerals over geological time. Fossil fuels include coal, petroleum, and natural gas. Fossil fuels are non-renewable on the timescale of human civilization, because their natural replenishment would take many millions of years.

GREENHOUSE GASES: Gases that cause Earth to retain more thermal energy by absorbing infrared light emitted by Earth's surface. The most important greenhouse gases are water vapor, carbon dioxide, methane, nitrous oxide, and various artificial chemicals such as chlorofluorocarbons. All but the latter are naturally occurring, but human activity over the last several centuries has significantly increased the amounts of carbon dioxide, methane, and nitrous oxide in Earth's atmosphere, causing global warming and global climate change.

PH: Measures the acidity of a solution. It is the negative log of the concentration of the hydrogen ions in a substance.

IN CONTEXT: ACID RAIN AND THE PH SCALE

When describing acid rain, scientists actually refer to a more precise term, acid deposition. Scientists distinguish between two types of acid deposition: wet and dry. Dry deposition includes acidic gases and solid particles containing sulfuric and nitric acid that settle out of the air and land on the ground or other surfaces. Dry deposition usually occurs very close to the point where the air pollution occurs. Wet deposition occurs when precipitation—such as rain, sleet, fog, or snow—becomes acidic and falls to the ground. Wet deposition can occur hundreds of miles from the place where the air pollution originates.

Some carbon dioxide is normal and necessary in the atmosphere, but excess carbon dioxide is a greenhouse gas that is contributing to global warming. Regulations have been passed to reduce the emissions of sulfur and nitrogen oxides and also to capture, or sequester, some of the extra carbon dioxide that is considered to be a prime offender in the issues of climate change beyond acid rain.