Arguably the first great land battle of the Civil War. The Battle of Shiloh (also known as the Battle of Pittsburg Landing) took place along the banks of the Tennessee River at Pittsburg Landing, some 23 miles north of the strategic town of Corinth, Mississippi. The battle derived its name from a small Methodist church named Shiloh (Hebrew for “place of peace”).

By April 1862, Union forces had driven the Confederates from Kentucky and Tennessee; had opened the Tennessee River to Florence, Alabama; and were preparing a conquest of the Mississippi. Stung by defeats at Fort Henry (February 6) and Fort Donelson (February 13–16) and the loss of Nashville (February 25), commander of Confederate Department No. 2 General Albert Sidney Johnston was determined to engage and defeat the Federals. He called up reinforcements and ordered a concentration at Corinth. 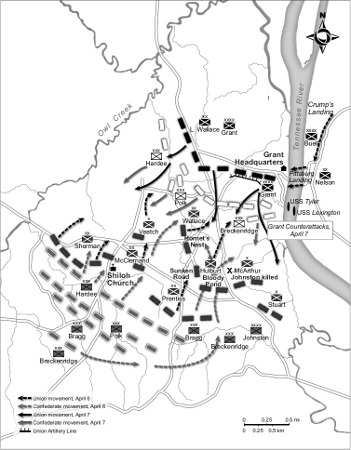 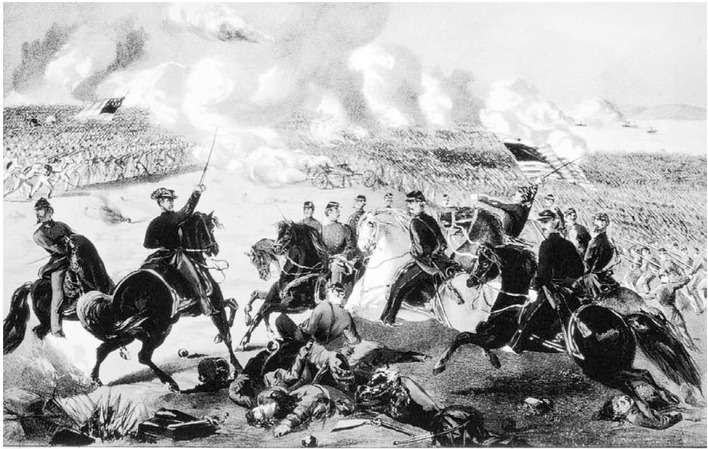 Fought on April 6–7, 1862 on the west bank of the Tennessee River and 23 miles north of strategic Corinth, Mississippi, the Battle of Shiloh ended in a Union victory but claimed 23,732 total casualties and was, to that date, the bloodiest battle in American history. (Library of Congress)

The strategy promulgated by Major General Henry Halleck, commander of the Union Department of the Mississippi, was to send forces down the Mississippi but also sever Confederate railroad lines across the region and take the town of Corinth, a key railhead. Halleck ordered Major General Ulysses S. Grant and his Army of West Tennessee (soon to be renamed the Army of the Tennessee) to link up with Major General Don Carlos Buell’s Army of the Ohio, which was marching from Nashville. The two would then operate together in a joint offensive against Corinth. Seizing the town would cut two important Confederate railroads, the west-east Memphis & Charleston Railroad, connecting the Mississippi, Memphis, and Richmond, and also the north-south Mobile & Ohio Railroad.

Grant’s six divisions of nearly 39,000 men arrived at Pittsburg Landing. Grant pushed his men two miles inland on the west bank of the river, where they set up camp and waited for Buell’s forces, delayed in their march by heavy rains, to arrive. Grant’s troops were loosely arrayed near Shiloh Church. Grant, however, had neglected to send any reconnaissance parties to ascertain Confederate strength. He was more preoccupied with his own offensive plans. As a result, defensive arrangements had been largely ignored. By early April, Grant’s men were scattered throughout the area, with no attempt having been made to form any sort of battle line or even throw up rudimentary earthworks. 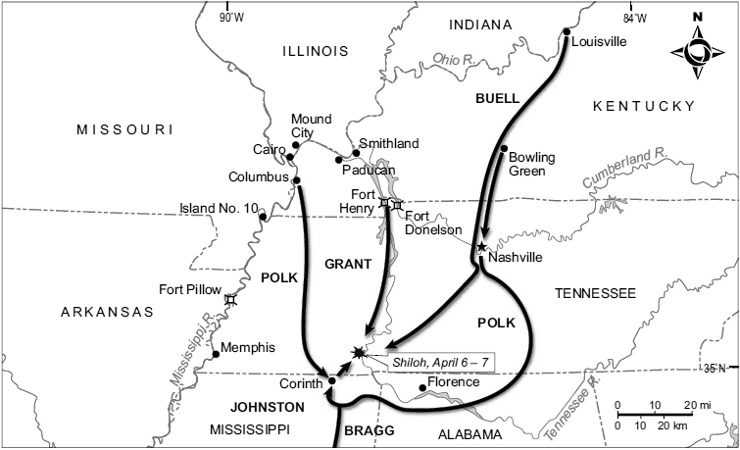 The Confederates were not quiescent, however. Johnston, who was well aware of Grant’s arrival at Pittsburg Landing and probable Union intentions, was determined to strike Grant and destroy his army before Buell could arrive with his 36,000-man army. Johnston organized his army into four corps under Major Generals Leonidas Polk, Braxton Bragg, and William J. Hardee and Brigadier General John C. Breckinridge. On April 3, Johnston set out with 44,000 men from Corinth for Pittsburg Landing; however, rains turned the roads into quagmires, making progress slow and difficult. On April 5, Johnston’s men were a scant four miles southwest of Shiloh, although their arrival went unnoticed by Union forces.

The Confederates were hindered not only by the stubborn Union defense but also by ill-trained troops who stopped to loot the abandoned Union camps. A faulty battle plan also contributed, as the four corps became hopelessly tangled. The offensive ground to a halt as units became disorganized. Afforded time to redeploy, Grant, who was not on the field when the attack came, rushed to the landing from nearby Savannah, Tennessee, and began to organize a defensive position around the landing. He slowly re-formed a solid defensive front centered on a sunken road held by Prentiss’s men. Grant ordered it held at all costs. The Confederates described the bitter fighting there as the Hornet’s Nest.

The Confederates, meanwhile, had lost their commander. At about 2:00 p.m. while directing an attack on the Union lines, Johnston was struck in the leg by a bullet that severed an artery, and he bled to death on the field. General P. G. T. Beauregard then assumed command of the Confederate forces. Fighting raged across the field. The Confederates massed 62 guns and finally blasted Prentiss into submission. He and some 2,000 defenders of the Hornet’s Nest surrendered at around 5:30. By the evening of April 6, although Union forces had been driven from their camp, they had developed a strong defensive position around Pittsburg Landing, protected on their flanks by ravines and by the heavy guns of two gunboats in the river to their rear. That evening in a controversial decision, Beauregard suspended the Confederate attack, expecting to complete the destruction of the Union army in the morning.

During the night, however, lead elements of Buell’s army and Major General Lew Wallace’s division arrived and were immediately hurried into the line. On April 7 to Beauregard’s surprise, Grant struck first. At about 7:30 a.m., Union forces began steadily pushing the Confederates back. The fighting that day was as bloody as the combat of the previous day. Late that afternoon, Beauregard pulled his battered and exhausted army back to Corinth. The Union army did not pursue.

The Battle of Shiloh was over. The first great meat-grinder battle of the war, it had cost the Union 13,038 casualties (1,745 killed, 8,408 wounded, and 2,885 captured). The Confederates lost 10,694 (1,723 killed, 8,012 wounded, and 959 missing or captured). The grisly total of 23,732 causalities from this single battle was more than the United States had suffered in all of its previous wars combined. The carnage shocked Americans, North and South.

The Union victory at Shiloh was of tremendous consequence in the war. Although criticized for his lack of preparation, Grant had survived and proven himself to be an aggressive commander. Although temporarily demoted by Halleck afterward, Grant withstood calls for his head and was sustained by President Abraham Lincoln, who famously stated, “I can’t spare this man. He fights.” The battle ultimately doomed the Confederate cause in the West. After a tortoise-like advance and siege directed by Halleck, the Confederates abandoned Corinth in June.

Smith, Timothy B. The Untold Story of Shiloh: The Battle and the Battlefield. Knoxville: University of Tennessee Press, 2006.