The Second Amendment to the U.S. Constitution reads: “A well-regulated Militia, being necessary to the security of a free State, the right of the people to keep and bear Arms shall not be infringed.” Derived in part from a provision in the 1689 English Bill of Rights, which guaranteed the rights of Protestants to possess arms, an explicit protection was suggested by a number of states following the ratification of the U.S. Constitution, and was included in the twelve amendments submitted by James Madison (1751–1836) to the First Congress and to the states for ratification.

Debates over the meaning of the Second Amendment began in earnest in the 1930s when the first federal gun-control laws were passed; those debates intensified in the late 1960s, continuing into the mid-1990s as federal gun-control laws expanded. At the same time, what had been the prevailing consensus—that gun-control laws raised no serious constitutional questions—fragmented, with many respected constitutional law experts conceding, sometimes reluctantly, that the Second Amendment did offer some protection for private gun ownership.

Contemporaneously, cracks appeared in the judicial consensus, formerly dismissive of the notion that the Second Amendment protected any individual right. In 2007 a petition for certiorari was filed asking the U.S. Supreme Court to rule on the constitutionality of the District of Columbia's total ban on handgun possession, which was struck down by the D.C. Court of Appeals. The Supreme Court agreed, in November of 2007, to 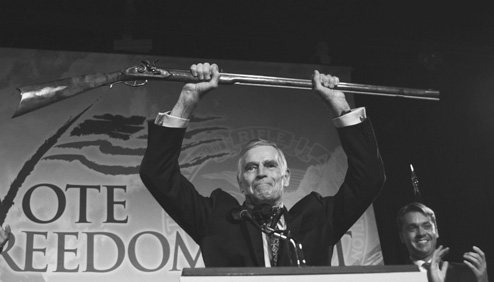 National Rifle Association president Charlton Heston, Manchester, New Hampshire, October 21,2002. Throughout much of the twentieth century and into the twenty-first, scholars have debated whether the Second Amendment gives individuals the right of gun ownership or only allows states to maintain an armed militia. AP IMAGES

review that case, setting the stage for the Court's first Second Amendment case since 1939.

THE RIGHT TO KEEP AND BEAR ARMS IN THE COURTS

Only two Supreme Court decisions have squarely addressed the Second Amendment. In the first, United States v. Cruikshank, 92 U.S. 542 (1876), the Court declined to apply the amendment to the states. In this case, the United States had brought charges against members of the Ku Klux Klan for, among other things, violating the First and Second Amendment rights of black citizens in Louisiana when a mob of whites attacked and killed sixty blacks in April 1873 in what came to be known as the Colfax Massacre. Because of Cruikshank, and a later case, Presser v. Illinois, 116 U.S. 252 (1886), the Second Amendment remains one of the few provisions of the Bill of Rights that has not been incorporated through the due process clause of the Fourteenth Amendment and applied to the states.

Over a half century later, the Court decided United States v. Miller, 307 U.S. 174 (1939), which was an appeal from a district court's decision to quash an indictment of two men, Jack Miller and Frank Layton, who were accused of possessing a sawed-off shotgun in violation of the National Firearms Act of 1934. The act banned certain firearms, such as machine guns, in response to public outrage over gangland violence. Miller is a curious case, in part because there was no appearance for the appellees; the only brief was filed by the U.S. government, and only the government appeared at oral argument. In its brief, the government argued that the Second Amendment protected only the right of states to form and arm militias, and did not guarantee an individual right to keep arms for private defense.

The Court did not rest its decision to reverse the district court on that argument, however. Instead it relied upon what was the government's fallback position: that whatever the Second Amendment guaranteed, it did not protect Jack Miller's sawed-off shotgun, since it was not suited to military purposes. Or at least, as the Court put it, it could not take judicial notice of that fact:

In the absence of any evidence tending to show that possession or use of a “shotgun having a barrel of less than eighteen inches in length” at this time has some reasonable relationship to the preservation or efficiency of a well-regulated militia, we cannot say that the Second Amendment guarantees the right to keep and bear such an instrument. Certainly it is not within judicial notice that this weapon is any part of the ordinary military equipment or that its use could contribute to the common defense.

Miller was, until the Court agreed to hear arguments on the constitutionality of the District of Columbia's gun control laws, the Court's last—ambiguous—word on the meaning of the Second Amendment.

Following Miller, lower courts were quick to read the opinion broadly as standing for the proposition that the Second Amendment protected no individual right and guaranteed only the right of states to arm their militias. This was a curious reading of the case, given the Court's decision to ignore that very ground in reversing the district court, but it was repeated so often in judicial opinions that it attained the status of received wisdom.

In the wake of scholarly commentary that questioned the no-individual-right interpretation of the Second Amendment, the Fifth Circuit Court of Appeals in United States v. Emerson, 270 F.3d 203 (5th Cir. 2001) held that the Second Amendment did guarantee an individual right. While that holding did not result in a dismissal of the indictment against the defendant, a doctor convicted of possessing a firearm while the subject of a court order of protection, it did represent the first victory for the individual-rights interpretation since the district court quashed Miller and Layton's indictments.

Emerson created a circuit split between the Fifth Circuit and most other federal circuits. The split was sharpened when the Ninth Circuit, in a lengthy opinion by Judge Stephen Reinhardt, again rejected the individual-rights view in Silveira v. Lockyer, 312 F.3d 1052 (9th Cir. 2002). The D.C. Court of Appeals sided with the Fifth Circuit in Parker v. District of Columbia, 478 F.3d 370 (D.C. Cir. 2007), sustaining a Second Amendment challenge to the District of Columbia's near-absolute ban on handguns and long guns brought by persons seeking to use them for self-defense. The U.S. Supreme Court heard oral arguments in the case (now known as District of Columbia v. Heller) in March 2008 and a decision was expected by that summer.

THE DEBATE OVER THE MEANING OF THE SECOND AMENDMENT

The debate over the meaning of the Second Amendment boils down to whether the amendment guarantees an individual right—like the First Amendment's right to free speech—that persons could assert against federal (or, if incorporated, against state or local) gun-control laws infringing the right “to keep and bear arms.” Prior to some revisionist law-review treatments that appeared in the 1980s, the scholarly consensus (like that of the judiciary) was that it did not. The Second Amendment, this argument ran, guaranteed only a “collective” right of states to form and arm militias, such as state National Guard units; individuals could not invoke the amendment to challenge federal, state, or local gun-control laws. As a consequence, proponents of this interpretation argued, there was no legal—or at least no constitutional—dimension to the gun-control debate.

Some legal scholars, including Don Kates and San-ford Levinson, began to question this conclusion. They argued that text and history pointed toward the conclusion that the Second Amendment did in fact guarantee an individual right and that existing or proposed gun-control laws had to take account of this fact. Even proponents of the individual-rights theory, however, disagreed over the scope of the right; most conceded that some regulation of the right was constitutional, even while arguing over how much regulation was permitted. As gun control moved back onto the national agenda during the Bill Clinton administration, a number of academics who had subscribed to the anti-individual-rights position without question—most notably Harvard's Laurence Tribe—found themselves persuaded that they had been too quick to dismiss the individual-rights position.

However, as the debate between the individual- and anti-individual-rights camps became stalemated, historians like Saul Cornell entered the fray, arguing that both sides’ positions are reductionist and anachronistic. Cornell argues that individual-rights positions have elided an important connection between arms-bearing and community membership that was central to the framers’ worldview. He challenges both sides to “imbue the Second Amendment with a positive vision that enriches American constitutional life” (2006, p. 215). Similarly, law professor David Williams argues that since the connection between arms-bearing and community service envisioned by the framers and embodied in the Second Amendment has been severed, the amendment is nearly meaningless.

It is perhaps a sign of how deeply entrenched the individual-rights view is in American culture that judicial indifference—and, occasionally, hostility—to the Second Amendment has been largely beside the point. Neither Congress, nor many states, has enacted strong gun-control regimes, even in the wake of highly publicized mass shootings. Congress has, in fact, immunized gun manufacturers from certain civil lawsuits that cities attempted to bring to recoup costs of gun violence that they attributed to gun manufacturers’ marketing practices. More than many other provisions of the Bill of Rights, the Second Amendment and the right to keep and bear arms have been vigorously protected by popularly elected branches of government and have not depended upon the courts for robust protection.

Tushnet, Mark. 2007. Out of Range: Why the Constitution Can’t End the Battle Over Guns. New York: Oxford University Press.