With each breath, the lungs inhale air filled with nitrogen and oxygen, the most abundant natural gases in the atmosphere. Also inhaled, however, are small quantities of gases and particles that are pollutants. Understanding the effects of these pollutants and how to control their emissions has been a continuing challenge for many centuries.

Humans have made a large impact on the state of the atmosphere ever since they first began using fire for light, cooking, and heat. When early populations traded their nomadic lifestyle for one based on agriculture, concentrations of air pollutants began to accumulate around permanent communities. With population growth came an increase in the use of fire, along with an increasing demand for wood.

In the twelfth and thirteenth centuries as wood became more difficult to find, growing cities began looking for alternate sources of energy. The solution was coal—plentiful, cheap, long-lasting, and hailed as the perfect new source of energy. The only "inconvenience" was the heavy black smoke that resulted from its burning. It was not long, however, before this inconvenience became a serious health concern.

As industrialization increased over the next few hundred years, the burning of coal and wood produced some of the unhealthiest air ever recorded. In some European cities, hundreds of deaths were blamed on episodes of excessive smoke and soot. London's air was especially filthy: The mixture of smoke and fog (later termed "smog") was at times so thick that it affected visibility. As little was done to control the burning of coal, many cities in Europe, Asia, and the Americas suffered from poor air quality.

Although the burning of coal remains one of the largest global sources of air pollution, the rise of automobiles in the mid-twentieth century was another major source. This was especially true on the west coast of the United States, where the ever-rising automobile population, coupled with a large petroleum industry, generated a different type of pollutant; cities became known for "brown smog," a layer of pollution that forms in sunny skies and causes irritation to the lungs and eyes.

Although Earth has its own sources of naturally produced air pollutants, humans have had a far larger effect on Earth's atmosphere. One of the mostPage 72  |  Top of Article striking examples of this pollution is acidic deposition, or "acid rain." Acid rain occurs when emissions of sulfur dioxide and nitrogen oxides, which typically come from coal-burning power plants and automobile emissions, react with water and oxygen to form acidic compounds such as nitric acid and sulfur-containing acids, according to the following reactions:

Once airborne, these pollutants can travel long distances before returning to Earth's surface as rain or snow, or in a dry form.

Even "normal" rain (rain that has not formed in a polluted atmosphere) is acidic because of the presence of carbon dioxide in the atmosphere:

Over the millennia, normal rain has created limestone caves because calcium carbonate is slightly soluble in solutions of H2CO3:

The additional burden of human air pollution, however, has made acid rain an important environmental concern. Acid rain may acidify lakes and streams, making the water unsuitable for some fish and other wildlife. Further damage has been reported in soil and tree vegetation, which are sensitive to the acid level of rainwater.

Acid rain also speeds the decay of buildings, statues, and other man-made structures. Natural treasures such as the Taj Mahal in India, the Acropolis in Greece, and cathedrals in Germany and Britain have suffered significant damage due to acid rain. Although large sums of money are being used to help repair these structures, some damage is beyond repair.

Many governments have enacted controls on the chemicals responsible for acid rain. Although there have been some improvements in acid levels in lakes and streams, there are still many scientists who believe that stricter controls are necessary to reduce the risk to Earth's land and water. 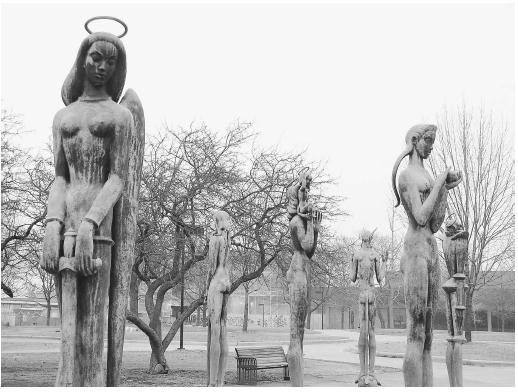 These statues, "Saints and Sinners" by sculptor Marshall Fredericks at Oakland University, Rochester, Michigan, were exposed to acid rain. The reaction of water with sulfur dioxide and nitrogen oxides forms acidic compounds, speeding the statues' decay.

Ozone (O3) is a gas consisting of three oxygen atoms. The ozone layer of the atmosphere acts as a shield protecting Earth's surface from the Sun's harmful ultraviolet (UV) radiation. When ozone absorbs UV radiation, it decomposes into an oxygen molecule (O2) and an oxygen atom (O) as:

Even a relatively small decrease in the ozone layer could produce significant risks to human, animal, and plant life. For example, scientists estimated that even a 1 percent decrease in global ozone levels would produce 10,000 more cases of skin cancer each year.

Fluorocarbons are a class of chemicals widely used in various technologies, including air conditioning, aerosol cans, and fire extinguishers. While the chemicals have proved extremely useful, it was not until the 1970s (when growing concentrations of chlorine were detected in the upper atmosphere) that scientists first realized that chlorofluorocarbons (CFCs), a type of fluorocarbon, could potentially destroy ozone.

The widespread growth of CFCs produced an unsuspecting increase in upper atmosphere chlorine. When a CFC molecule is released into the atmosphere,Page 74  |  Top of Article it can remain for many years without reacting with other chemicals. Once the CFC molecule reaches the upper atmosphere, however, it can be broken apart by UV radiation, thus releasing a chlorine atom. It is this release of chlorine that poses the serious risk to Earth's ozone layer, because it is involved in a series of ozone depleting reactions in which a chemical family or a particular species is depleted, leaving the catalyst unaffected. Ozone can be affected by such a cycle. In the presence of a chlorine atom (Cl), atomic oxygen and an ozone molecule are converted into molecular oxygen via the following two-step process:

A single chlorine atom can potentially destroy many thousands of ozone molecules. Notice that a chlorine atom is consumed in the first reaction and preserved in the second reaction. Chlorine atoms thus act as catalysts in the depletion of ozone.

It was not until the Antarctic ozone hole was discovered in 1985 that scientists first realized how fragile the ozone layer can be to specific chemicals. In 1987 thirty-one countries agreed to protect the ozone layer through a reduction and elimination of the chemicals that destroy ozone. This international agreement, known as the Montreal Protocol, has successfully reduced the use and production of CFCs, with the long-term goal of restoring the ozone layer to its original state.

The struggle to improve air quality has persisted for many years. Although many cities still have air pollution episodes that are classified as unhealthy, stricter emission controls mean that the air over most major cities is cleaner today than it was in the mid-twentieth century. Even so, issues such as acid rain and ozone depletion continue to pose serious environmental challenges that require cooperation between science and policy.