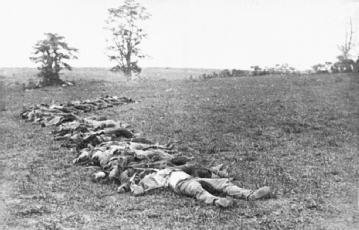 Aftermath of Antietam. Until long afterward, Alexander Gardner (and his associates) received little personal recognition for unprecedented stark battlefield photographs like this one of dead Confederates collected for burial. Initial credit went to his famous employer in New York, Mathew Brady—who took few photographs of the war himself. LIBRARY OF CONGRESS

ANTIETAM, BATTLE OF. The Battle of Antietam took place on 17 September 1862. With an estimated 23,100 total casualties, it was the bloodiest single-day battle of the American Civil War. As a result of the high number of casualties on each side, the battle was a tactical draw, although a strategic victory for the Union.

The battle was a result of the Confederate army's first attempt to wage war in the North. Early in September 1862 General Robert E. Lee's Army of Northern Virginia crossed the Potomac into Maryland. He concentrated at Frederick, then sent T. J. "Stonewall" Jackson's corps south to take Harpers Ferry and General James Long-street's corps westward across the South Mountain. On 14 September, Union general George Brinton McClellan's Army of the Potomac forced the mountain passes.

Lee began to concentrate toward the Potomac and took position at Sharpsburg, on Antietam Creek. While Longstreet was assembling, Lee heard that Jackson hadPage 200  |  Top of Article captured Harpers Ferry and made the bold decision to stand and fight behind the creek, with the Potomac at his back. Longstreet took the right of the line, and Jackson's troops, as they arrived, took the left. McClellan planned to strike Lee's left with three corps (commanded by Generals Joseph Hooker, Joseph Mansfield, and Edwin Sumner). He would follow this blow with an attack by General Ambrose E. Burnside's corps on the Confederate right and hold Fitz-John Porter's and W. B. Franklin's corps, with Alfred Pleasonton's cavalry, in reserve in the center. But Hooker, Mansfield, and Sumner attacked successively, not simultaneously, and each in turn was beaten. Burn-side's attack on the other flank came still later.

On the Confederate side, Longstreet's line had been weakened to reinforce Jackson, for Lee had no real reserve. As a result, although Burnside made some progress at first, when fully engaged he was struck in flank by A. P. Hill's division, the last of Jackson's troops returning from Harpers Ferry. Burnside was driven back to the bridge by which he had crossed the creek, and darkness ended the fighting.

On 18 September, Lee stood fast and McClellan did not renew his attack. The following day, Lee withdrew his army across the Potomac. The numbers engaged are uncertain; perhaps a fair estimate is 50,000 Union, 40,000 Confederate. But this represented Lee's entire strength, and McClellan had 20,000 troops in reserve, never used. Losses for the Union army numbered about 12,000 casualties, including 2,108 killed. The Army of Northern Virginia lost almost 25 percent of its forces, including at least 1,500 killed. News of the carnage spread throughout the country after newspapers published photographer Alexander Gardner's vivid and disturbing photographs of the battlefield. As a strategic Northern victory, Antietam provided the positive news President Abraham Lincoln thought a prerequisite for issuing the Emancipation Proclamation. The victory also gave the impression that the North was doing better in the war, which may have helped elections for the Republican Party in 1862.

Antietam was designated a national battlefield by an act of Congress on 30 August 1890. Today the park is run by the National Park Service and receives approximately 280,000 visitors each year.