BLACK PANTHERS. Organized in Oakland, California, in October 1966 by Huey P. Newton and Bobby Seale, the Black Panther Party for Self-Defense incorporated Marxist ideology into its platform to include demands for health care, housing, employment, and education reforms. A militant stance against police brutality, however, drew most of its media attention, particularly after the group staged an armed protest at the California General Assembly on 2 May 1967 against a proposed ban on concealed weapons. In contrast to separatist groups, the Black Panthers advocated a cross-racial coalition that emphasized both class and racial inequities. Although it failed to become a true mass movement—never growing beyond an estimated five thousand members in thirty-five cities—the Black Panther Party was the target of numerous federal and local police investigations designed to discredit its leadership and weaken its influence.

A short-lived alliance in 1968 with the Student Non-violent Coordinating Committee was one of many internal tensions that marked the Black Panthers. In February 1971, the Panthers' minister of information, Eldridge Cleaver, already in exile to avoid a prison term, was expelled over ideological differences within the group. Seale faced charges of conspiring to incite a riot at the 1968 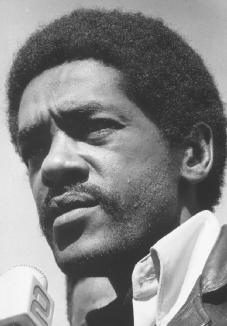 Bobby Seale. A founder of the Black Panthers, and a leader of the militant organization until he left in 1974. ARCHIVE PHOTOS, INC.

Democratic National Convention; after his acquittal as part of the Chicago Seven, he ran unsuccessfully for mayor of Oakland in 1973 and left the Black Panthers in 1974. Newton, facing criticism for corruption and an indictment for murder, left in November 1974.

Under the leadership of Elaine Brown, the Black Panthers revived many of their community programs. The group also turned to electoral politics; Brown vied unsuccessfully for a seat on the Oakland City Council in 1973 and 1975 and served as a delegate for candidate Jerry Brown at the 1976 Democratic National Convention. The Black Panthers dissolved in 1982.