KING, MARTIN LUTHER, ASSASSINATION. At 6:01 P.M. on Thursday, 4 April 1968 a fatal rifle shot hit Martin Luther King Jr. as he stood on a balcony outside his second-floor room at the Lorraine Motel in Memphis, Tennessee. The civil rights leader had arrived in Memphis the previous day to prepare for a march planned for the following Monday on behalf of the city's striking sanitation workers. Late in the afternoon of the fourth, SOUTHERN CHRISTIAN LEADERSHIP CONFERENCE (SCLC) Executive Director Andrew Young and attorney Chauncey Eskridge returned to the Lorraine to report on their successful effort to convince District Judge Bailey Brown to lift his antiprotest restraining order that was prompted by violence which disrupted a march a week earlier. Pleased that he would be able to proceed with the planned march, King was preparing to leave for a dinner at the home of Memphis minister Billy Kyles when he stepped out on the balcony of room 306. As King talked with SCLC colleagues standing in the parking area below, an assassin fired a single shot severely wounding the lower right side of King's face. As Ralph Abernathy cradled King's head, other SCLC aides rushed toward him. Some of those on the balcony pointed across the street toward the rear of a boarding house on South Main Street. An ambulance rushed King to St. Joseph's Hospital where doctors pronounced him dead at 7:05 P.M.

News of King's assassination prompted outbreaks of racial violence, resulting in forty-six deaths and extensive property damage in dozens of American cities, including Washington, D.C. President Lyndon Johnson attended a memorial for King on the fifth and called for a national day of mourning to be observed two days later. A march was held in Memphis on the eighth to honor King and to support the sanitation workers. The march attracted thousands of participants, including King's widow and other family members. King's funeral, attended by many of the nation's political and civil rights leaders, occurred the following day in Atlanta at Ebenezer Baptist Church, where King served as co-pastor along with his father, Martin Luther King Sr., and his brother, A. D. King. Morehouse College President Benjamin Mays delivered the eulogy. After another ceremony on the Morehouse campus, King's body was interred at Southview Cemetery; 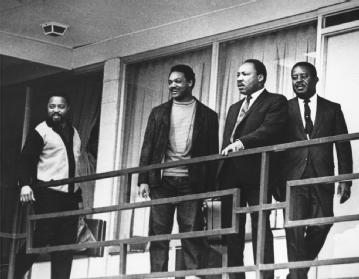 Martin Luther King Jr. The civil rights leader (second from right) arrives at the Lorraine Motel on 3 April 1968 with (left to right) Hosea Williams, Jesse Jackson, and Ralph Abernathy; the next day he would be assassinated there. AP/WIDE WORLD PHOTOS

it was later moved to a crypt at the site of the King Center, an institution founded by King's widow, Coretta Scott King, located next to Ebenezer Church.

Search for the Assassin

Within minutes of the assassination, a policeman who had rushed to the area discovered a bundle containing a 30.06 Remington rifle in the doorway of the Canipe Amusement Company, located on South Main next door to the boarding house. Based on its serial number, investigators from the Federal Bureau of Investigations determined that the weapon had been purchased at Aeromarine Supply Company in Birmingham, Alabama, by a person using the name Harvey Lowmeyer. FBI agents learned that the Ford Mustang found on 10 April abandoned in Atlanta was registered to Eric Starvo Galt and subsequent handwriting analysis indicated that Galt and Lowmeyer were the same person. These discoveries led FBI agents to an apartment in Atlanta, where they found a thumbprint matching that of James Earl Ray, a fugitive who had escaped from a Missouri prison in April 1967. FBI agents and police in Memphis produced further evidence that Ray had registered on 4 April at the South Main rooming house under the alias John Willard and had taken a second-floor room near a common bathroom with a view of the Lorraine Motel.

The identification of Ray as a suspect led to an international search. After examining passport application photographs, Canadian officials found that a passport had been issued on 24 April to a person using the name Ramon George Sneyd, who resembled Ray and whose handwriting matched samples of Ray's. They also determined that the person using the passport had left Canada for London. On 8 June British immigration officials on the alert for Ray detained him while he prepared to board a flight to Brussels (Ray later explained that his ultimate destination was the white-ruled nation of Rhodesia [later Zimbabwe]). On 18 July Ray arrived in the United States after being extradited to stand trial.

In a plea bargain, Tennessee prosecutors agreed in March 1969 to forgo seeking the death penalty if Ray pled guilty to murder charges. The circumstances leading to this decision later became a source of controversy, because Ray recanted his confession soon after being sentenced to a ninety-nine-year term in prison and claimed that his attorney, Percy Foreman, had provided inadequate representation due to his fear that lucrative arrangements to publish Ray's story would be compromised if the defendant testified in open court. Ray fired Foreman, but hePage 530  |  Top of Article was unsuccessful in his subsequent attempts to reverse his conviction and gain a new trial.

During the years following King's assassination, doubts about the adequacy of the case against Ray were fueled by revelations of extensive surveillance of King by the Federal Bureau of Investigation and other government agencies. In the aftermath of the Watergate scandal that ended Richard Nixon's presidency, congressional investigations of illegal FBI activities during the 1960s prompted calls for a reopening of the assassination investigation. Frame-Up (1971) by Harold Weisberg and Code Name "Zorro" (1977) by Mark Lane (Ray's lawyer during the late 1970s) and Dick Gregory raised questions about the evidence against Ray. In 1976 the House Select Committee on Assassinations launched a re-examination of the evidence concerning King's assassination as well as that of President John F. Kennedy. The committee's final report, released by Chairman Louis Stokes (Democrat, Ohio) in January 1979, suggested that Ray may have been motivated by a reward offered by two St. Louis businessmen and may have had coconspirators, possibly his brothers, John and Jerry Ray. Despite detailing the FBI's activities targeting King, the report nonetheless concluded that there was no convincing evidence of government complicity in the assassination. Rather than ending conspiracy speculation, the report and twelve volumes of evidence assembled during the House investigation provided a wealth of information that would continue to fuel speculation.

After recanting his guilty plea, Ray consistently maintained his innocence. In his 1992 memoir, he claimed to have been framed by a gun smuggler he knew as Raoul (sometimes spelled Raul). In 1993 William F. Pepper, who had become Ray's lawyer, sought to build popular support for a reopening of the case by staging a televised mock trial of Ray (the "jury" found Ray not guilty). Pepper later published Orders to Kill: The Truth Behind the Murder of Martin Luther King (1995), which cast suspicion on the FBI, local police, a local businessman allegedly linked to the Mafia, and military intelligence personnel assigned to Memphis at the time of the assassination. In 1997 members of King's family publicly supported Ray's appeal for a new trial, and King's son, Dexter Scott King, proclaimed Ray's innocence during a televised prison encounter. Despite this support, Tennessee authorities refused to reopen the case, and Ray died in prison on 23 April 1998.

Even after Ray's death, conspiracy allegations continued to surface. Despite several attempts, test bullets fired from the rifle linked to Ray were never conclusively matched to the slug removed from King's body. In March 1998, retired FBI investigator Donald Wilson claimed he had found pieces of paper in Ray's car with the name "Raul" on them. In 1999 Pepper won a token civil verdict on behalf of King's widow and children against Lloyd Jowers, owner of the Jim's Grill on the rooming house's ground floor, "and other unknown co-conspirators." Jowers had stated during a 1993 during an appearance on ABC-TV's Prime Time Live that he was given $100,000 to arrange King's murder. Although the trial produced considerable testimony that contradicted the original case against Ray, the Justice Department announced in 2000 that its own internal investigation, launched in 1998 at the King family's request, had failed to find sufficient evidence to warrant a full investigation. In April 2002, at a news conference in Gainesville, Florida, the Reverend Ronald Denton Wilson announced that his deceased fervently anticommunist father, Henry Clay Wilson, had spoken of killing King with the aid of two other conspirators after Ray supplied the weapon, but this claim was also met with widespread skepticism.