In October and November of 1986, it was discovered that for several years, agents of the United States government had been running an illegal operation to sell weapons to Iran and funnel the profits to the Contras, a military organization dedicated to overthrowing the leftist government of Nicaragua. In December, 1986, Lawrence E. Walsh was appointed independent counsel by the U.S. Court of Appeals for the District of Columbia Circuit. (An independent counsel is a prosecutor appointed by the Court of Appeals at the request of the Attorney General of the United States to investigate suspected crimes by members of the executive branch of government.) During the early phases of the investigation, a cover-up was attempted 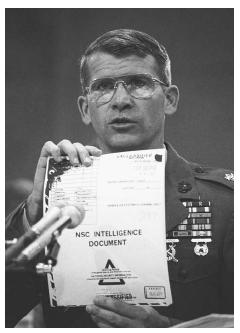 by the Reagan administration. In the words of Walsh's final report, "following the revelation of [the Iran-Contra] operations in October and November 1986, Reagan Administration officials deliberately deceived the Congress and the public about the level and extent of official knowledge of and support for these operations."

The Iran-Contra investigation lasted from 1986 to 1994. During this period, Walsh charged 14 Reagan Administration officials with criminal acts. He obtained convictions and guilty pleas in 11 cases. Two convictions were overturned on a technicality, and several officials, including Secretary of Defense Caspar Weinberger, were issued pre-trial pardons by President George H. W. Bush during the "lame duck" period following his electoral defeat in 1992. Walsh's investigation concluded that "the sales of arms to Iran contravened United States Government policy and may have violated the Arms Export Control Act," that "the provision and coordination of support to the Contras violated the Boland Amendment ban on aid to military activities in Nicaragua" (passed by Congress in 1984), and that "the Iran operations were carried out with the knowledge of, among others, President Ronald Reagan, Vice President George H. W. Bush, Secretary ofPage 156  |  Top of Article State George P. Schultz, Secretary of Defense Caspar W. Weinberg, and Director of Central Intelligence William J. Casey." Walsh did not did not have legal power to bring charges against President Reagan or Vice President George H. Bush, as the Boland Amendment was not a criminal statute containing specific enforcement provisions. Congress did not exercise its power to impeach.

Historical background. In 1979, the Somoza dictatorship in Nicaragua was overthrown by a left-wing revolutionary group calling itself the Sandinistas (after Nicaragua revolutionary leader Augusto Cesár Sandino, 1893–1934). Soon after taking office in 1981, President Ronald Reagan ordered the Central Intelligence Agency (CIA) to secretly fund and equip the Contras, mostly former members of the Somoza military who sought the overthrow of the Sandinista government, and who were operating from bases in Honduras and Costa Rica (to the north and south of Nicaragua, respectively). On December 8, 1982, a bill was passed by the U.S. House of Representatives forbidding U.S. covert actions "for the purpose of overthrowing the government of Nicaragua;" some funding for the Contras was still allowed. Some of the Congressional reluctance to give U.S. support to the Contras arose from their unsavory tactics. As General John Galvin, commander of the U.S. Southern Command, testified to Congress, the Contras were directed by the CIA to "[go] after soft [i.e., undefended] targets … not to try to duke it out with the Sandinistas directly." In practice, this meant attacking medical clinics, schools, farmer's cooperatives, and other undefended elements of the civil infrastructure, causing almost exclusively civilian casualties.

In May, 1984, Congress discovered that its 1982 restrictions had been disregarded by the Reagan administration. CIA agents, acting at the behest of National Security Council member Oliver North, had been placing mines in Nicaraguan harbors despite the Congressional ban on such activities. Consequently, Congress cut off all funding for the Contras and passed the Boland Amendment, a statute prohibiting any U.S. agency involved in "intelligence activities" from "supporting, directly or indirectly, military or paramilitary operations in Nicaragua by any nation, group, organization or individual."

The "Enterprise." Direct and indirect support for the Contras continued in spite of the Boland Amendment, coordinated by Oliver North through a complex network he termed the "Enterprise." North's agents solicited money and arms for the Contras from three primary sources: (1) countries dependent on U.S. support, including South Africa, Brunei, Saudi Arabia, South Korea, and Israel; (2) wealthy Americans sympathetic to President Reagan's policies; and (3) weapons sales to Iran. The Reagan administration was secretly selling arms to Iran (in probable violation of the Arms Export Control Act of 1976, according to independent counsel Walsh); North's organization diverted money from these sales to the Contras. The Contras also raised money by allegedly selling large quantities of crack cocaine in the United States with CIA complicity. All these activities violated the Boland Amendment's ban on aid to military activities in Nicaragua, as well as other laws.

Administration support of the Contras became public knowledge when a Contra military supply plane was shot down over Nicaragua on October 5, 1986. An American crew member, Eugene Hasenfus, was taken prisoner and revealed that he was a CIA agent. A month later, a Lebanese newspaper exposed the Reagan administration's secret sales of arms to Iran. On November 25, 1986, Justice Department officials went public with the information that these two news items were linked: proceeds from the Iranian arms sales has been diverted to the Contras.

At this stage, what independent counsel Walsh characterized in his official report as "a new round of illegality" began: "Senior Reagan administration officials engaged in a concerted effort to deceive Congress and the public about their knowledge of and support for the operations."

Outcome of the investigation. Fourteen officials were charged with criminal violations as a result of the Iran-Contra investigation. All individuals tried were convicted; one CIA official's case was dismissed because the government refused to declassify information needed for his defense; and two convictions were overturned on technicalities. A few of the most prominent persons charged, as described in the final report of the independent counsel, are listed below:

(3) Oliver L. North (Lieutenant Colonel, U.S. Marine Corps and Assistant Deputy Director for Political-Military Affairs of the National Security Council, 1981–1986): convicted of altering and destroying documents, accepting an illegal gratuity, and aiding and abetting in the obstruction of Congress.

(4) John M. Poindexter (National Security Advisor): convicted of conspiracy, false statements, falsification, destruction and removal of records, and obstruction of Congress. Poindexter's conviction on all counts was overturned on appeal on the grounds that although he lied to Congress, he did so while speaking under a guarantee of immunity. Independent counsel Walsh noted in his final report that North's and Poindexter's convictions were "reversed on appeal on constitutional grounds that in no way cast doubt on the factual guilt of the men convicted."

(5) Secretary of Defense Caspar W. Weinberger was charged with four counts of false statements and perjury. He was pardoned before trial by President George H. W. Bush, who also pardonedPage 157  |  Top of Article Elliot Abrams, Robert McFarlane, and two other men at the same time.

Aftermath. The Iran-Contra affair, like the CIA-organized invasion of the Bay of Pigs in Cuba in 1961, struck a global blow to American credibility. Officials at the highest level had been detected organizing international terrorism (i.e., the Contras), violating U.S. law, and lying under oath. However, like that of the Bay of Pigs before it, the long-term impact of the Iran-Contra affair on U.S. politics and foreign policy was slight, and the central figures in the controversy later enjoyed high-profile careers in both the public and private sectors.

Walsh, Lawrence E. "Final Report of the Independent Counsel for Iran-Contra Matters: Volume I: Investigations and Prosecutions." United States Court of Appeals for the District of Columbia, Division for the Purpose of Appointing Independent Counsel. August 4, 1993. <http://www.fas.org/irp/offdocs/walsh/ > (December 10, 2002).