The sermon, or khutba, serves as the primary formal occasion for public preaching the Islamic tradition. Sermons occur regularly, as prescribed by the teachings of almost all legal schools, at the noon (zuhr) congregation prayer on Friday, the weekly day of assembly, which it is incumbent upon all free and able adult male Muslim residents to attend. In addition, similar sermons are called for on the two festival days, or in response to an eclipse or excessive drought, although these sermons are expected to contain features relevant to the celebrations or the natural phenomena at hand. For instance, on ˓id al-fitr the preacher is charged to instruct the faithful concerning zakat, or almsgiving, while on ˓id al-adha he is to include remarks specifying rules for the sacrifice.

Sermons or related types of religious oratory may be pronounced in a variety of settings and at various times, but the term khutba, abbreviating the more ample expression khutba al-jum˓a, usually refers only to the address delivered in the mosque at these weekly and annual rituals. Other occasions of preaching may be described as a lesson (dars) or an admonition (wa˓z), and their formats would differ accordingly.

The khutba is believed to have its origins in the practice of the prophet Muhammad, who used to speak words of exhortation, instruction, or command at gatherings for worship in the mosque, which consisted of the courtyard of his house in Medina. However, the word khutba with this technical meaning does not appear in the Qur˒an. But one passage that Page 395  |  Top of Article explicitly alludes to the Friday noon prayer summons believers to "the remembrance of God" (dhikr Allah) [Q. 62:9], an expression that some commentators have regarded as denoting the sermon.

Building on this precedent, the khutba has been closely associated with authoritative discourse in several important ways. Initially, for example, the delivery of the Friday sermon was restricted to the caliph himself, or his official representatives such as provincial governors. Eventually, however, the task was delegated to others, chosen for their learning and eloquence, who then spoke in the ruler's name. From this relationship, the practice emerged that the preacher (khatib) was obliged to include within the sermon an explicit mention of the sovereign, normally in the form of a blessing upon him. This aspect of the sermon resulted in a political function for khutba as it became, notably in periods of great tension and instability, the moment for signaling a change of regime, a shift in loyalty, or a call for rebellion.

In modern times, the naming of a ruler in a Friday sermon has largely fallen into disuse, expect perhaps on patriotic occasions, although the established bond between the pulpit and political legitimacy has not disappeared. This deeply rooted relationship helps to account for the shape of controversies in many Islamic lands, where governments may variously, through financial subsidies or censorship, seek control over preachers, while some who contest this assertion in the name of reform or resistance may resort to sermons as effective vehicles for opinion formation and mobilization.

Another important way that sermons have expressed their authority derives from the physical context framing their presentation. Traditionally, as defined by classical legal treatises, Friday congregational prayers were restricted to urban centers and normally to one major mosque in each city. Such a site designated as a masjid jami˓, that is, a "Friday Mosque" or a "cathedral mosque," would typically be distinguished by its central location, extraordinary dimensions, and monumental architecture. This facility would also contain a number of symbolic furnishings indicative of its exalted stature, the most demonstrative of which was a ritual pulpit or minbar.

It was from this platform, possibly several meters high and frequently impressively built and adorned, that the sermon was proclaimed, and only the preacher would occupy it. Likewise, a number of fixed rubrics were to accompany the khutba. These specified such details as the preacher's dress, his posture, a sequence of standing and sitting, and the directive that he speak while leaning on a bow, a sword, or a staff. In the contemporary Islamic world, many of these archaic specifications may no longer be observed, while other culturally appropriate elements have been adopted. Most notably, both in largely Islamic lands and elsewhere, Friday congregational prayers with sermons are no longer restricted to a few central locations, but are common in mosques of all sizes and conditions, as well as being dispensed through newspapers and broadcast on radio and television. Moreover, a formidable market of sermons circulated on cassette recordings has emerged in recent decades, providing an especially appealing medium for dissident preachers who are denied access to official channels.

Finally, the khutba has drawn traditional authority from its conformity to a classically defined structure and rhetorical style. Recommendations regarding preaching arise, for instance, in certain hadith, such as the well-known dictum: "Make your prayers (salat) long and your sermon (khutba) short." But the recognized legal sources also specify set features and formulas for the validity of a khutba's performance. First, a Friday sermon must consist of two parts, sometimes referred to as two sermons, between which a pause occurs. Second, within the sermon, a preacher is obliged to pronounce the praise of God, blessings upon the Prophet, and prayers on behalf of the congregation. Third, he is to exhort his listeners to virtue, such as warning of judgment, and to recite from the Qur˒an.

Sermons were also to be delivered in classical Arabic, a linguistic requirement that not only assumed substantial training on the part of preachers if their sermons were to consist of original compositions, but a notable degree of education on the part of listeners, especially non-Arab Muslims, if the sermons were to be fully intelligible. Not surprisingly, this expectation of the khutba contributed to the growth of a literary genre consisting of model sermons, such as those by the renowned ibn Nubata (d. 984), which were committed to memory by some preachers and then recited with little adaptation. However, preaching in colloquial languages, while often retaining certain Arabic expressions, has become increasingly common. This, in turn, has led to disputes between traditionalists, who prefer classical Arabic, and revivalists, who insist that the sermon should be delivered in a language understood by the audience.

Like many elements of Islamic learning and piety in modern times, the sermon has been the object of concerted efforts at reform and revitalization. These efforts have led to a renewed scholarly interest in the history of the khutba and a widening enthusiasm regarding its use. 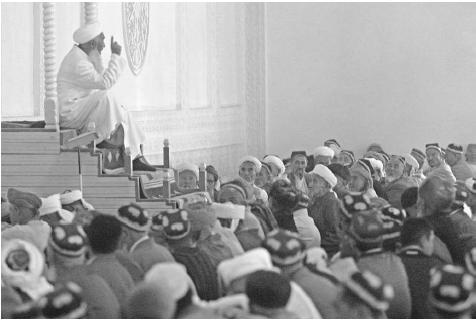 A mullah delivers a sermon, or khutba, in Termez, Uzbekistan. The majority of religious schools require a weekly khutba on Fridays, the Muslim day of assembly. All able male adults are expected to attend. AP/WIDE WORLD PHOTOS