Bunraku, named after the theater manager Uemura Bunrakuken (1737–1810), is the most revered of Japan's many forms of puppet theater (ningyo shibai). Three arts are intertwined in a performance: puppet manipulation (ningyo zukai), chanting of the dramatic text by a single narrator (tayu), and musical accompaniment by a single samisen (a three-stringed lute) player. The musical style is known as gidayu, after its creator, the chanter Takemoto Gidayu (1651–1714), or joruri, from a sixteenth-century narrative Joruri junidan (Twelve Tales of Princess Joruri) that became a popular puppet play. When the theater district in the city of Edo (now Tokyo) burned in 1657, many puppet troupes moved to Osaka, which thereafter became the center for puppet theater in Japan.

A sophisticated, professional puppet theater came into existence in the early eighteenth century when two theaters, the Takemoto-za and the Toyotake-za, competed with each other in Osaka's Dotonbori entertainment district. At the Takemoto-za, playwright Chikamatsu Monzaemon (1652–1724), chanter Takemoto Gidayu, and theater manager Takeda Izumo I (d. 1747) produced the first domestic play (sewamono) written for the puppets, Sonezaki shinju (The Love Suicides at Sonezaki, 1703), and history plays (jidaimono) such as Kokusenya gassen (The Battles of Coxinga, 1715). Chikamatsu's dramas are known for their beautiful language and psychological depth of characterization. In the 1730s, puppeteers created complex puppets whose eyes, eyebrows, mouth, hands and even fingers moved realistically. Each puppet required a team of three puppeteers responsible for movements of the head and right hand, the left hand, and the feet, respectively. Revolving stages and trap doors created magical special effects. Exciting all-day plays were written to take advantage of the new technical developments. Over a period of three years, Takeda Izumo II (1691–1756), Namiki Senryu (1695–1751), and Miyoshi Shoraku (1696–1775) jointly wrote the "Three Great Masterpieces" of puppet drama for performance at the Takemoto-za: Sugawara denju tenarai kagami (The House of Sugawara, 1746), Yoshitsune senbon zakura (Yoshitsune and the Thousand Cherry Trees, 1747), and Japan's most famous revenge play, Kanadehon chushingura (The Treasury of Loyal Retainers, 1748). At the Toyotake-za, Ichinotani futaba gunki (Chronicle of the Battle of Ichinotani, 1751) was so popular with audiences that it ran for twelvePage 378  |  Top of Article 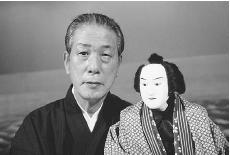 Famous Japanese puppeteer Yoshida Tamao holds a Bunraku puppet, c. 1979. (JACK FIELDS/CORBIS) months. Kabuki troupes quickly mounted live versions of the plays, retaining the chanted narrative and thus adding gidayu music to their other styles. In the mid-eighteenth century, Bunraku's popularity rapidly declined as the scale of competing Kabuki productions became ever more lavish and spectacular. From the middle of the nineteenth century to the present time, a single puppet troupe continued the Bunraku tradition in Osaka.

Bunraku puppet dramas have high literary value and are performed for adult audiences. The team of chanter and accompanying samisen player, which changes at the beginning of each scene, sets the pace and mood of a performance, while puppeteers follow the tempo and emotion of the music. The chanter is so important that chanting without puppets (sujoruri) can be staged. Puppeteers spend up to thirty years learning to create natural, human movements with the puppets. The spectator sees, in addition to four or five puppet characters, a dozen or more puppeteers surrounding them and the chanter's facial expressions that powerfully convey anger, laughter, or anguish. In order to infuse the inanimate puppets with life, the chanter uses a richly emotional vocal style that draws audience attention to him. Therefore, the spectator's perception of a "character" in drama is multifaceted, created from all of the components of the performance. In especially important scenes, five or six chanters may be seated onstage, each taking the voice of one character, a technique that was borrowed from the first-person acting of competing Kabuki theaters.

Today, a single Bunraku troupe, subsidized by the Ministry of Education, is housed in the new National Bunraku Theater in Osaka. The troupe performs a repertory of traditional plays in Osaka, Tokyo, and other cities, usually for runs of two or three weeks.