The principal traditional dramatic genres of Thailand are khon (masked drama), lakhon (dance-drama), likay (folk opera), nang (shadow theater) and hun (puppet theater). While there is a secondary school that specializes in training children to become classical performers, opportunities to pursue a career in traditional theater are extremely limited, for public performances are few and far between. Thai scholars writing in the 1930s often lamented the decline of traditional theatrical genres. Attempts to revive and revitalize the traditions have had limited success, although drama continues to be widely promoted as a symbol of national identity. Images of Thai classical drama are represented widely in advertisements and greeting cards in the form of souvenir dolls, ornamental khon masks, and miniature shadow puppets, while much-abbreviated performances are staged in restaurants for the benefit of foreign tourists.

The origins of khon are uncertain, but the prototype is generally believed to have existed in the fourteenth century CE. The most distinctive feature of khon performances is that nearly all the actors, with the exception of those taking female roles, wear elaborately painted masks. Performances are based on episodes in the Ramakien (the Thai retelling of the Hindu epic the Ramayana), with battle scenes in which the hero Phra Ram vanquishes the villain Thotsakan particularly popular. It is a convention of Thai theater, however, not to portray Thotsakan's death onstage, as it is believed 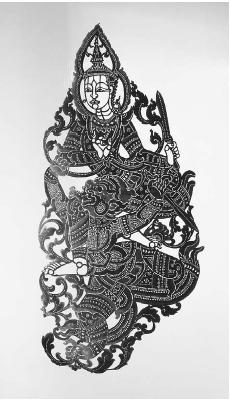 A Buddhist puppet used in Thai drama. (WERNER FORMAN/CORBIS) to bring misfortune. The story is narrated in verse by a chorus and there is an accompanying musical ensemble. The style of dancing and martial posturing, unlike the lakhon style mentioned below, puts emphasis on leg and body movements rather than refined hand gestures. Until the 1930s all parts were taken by male actors.

Lakhon emerged during the Ayutthaya period (1351–1767). It is subdivided into lakhon nok (dance-drama of the outside), performed outside the royal court, and lakhon nai (dance-drama of the inside), performed within the royal court. The differences between the two lie in the stories performed, style of dancing, musical accompaniment, and costume. ThePage 298  |  Top of Article stories performed in lakhon nai are taken from the epic poems known as the Ramakien, Inao, and Unarut. Traditionally, and as still practiced, women took both male and female parts, with men confined to playing the part of clowns. Performers do not wear masks unless taking the part of monkeys or demons; graceful arm movements and elaborate hand gestures are the outstanding characteristics of the dance movements, which are accompanied by an offstage chorus and a small orchestra. By contrast, lakhon nok is a folk dance–drama that employs faster dance movements, more action, and scenes of comedy and melodrama; its repertoire is drawn from the jataka tales (tales of the past lives of the Buddha). Lakhon nok was traditionally performed by an all-male cast but later by mixed casts.

Likay is a part of traditional popular "low culture." It appeared toward the end of the reign of Rama V (1868–1910), blending elements of lakhon nok with music, singing, and dancing of Indian or Malay origin. A likay troupe traditionally consisted of a mixed cast of between twelve and forty players and musicians. It would normally perform on a makeshift stage at temple fairs, markets, and other public gatherings, using garishly painted backdrops for scenery. Its repertoire was drawn from well-known historical tales, folktales, and literary works, featuring an array of kings, clowns, and star-crossed lovers. The likay audience, which tended to be made up largely of lower-class women, did not expect highly stylized and polished performances from the comically overdressed and gaudily made-up cast. Likay's charm came from its brashness, its vulgarity, the amateurishness of the untrained performers' movements, and the often-bawdy improvised dialogue; and at the same time it provided a relaxed backdrop for gossiping, eating, drinking, and chewing betel. Today likay is a rapidly dying art form; although it could still be seen and heard regularly on the television and radio in the 1980s, it faces ever increasing difficulty in competing to attract young audiences away from newer, more sophisticated forms of entertainment.

Nang is the traditional Thai shadow play, developed during the Ayutthaya period; it employed large, elaborately drawn figures or scenes, usually taken from the Ramakien, which were embossed on dried buffalo hide and painted. They were then mounted on two sticks so that they could be held up, either in front of or behind an illuminated white sheet, which served as background. A chorus narrated the story while the shadow puppets were moved across the screen by men who adopted dancing postures and steps to fit in with the story. It has been speculated that the shadow theater was a possible precursor of the khon masked drama, which was likewise originally performed before a screen, and in which the masked characters still try to present a side profile to the audience rather than a full face. Another kind of shadow theater, nang talung, which originated in southern Thailand, employed much smaller figures, each of which had one arm that moved. The first surviving references to nang talung are during the reign of Rama V, when it was introduced to Bangkok, but its origin was doubtless much earlier.

Now resurrected only occasionally, this traditional puppet theater, which dates from the nineteenth century, was confined to the royal elite. The string puppets were beautifully crafted and dressed in elaborate costumes; unlike Western puppets, their legs and arms were manipulated from below. Plays were taken from classical tales. A new form of puppet theater, hun krabok, emerged during the reign of Chulalongkorn (Rama V; reigned1868–1910) in which the puppets' arms and legs were manipulated by bamboo rods; plays performed in this style usually offered scope for slap-stick humor and the genre continued to enjoy some popularity up to the late 1940s. In recent years university drama departments have played an important role in trying to preserve the dying art of hun krabok.

During the reign of Chulalongkorn there was an attempt to introduce a "sung drama," lakhon rong, imitating Western operetta, while Rama VI (reigned 1910–1925) actively wrote and promoted Western-style plays, termed lakhon phut, as a means of promoting patriotism. In the 1930s the nationalistic plays of Luang Wichitwathakan were given government support, while less didactic plays began to appear during the 1940s when the import of foreign films was banned. Today, live Western-style plays are produced almost exclusively in university drama departments and reach only a very limited audience.

Rutnin, Mattani Mojdara. (1993) Dance, Drama, and Theatre in Thailand: The Process of Development and Modernization. Tokyo: The Centre for East Asian Cultural Studies for UNESCO.