The relations between Iran and the United States have experienced major transformations since the Iranian revolution of 1978–1979 and the overthrow of the pro-Western monarchy in Iran. In 1953, Shah Mohammad Reza Pahlavi (1919–1980) was restored to the throne (following his deposal by his popular prime minister, Muhammad Mosaddeq) by a military coup organized and funded by the United States and British intelligence agencies. The shah gradually developed close relations with the United States in political, economic, and military areas, and Iran became one of the most significant U.S. allies in the Third World.

The alliance between the two nations reached its zenith during the presidency (1969–1974) of Richard M. Nixon (1913–1994). The shah and President Nixon developed a close personal relationship. This helped cement the already close alliance between Iran and the United States, and Iran became the largest purchaser of advanced U.S. weaponry outside of the member nations of the North Atlantic Treaty Organization (NATO). Notwithstanding the shah's efforts to reap the benefits of his close ties with the United States, he was never able to establish legitimacy for his rule, largely due to the perception that he had become an agent of the West, promoting outside interests in the Middle East at the expense of his own nation. When the uprising in January 1979 succeeded in forcing the shah to flee Iran, the United States, as his closest benefactor, was dealt a heavy blow.

After a few months, diplomatic relations between the United States and Iran were strained beyond repair after a group of student militants stormed the U.S. Embassy in Tehran on 4 November 1979 and took its staff hostage. This action was ostensibly taken to protest the shah's admission to the United States for cancer treatment. The militants saw the shah's admission as yet another attempt by the United States to restore the shah to his throne after another popular uprising against his regime. The hostage crisis, which lasted 444 days, consumed President Jimmy Carter (b. 1924), who failed to gain the release of the hostages.

The budding anti-Iran Arab coalition organized informally by the United States during the Iran-Iraq War was shattered after Saddam Hussein invaded Kuwait in August 1990. With the massive deployment of U.S. troops in the Persian Gulf and the ensuing war against Iraq, Iran emerged from its regional isolation. Even the United States began sending feelers toward Iran in the hope of gaining its support in the Persian Gulf War. Although Iran did not join the coalition of nations fighting against Iraq, it did not undertake any measures to undermine the U.S.-led war efforts. A window of opportunity to improve relations between Iran and the United States had opened.

From Dual Containment to the Axis of Evil

Notwithstanding some hopeful developments in the immediate period of the Persian Gulf War, relations between the United States and Iran further deteriorated after the United States adopted its so-called dual containment policy during the first term of the presidency (1993–2001) of Bill Clinton (b. 1946). This Page 121  |  Top of Article 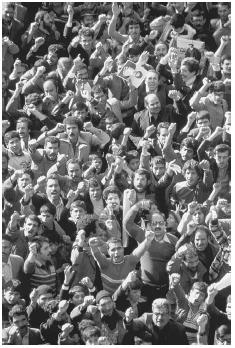 Iranians demonstrating outside the United States embassy in Tehran during the Islamic Revolution in 1979. (BETTMANN/CORBIS) policy was designed to isolate both Iran and Iraq, preventing economic and trade ties as well as political relations between the United States and these two nations. It also called for punishment of non-U.S. third parties that invested in the petroleum industries of the targeted nations. The policy proved to be impractical and counterproductive. Most of America's major allies expressed varying degrees of opposition to this policy, especially when it affected their commercial interests and political sovereignty. Toward the end of Clinton's presidency, it was clear that dual containment had not achieved its goal with respect to Iran. As a consequence, the Clinton administration sought to find avenues to engage the moderate elements within the Iranian government who had come to power as a result of the landslide victory of Mohammad Khatami (b. 1943), the reformist cleric who became Iran's president in 1997. Years of mistrust and political animosity between the two governments again made improvements in relations impossible.

The U.S.-led war in Afghanistan and the campaign against terrorism again presented a unique opportunity for Iran and the United States to improve their relations. After an initial period of cooperation between the two nations, their relations deteriorated when President George W. Bush (b. 1946) included Iran as a node in his "Axis of Evil" State of the Union address in January 2002. Again, America's major allies took exception to this categorization and expressed their determined policy of engaging, not isolating, Iran.

Several areas of mutual interest should create close ties between the two nations. Iran is a significant oil producer, and its location makes it a major player in the Middle East and Central Asia/Caspian basin regions. Under the right circumstances, Iran can play a major role in stabilizing Afghanistan and can contribute to the Arab-Israeli peace process. However, its divided government and internal factional disputes have prevented it from advancing its foreign policy interests. In many ways, the current stalemate between the United States and Iran benefits neither nation.

Alikhani, Hossein. (2000) Sanctioning Iran: Anatomy of a Failed Policy. London: I. B. Tauris.

Bill, James A. (1988) The Eagle and the Lion: The Tragedy of American-Iranian Relations. New Haven, CT: Yale University Press.