Kabuki is one of two major forms of commercial theater created by actors and playwrights for audiences of urban commoners during the Edo or Tokugawa period (1600/1603–1868) in Japan.

In 1600, an attractive woman dancer, Okuni, captivated spectators in the capital city of Kyoto by singing sensuous love songs and acting in comic-erotic sketches. Her dance while dressed as a male samurai, called Kabuki (kabuku, "slanted"), was the rock or punk performance of the time. Later "ka-bu-ki" came to be written with the Japanese characters for "music-dance-acting," thus Page 294  |  Top of Article 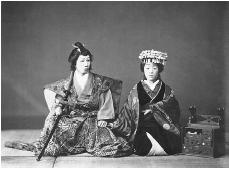 Two Kabuki actors in the 1890s. One portrays a samurai and the other a woman. (MICHAEL MASLAN HISTORIC PHOTOGRAPHS/CORBIS) identifying the three arts basic to Kabuki performance. Government edicts banning women and boys from the stage in 1629 and 1652, respectively, resulted in adult males taking female roles (onnagata, "woman's form"), a happenstance that contributed to creating Kabuki's unusual sensuous appeal.

During the Genroku era (c. 1688–1720), Sakata Tojuro (1644–1709) created the gentle style (wagoto) of acting romantic leads that suited the refined tastes of Kyoto audiences. His most famous role was in Kuruwa bunsho (Love Letter from the Licensed Quarter, 1678), written for him by Chikamatsu Monzaemon (1653–1724). The martial spirit of the city of Edo is reflected in the masculine style of bravura acting (aragoto) created by Ichikawa Danjuro I (1660–1704) and his son Danjuro II (1688–1738), in plays that featured heroes of superhuman strength. Danjuro I himself wrote Narukami (Narukami the Thunder God, 1684) and Shibaraku (Wait a Moment! 1692). Danjuro II melded the Kyoto and Edo acting styles when he created the dashing hero in Sukeroku yukari no Edo zakura (Sukeroku: Flower of Edo, 1713). In the nineteenth century, a new form of gritty "raw domestic dramas" (kizewamono) reflected the declining authority of the shogunate and the disintegration of feudal morality. In Sakura hime azuma bunsho (The Scarlet Princess of Edo, 1813), by Tsuruya Nanboku IV (1755–1829), and Benten kozo (Benten the Thief, 1862), by Kawatake Mokuami (1816–1893), the leading roles were thieves and murderers drawn from society's underclass.

Kabuki developed over some three hundred years as a spectacular theater art for rich and poor alike. Dazzling productions in large, indoor theaters made use of mechanical stage lifts, revolving stages, and impressive stage tricks—flying in the air, real rain, and instant costume changes. Performances began at dawn and continued until dusk. Adjoining teahouses provided tea, sake, food, and tobacco, as spectators socialized and watched the dramas unfold on stage. Six programs a year matched Japan's calendar of religious festivals. The season began in November with the important "face showing" (kao mise) play that introduced the theater's acting company and ended the following September with an autumn "remembrance play" (nagori kyogen), when spectators bid farewell to departing actors. The three plays in a program typically included a multiact history piece ( jidaimono) that featured samurai or nobility, followed by a shorter domestic piece (sewamono) that dramatized the lives of commoners. A dance play accompanied by music in nagauta, kiyomoto, tokiwazu, or takemoto style followed either the first or the second play. This could be a solo dance (shosagoto), such as Musume Dojo-ji (The Maid of Dojo Temple, 1756), to show off the skills of an onnagata actor, or a dance drama (buyogeki) like the highly dramatic Kanjincho (The Subscription List, 1841). Some dance plays were based on fifteenth- to sixteenth-century masked Noh plays, and about one-third of the repertory was adapted from plays written for the Bunraku puppet theater, Japan's other traditional commercial theater form.

Some important themes in Kabuki plays are the moral conflict between duty (giri) and human compassion (ninjo) and the plight of lovers driven by circumstance to take their lives (shinju). Powerful acting techniques include a dynamic "frozen moment" pose (mie), leaping exit (roppo) along the bridgeway (hanamichi) from the stage through the auditorium, beautifully choreographed fights (tate or tachimawari), and musicalized speech in poetic passages written in phrases of seven and five syllables (shichigo-cho). The black-robed stage assistant (koken) of Kabuki, who assists the actor with properties and costume on stage, is known throughout the world.

In the twenty-first century, Kabuki continues to be one of Japan's most honored theater forms. Month-long programs can be seen at the Kabuki-za and the National Theater in Tokyo, the Shochiku-za in Osaka, and the Minami-za in Kyoto.

Kawatake, Toshio. (1990) Japan on Stage: Japanese Concepts of Beauty as Shown in the Traditional Theatre. Tokyo: 3A Corporation.