Noh is a highly refined Japanese theater form combining drama, dance, music, and poetry. In the latter half of the fourteenth century, the actor and playwright Kanze Kan'ami Kiyotsugu (1333–1384) and his son, Kanze Zeami Motokiyo (1363–1433), moved Noh beyond its popular roots, incorporating the aesthetics of the military elite who patronized the art. This father and son team is responsible for many of the approximately 250 plays in the active repertory today. Plays are in one or two acts, and generally focus on an event in the life of one (usually masked) main character (shite), frequently a historical or legendary figure. A secondary character 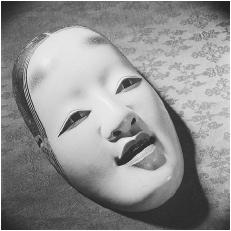 A Noh mask of noble beauty. (HORACE BRISTOL/CORBIS) (waki), often a traveling priest, serves as a catalyst for the shite to reveal his or her story. A sevento tenmember chorus, seated on the left side of the stage, chants narrative sections and takes over the lines of the shite and waki at emotional peaks. The actors are male; masks and costumes indicate the sex, age, and mental state of the character being portrayed.

Many Noh plays include an interlude, performed by a kyogen actor (kyogen are comic spoken dialogue plays, performed between Noh plays or independently), which provides background information or summarizes the action of the play in colloquial language. A musical ensemble sits upstage center and accompanies the entire play.

There are 257 kyogen plays in the active repertory. They feature stock characters such as masters and conniving servants, tricksters and country bumpkins, inept warrior priests, overbearing wives, humorous demons, and felicitous deities. Unlike the highly literary scripted Noh plays, for hundreds of years kyogen plays were improvised based on skeletal outlines; they only began to be written down in the seventeenth century.

Noh and kyogen also have many things in common. Both are performed on a Noh stage—a long passage-way (hashigakari) connecting to a main stage area that is approximately five square meters. The rear wall of the roofed stage depicts a large pine tree, and massive earthenware jars beneath the raised wooden floor amplifyPage 338  |  Top of Article sound. A limited number of types of costume pieces, silk in Noh and linen in kyogen, are combined in different ways for various characters. Scenery is not used, as setting is created by the words or actions of the actors, and use of props is minimal. Both forms have been passed down from father to son for over six hundred years, are maintained by several important families, and remain vibrant forms of theater today.