The works of 19th-century American sculptor and illustrator Frederic Remington (1861-1909) recall the rough-hewn frontier life of the American West.

Frederic Remington is the artist most closely identified with subjects of the American West during the closing decades of the 19th century. His drawings, paintings, sculptures, and writings present realistic and highly detailed depictions of many aspects of frontier life, including cowboys taming broncos, cavalry soldiers engaged in battle, and Native American warriors and scouts. According to Harold McCracken in his Frederic Remington's Own West, "The name of Frederic Remington has become synonymous with the realistic portrayal of our Old West. His impressive paintings, drawings and works of sculpture of the early day frontiersmen, cowboys and Indians are today well established as pictorial documentations of the most colorful and virile, as well as the most popular chapter in American history."

Born in Canton, New York, in 1861, Remington was the only child of Clara B. Sackrider and Seth Pierre Remington, a journalist who served as a Union cavalry officer during the American Civil War. In 1873 the family moved to nearby Ogdensburg, a port city on the St. Lawrence River, where Seth Remington became a customs official. Young Remington was educated at Vermont Episcopal Institute in Burlington and later attended the Highland Military Academy in Worcester, Massachusetts. Although he had expressed some interest in pursuing a journalistic career, Remington entered Yale University as a student in the Page 345  |  Top of Article 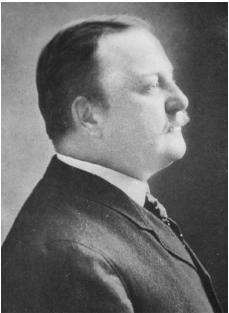 School of Fine Arts in 1878. While he was determined to pursue a career as an illustrator, he chafed under the constraints of formal art training and particularly resisted the academic practice of drawing from plaster casts rather than from nature. At Yale, in addition to his studies, Remington participated in boxing and football as a member of the 1879 team, then captained by Walter Camp, later known as the "father of football."

First Experiences in the West

Remington left Yale in 1880 when his father died. Acting on a long-held fascination with the frontier, he made his first extended trip into the West-specifically to the Montana Territory-in 1881 and on his return East sold his first sketches to Harper's Weekly. In a 1905 article in Collier's he later recalled his early inspiration for depicting Western subjects, stating: "I knew the wild riders and the vacant land were about to vanish forever….And the more I considered the subject, the bigger the forever loomed. Without knowing exactly how to do it, I began to try to record some facts around me, and the more I looked the more the panorama unfolded … I saw the living, breathing end of three American centuries of smoke and dust and sweat."

With a $9, 000 inheritance from his father, the 21-year-old Remington travelled West again, determined to seek his fortune. He bought a sheep farm in Kansas in 1883, but this venture proved a failure, and Remington sold it the spring of 1884. He next embarked on a sketching trip to the Southwest, returning to Kansas City to invest in a saloon. He married his Ogdensburg neighbor Eva Adele Caten, whose father had earlier refused a proposal by the unemployed artist, and with her settled in Kansas City. However, Remington's investment in the saloon proved an unfortunate one, and within months Eva Remington had returned to her parents' home. Remington set out on another tour of the Southwest, sketching subjects in Arizona and in the Indian Territory.

Career as a Magazine Illustrator

In late 1885 Remington sold two sketches to Harper's Weekly owner Henry Harper, and he settled in New York City to pursue a career as a magazine illustrator. He reunited with his wife and enrolled in the Art Students League in 1886 to refine his technical skills. The following summer Remington returned to the West, but on this occasion his trip was financed by Harper's, which commissioned a series of illustrations covering the Indian Wars. These works, depicting clashes between U.S. troops commanded by General Nelson Miles and their Native American opponents, were published weekly in the magazine and proved highly popular with readers. As a magazine illustrator, Remington's reputation grew quickly. Among his chief subjects were cowboys, cavalry soldiers, Native Americans, and settlers, whom he depicted in realistic war scenes as well as engaged in the ordinary activities of camp life.

In 1888 Century magazine commissioned a series of sketches and articles focusing on the adjustment of Native Americans to reservation life. Beginning with these reports, Remington became a regular and well-recognized writer on Western subjects both in journalism and in fiction. He subsequently served as a journal correspondent during the Indian Wars of 1890-91, in Russia and Algiers in 1892 and 1893, and in Cuba during the Spanish-American War. His principal writings include Pony Tracks (1892), the short-story collections Crooked Trails (1898), Sundown Leflare (1899), and Men with the Bark On (1900), and the novels John Ermine of the Yellowstone (1902) and The Way of an Indian (1906). In 1897 Theodore Roosevelt, who had admired Remington's illustrations since they accompanied Roosevelt's own documentary series "Ranch Life and the Hunting Trail" in Century, praised Remington's literary skill in a letter quoted by McCracken in Frederic Remington's Own West, a collection of Remington's stories and journalism. Roosevelt told Remington: "You come closer to the real thing with the pen than any other man in the western business…. Somehow you get close not only to the plainsman and soldier, but to the half-breed and Indian…. Literally innumerable short stories and sketches of cowboys, Indians, and soldiers have been, or will be written. Even if very good they will die like mushrooms, unless they are the very best, but the very vest will live and will make the cantos in the last epic of the Western Wilderness…. Now, I think you are writing this 'very best' ….You have struck a note of grim power."

A Shift to Painting

Also in the mid-1880s Remington moved from illustration to water-color and oil painting. The transformation from magazine illustrator to fine artist required Remington Page 346  |  Top of Article to apply himself to learning the intricacies of color, a task he found daunting. He remained devoted to Western subjects, using photography and studies produced on numerous excursions into the frontier as guides for more permanent works, which he completed in his studio in New Rochelle, New York. His oil A Dash for the Timber (1889), which depicts cowboys fleeing on horseback from Native warriors, is seen to demonstrate many of the notable qualities of Remington's art of this period, including strong narrative content, masculine energy, and realistic detail. After 1900 he experimented with a subtler and more limited palette in such nocturnal scenes as The Old Stagecoach of the Plains. In 1903 he was awarded an exclusive contract with Collier's to provide a painting for each monthly issue of the magazine, and this agreement provided Remington with a secure income. Commenting on his paintings in 1903, Remington told Edwin Wildman in Outing: "Big art is a process of elimination…. Cut down and out-do your hardest work outside the picture, and let your audience take away something to think about-to imagine…. What you want to do is just create the thought-materialize the spirit of a thing." The final years of Remington's life saw the production of a number of impressionistic works, but he never fully adopted the techniques of Impressionism or eliminated the narrative element from his works.

In 1895 Remington began sculpting in bronze, a medium that he believed would prove more lasting than illustration or painting. He wrote to his friend the novelist Owen Wister at the time, "My oils will all get old mastery-that is, they will look like pale molasses [sic] in time-my watercolors will fade-but I am to endure in bronze-even rust does not touch.-I am modeling-I find I do well-I am doing a cowboy on a bucking bronco and I am going to rattle down through all the ages." The work he described, The Bronco Buster (1895), won immediate praise from contemporary art reviewers, and Remington produced another 24 sculptures in the remaining years of his career. Among the most recognized of these is the 1902 multifigured work Coming through the Rye, which was based on Remington's earlier drawing Cowboys Coming to Town for Christmas. Depicting four exuberant horsemen riding close together in obvious revelry, the work has, in the words of Michael Edward Shapiro in his Frederic Remington: The Masterworks, "become an icon, and its emblematic role transcends its flaws. Etched into popular consciousness in a way that is rare in the annals of American sculpture, it has been widely accepted as an image of the untrammeled life of the West."

In addition to numerous trips into the American West, Remington also visited Canada and Mexico in pursuit of the subjects of his art. He produced nearly 3, 000 drawings and paintings, 25 sculptures, and eight volumes of writings throughout his career. He died December 26, 1909 following an emergency appendectomy that was performed at his home in Ridgefield, Connecticut.

Remington's works are housed in the Remington Art Memorial, in Ogdensburg, New York, as well as in such institutions as the Art Institute of Chicago, the Metropolitan Museum of Art, the Amon Carter Museum of Western Art, and the Whitney Gallery of Western Art, among others. According to Peter Hassrick in The Way West: Art of Frontier America, "The scope of Remington's art was truly remarkable, " and he noted that "In his career after 1900, Remington served also as a bridge between the tradition of narrative Western art and a new sensitivity toward the quiet passing of the frontier." McCracken, recognizing Remington's continuing appeal to Western enthusiasts and art collectors in the later 20th century, concluded, "In his pictures and his writings, Remington left for the benefit of the generations that follow him, what is beyond doubt one of the most comprehensive documentary records of our Old West and its transition into the limbo of history-and for this alone he deserves our everlasting gratitude."