CARRACCI FAMILY (Annibale, 1560–1609; Agostino, 1557–1602; Ludovico, 1555–1619), Italian painters. The careers of the Carracci family of painters from Bologna—the brothers Annibale and Agostino, and their elder cousin Ludovico, straddled the sixteenth and seventeenth centuries both chronologically and stylistically. Among the first generation of artists to come of age after Giorgio Vasari had published his history of Italian art, the Carracci were intensely conscious of their own positions within the stylistic progressions, local traditions, and pantheon of great painters set forth by Vasari. Collectively the Carracci are best known for reforming the tenets of painting, rejecting the frigid artificiality of late mannerism prevalent in Bologna, and introducing into their art emotional warmth and freedom of handling, a dynamic and nuanced treatment of light and color, as well as a commitment to direct observation of nature. They are credited with joining the previously immiscible qualities of light and color characteristic of northern Italian painting with the firmness of design and precision of drawing found in central Italian art.

The earliest years of the Carracci are poorly documented. Their biographers, the Bolognese Carlo Cesare Malvasia and the Roman Giovanni Pietro Bellori, are rich, but not unbiased, sources. In the early 1580s all three Carracci traveled to Parma and Venice, and Ludovico also visited Florence. By 1583 the Carracci had set up a workshop headed by Ludovico. Remarkably, they also established an academy in their quarters, first called the Accademia dei Desiderosi ('desirous of learning and achievement'), and later the Accademia degli Incamminati ('those who were on the way'). Although it was a private family academy, and operated rather informally, it was constituted with a serious pedagogical program and a commitment to the theory as well as practice of art. An emphasis on drawing from life was complemented by the study of optics, perspective, and anatomy. Incubated in the academy were new conceptions of genre painting, exemplified by Annibale's broadly painted, caught-in-midaction Bean Eater (Rome, Colonna Gallery), and landscape painting, the latter fueled by drawings done on the spot, out-of-doors. Caricature is purported to have been invented by Annibale, and practiced in the academy, but the best surviving examples are by Agostino. While Agostino had first specialized as an engraver, and his production as a printmaker is important and extensive, he subsequently joined his family in their collective enterprise.

The young Carracci collaborated on numerous projects in Bologna, most notably the frescoed friezes of the story of Jason in the Palazzo Fava, about 1593, and the founding of Rome in the Palazzo Magnani, about 1590. When asked who had done each scene, the Carracci, having freely traded ideas and sketches, and having worked elbow to elbow, are claimed to have responded, "Ella e dei Carracci; L'abbiam fatto tutti noi" (It is by the Carracci, we did it together). Such intimate collaboration, in which the individual style was sublimated in favor of a seamless, lively, and highly illusionistic effect, is characteristic of the Carraccis' early period. During this time each of the Carracci also painted several major altarpieces that opened the way for the baroque style of painting in northern Italy, among them Annibale's Baptism of Christ (Parma), Agostino's Last Communion of St. Jerome (Pinacoteca Nazionale, Bologna), and Ludovico's Vision of St. Hyacinth (Louvre).

In 1595 Annibale moved to Rome, answering a request from Cardinal Odoardo Farnese for the Carracci to decorate his immense family palace. Agostino later joined his brother in the execution of Annibale's greatest project, the frescoed vault of the Farnese Gallery. Annibale's vivid evocation of a picture gallery on the theme of the loves of the gods is populated with nudes and classical statues come to life, and its architectural illusionism is irresistible. If its patron, Cardinal Farnese, failed to appreciate it fully, the ceiling nevertheless became one of the most highly esteemed works of art in Italy. Annibale Page 394  |  Top of Article 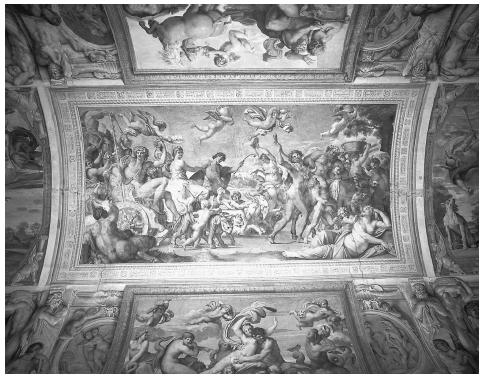 Carracci Family. The Triumph of Bacchus and Ariadne, part of the fresco cycle Loves of the Gods at the Palazzo Farnese, created c. 1597-1602 by Annibale Carracci. ©MASSIMO LISTRI/CORBIS had developed an unsurpassed ability to draw the human figure, a skill enhanced in the Farnese by a new monumentality derived from his study of Raphael, Michelangelo, and the antique statuary newly available to him in Rome. Blossoming about 1600, Annibale's new synthesis proved the most compelling and enduring model for the entire century of Italian painting to follow. In his last years Annibale's mental state deteriorated, hindering his productivity, but he continued to create powerful works in an austere and tragic key, often assisted by his devoted pupils Francesco Albani, Domenichino, and Sisto Badalocchio. Agostino, whose talents also included music and poetry, and who, unlike Annibale, enjoyed court society, spent his last years on the fresco decoration of Duke Ranuccio Farnese's Palazzo del Giardino in Parma. His natural son Antonio Carracci (1583?–1618) became a successful painter in Rome.

Ludovico, who remained in Bologna, was devoted to his teaching and to fostering a school of painting that would be the glory of Bologna. It was not by chance that his most important project, the painted cloister of San Michele in Bosco (ruined) was a showcase for the collaborative achievements of the family academy. Guido Reni, Domenichino, Francesco Albani, and Alessandro Algardi were among the major artists who passed through the academy, ensuring its place as the cradle of Italian baroque painting. Noted for his compositional and iconographic inventiveness, Ludovico's commitment to the naturalism of the early academy waned, and he had little use for Annibale's Roman classicistidealist Page 395  |  Top of Article idiom. Ludovico exploited the expressive effects of anatomical distortion and created images of intense and often irrational emotionalism. The sweet, diminutive figures of his earliest work gave way to an aggressive plasticity of forms deployed in dynamic compositions. His work grew ever more dramatic as he experimented with broken patterns of light and dark, and with what has been called his meteorological chiaroscuro. Ludovico's mature altarpieces filled the churches of Bologna and the surrounding region, eventually carrying the Carracci innovations throughout Italy.

Posner, Donald. Annibale Carracci: A Study in the Reform of Italian Painting around 1590. London and New York, 1971.