COMMEDIA DELL'ARTE. Commedia dell'arte is a term applied to both the early Italian commercial theater in general and to a format institutionalized by sixteenth-century professional actors' improvisations on a three-act scenario. The scenarios were constructed from a repertoire of plot types and movable parts (theatergrams) drawn primarily from novellas and scripted "erudite" comedies, set in contemporary city squares and representing love stories complicated by mistakes, deceits, parental opposition, and family separations.

In addition to singing and dancing, the players could counterfeit regional dialects and double in several roles while specializing in one of them. A standard troupe would include two pairs of lovers speaking Tuscan; several masked characters, including the old Venetian merchant Pantalone, the Bolognese Doctor Gratiano, at least two zanies, such as Page 9  |  Top of Article 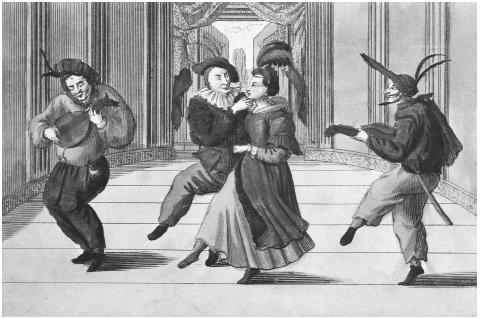 Commedia dell'Arte. An eighteenth-century engraving of commedia dell'arte actors on stage. The central pair are the Lovers, flanked by comic characters, or zanni. ©BETTMANN/CORBIS Bergamask Arlecchino, Fritellino, or later Neapolitan Pulcinella, Scaramuccia, and their like; boastful captains with bellicose names, such as Rodomonte, Spavento, or Matamoros; and a couple of maidservants. Innkeepers, Germans, gypsies, Turks, magicians, peddlers, and other occasional roles were added according to plot.

The first documented actors' troupe-for-hire was formed in Padua in 1545; by 1560 companies included women, and in the early 1570s several were touring abroad. Among the constantly merging prominent troupes were the Gelosi, the Desiosi, the Fedeli, the Confidenti, and the Uniti, at different times featuring leading performers of the day, the Andreini and Martinelli families, Diana Ponti, Vittoria Piissimi, and Flaminio Scala.

The professional troupes and their improvising style influenced the development of Italian drama and established a symbiosis with literary drama: the actors also memorized and performed five-act erudite comedies, tragedies, and pastoral plays, from which they borrowed for scenarios on which to improvise. Sometimes they even wrote in this format, while many literary dramatists enlivened their own works by drawing upon the commedia dell'arte's stock types, theatricality, movement, stage business, and gags, both verbal and visual.

The most successful players gained high patronage in Italian and related European academic and court circles, often traveling to France, Spain, and England in the late sixteenth century. For nearly two hundred years thereafter the commedia dell'arte in various permutations was a vital theatrical force throughout Europe. Its presence in France from the 1570s on constituted a significant chapter in French theater history. Visits to the royal court in Paris were followed by the establishment of the Comédie-Italienne and, after its suppression in 1697, by a revival in 1716 by Luigi Riccoboni. The Italian companies influenced Molière (1622–1673) and eventually Marivaux (1688–1763), nurtured Page 10  |  Top of Article French versions of stock roles like Mezzetin, Scaramouche, or Scapin and Gallic additions, from Turlupin and Captain Fracasse to Pierrot and Pierrette, as well as leaving a memory in Watteau's painting.

Long sojourns in Madrid not only influenced Lope de Vega (1562–1635), but also made the commedia dell'arte a primary transmitter of Spanish drama to Italy through adaptations and translations of Calderón and other Golden Age dramatists. The connection with England has been harder to document, but scrutiny of Shakespeare's theatrical practice and associations reveals his savvy awareness of Italian theater technology in general and of the professional players in particular.

In the mid-seventeenth century, the first two creative generations of the commedia dell'arte—represented by Francesco, Isabella, and G. B. Andreini, P. M. Cecchini, and Niccolo Barbieri—were replaced by a less versatile, bureaucratized profession. The troupes, which employed an increasingly fixed repertoire of masks and farcical plots, became dependent on the market economy of theater-owners and impresarios. The popularity of the commedia dell'arte continued to grow, however, and its characters and style prospered everywhere, with especial brilliance in Naples and Venice, and were imitated by cultivated amateurs in private the-atricals.

In the course of the eighteenth century, the commedia dell'arte was widely perceived to have hardened into cliches and, despite the imaginative continuation of Carlo Gozzi, it declined as Carlo Goldoni's reforms moved the Italian theater toward realism.

By the nineteenth century the commedia dell'arte had become a vestigial element in opera and a subject for romanticizing scholarship.

Lea, Kathleen M. Italian Popular Comedy: A Study in the Commedia dell'Arte 1560–1620, with Special Reference to the English Stage. Oxford, 1934.