Psychological theories have traditionally emphasized learning from direct experience. If knowledge and skills could be acquired only by trial and error, human development would be greatly retarded, not to mention exceedingly tedious and hazardous. Moreover, limited time, resources, and mobility impose severe limits on the places and activities that people can directly explore to gain new knowledge and competencies. Nevertheless, humans have evolved an advanced cognitive capacity for observational learning that enables them to abbreviate knowledge acquisition by learning from the examples provided by others. Indeed, nearly all behavioral, cognitive and emotional learning that results from direct experience can be duplicated by observation of others' behavior.

A special power of social modeling is that it can transmit new ways of thinking and behaving to countless people in widely dispersed locales through symbolic modes of communication. By drawing on this symbolic modeling, observers can transcend the bounds of their immediate environment. With the advent of enormous advances in the technology of communication, observational learning from the symbolic environment is playing an increasingly powerful role in people's everyday lives.

Observational learning is governed by four sub-functions that are summarized in Figure 1. Attentional processes determine what people selectively observe in the profusion of modeling influences and what information they extract from modeled events. A number of factors influence what people choose to explore and how they perceive what is modeled in the social and symbolic environment, some pertaining to cognitive skills, preconceptions, and value preferences of the observers, and others to the conspicuousness, attractiveness, and functional value of the modeled activities themselves. Still other factors concern the structural arrangements of human interactions and social networks, which largely determine the types of models to which people have ready access.

People cannot be much influenced by observed events if they do not remember them. A second sub-function governing observational learning concerns centers on cognitive representational processes. Retention involves an active process of transforming and restructuring information about modeled events into rules and conceptions for generating new patterns of behavior. Preconceptions and emotional states can bias how observed information is transformed into memory codes. Similarly, recall involves reconstruction of past experiences rather than simple retrieval of registered past events.

In the third subfunction in observational learning—the production process—symbolic conceptions are transformed into appropriate courses of action. Conceptions are rarely translated into proficient action from the outset. Skills are usually perfected through a conception-matching process. Conceptions guide the construction and execution of behavior patterns. The behavior is modified as necessary to achieve close correspondence between conception and action. The richer the repertoire of subskills that people possess, the easier it is to integrate them to produce the new forms of behavior.

The fourth subfunction in observational learning concerns motivational processes. People do not perform everything they learn. Performance of observationally learned behavior is influenced by three major types of incentive motivators: direct, vicarious, and self-produced. People are more likely to perform observationally learned behavior if it is rewarding rather than punishing. The observed costs and benefits experienced by others influence the performance of modeled patterns as much as directly experienced consequences do. People are motivated by the successes of others who are similar to them but are discouraged their failures. Personal standards of conduct provide a further source of incentive motivation. People pursue activities that they find satisfying and that confer a sense of self-worth; they reject those of which they personally disapprove.

Observational learning is not merely a process of behavioral mimicry. Highly functional patterns of behavior, which constitute the proven skills and established Page 483  |  Top of Article 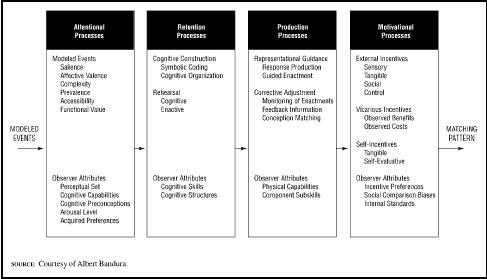 Figure 1 customs of a culture, may be adopted in essentially the same form as they are exemplified. There is little leeway for improvisation on how to drive automobiles or solve arithmetic problems. However, in many activities, subskills require improvisation in the mastery of varied challenges. Modeling influences can convey rules for generative and innovative behavior as well. For example, an individual may see others confront moral conflicts involving different matters but apply the same moral standard to them. In abstract observational learning, observers extract the rules or standards embodied in the specific judgments or actions exhibited by others. Once they learn a rule, they can use it to generate new instances of behavior that go beyond what they have seen or heard. Thus, on the basis of modeled information, people acquire standards for categorizing and judging events, linguistic rules of communication, thinking skills on how to gain and use knowledge, and personal standards for regulating motivation and conduct. Evidence that generative rules of thought and behavior can be created through abstract modeling attests to the broad scope of observational learning.

So far the discussion has centered on the acquisition of knowledge, cognitive skills, and new styles of behavior through observational learning. In addition to creating new competencies, modeling influences have strong motivational effects. Seeing others gain desired outcomes by their actions can foster the incentives of positive expectations; observed adversities can serve as the disincentives of positive expectations. The motivational impact of modeled transactions depends on observers' outcome expectations, judgments of their ability to perform the modeled behavior, their perceptions of the likely success or failure of the modeled actions, and their expectation of similar results if they undertook comparable activities.

People are easily aroused by the emotional expressions of others. Therefore, observers can acquire lasting attitudes, values, and emotional dispositions toward persons, places, or things that they associate with modeled emotional experiences. They learn to fear the things that frightened others, to dislike what repulsed them, and to like what gratified them. Fears and intractable phobias can be weakened or eliminated by modeling coping strategies for exercising control over the things that are feared. Values can similarly be developed and altered vicariously by repeated exposure to the likes and dislikes of others.

During their daily lives, people have direct contact with only a small sector of the physical and social environment. They inhabit a limited locale, work in Page 484  |  Top of Article the same setting, travel the same routes, visit the same places, perform the same routines day in and day out, and interact with the same circle of friends and associates. Consequently, their conceptions of social reality with which they have little or no contact are greatly influenced by vicarious experiences—by what they see and hear—in the absence of direct experiential correctives. The more people's conceptions of reality depend upon the media's symbolic environment, the greater is its social impact. Many of the shared misconceptions about occupational pursuits, ethnic groups, minorities, the elderly, social and gender roles, and other aspects of life are at least partly engendered through symbolic modeling of stereotypes.

Much of the preceding discussion has concerned observational learning at the individual level. Video systems feeding off telecommunications satellites have become the dominant vehicle for disseminating symbolic environments to vast populations. Social practices are being widely diffused within societies, and ideas, values, and styles of conduct are being modeled worldwide. Observational learning is thus coming to play an increasingly influential role in sociopolitical and transcultural change. In this broader function of social diffusion, modeling through the mass media instructs people in new ideas and social practices. Positive and negative incentives determine which of the modeled innovations will be adopted. People are linked together by networks of social relationships. Social networks provide diffusion paths for the spread of new ideas and behavior.

—— (2002). Environmental sustainability through sociocognitive approaches to deceleration of population growth. In P. Schmuch and W. Schultz, eds., The psychology of sustainable development. Dordrecht, the Netherlands: Kluwer.