Caroline Herschel was the first woman to gain wide recognition in astronomy. She assisted her brother William Herschel (1738-1822), regarded as the founder of modern quantitative astronomy, in his work, and discovered three nebulae, eight comets, and compiled several extensive collections of star and nebula positions.

One of six children, Caroline was born in Hanover; her father was an oboist, and later the bandmaster, of the Hanoverian Foot Guards Band. Her four brothers were trained as musicians, but, although her father managed to provide her with some education, her mother strongly opposed any formal education for her daughters. For much of her early life, she was principally engaged in housework and was basically a servant.

When the French occupied Hanover in 1757, her brother William emigrated to England. Her father died in 1767, and she served as her mother's housekeeper until, against strong objections from her mother, she joined William in England in 1772. William had done well with his music and had become an orchestra director and the organist at the chapel in Bath. Caroline managed their home and William taught her English and gave her voice lessons. She became an accomplished and successful singer.

William had become interested in astronomy and spent his evenings engaged in his hobby of building telescopes and observing the heavens. Caroline assisted him, learning the mathematics necessary to record observations and to make the necessary calculations. She even fed William when his hands were occupied for long periods in the construction of mirrors for his telescopes. 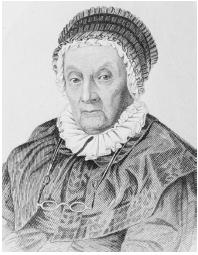 Caroline Herschel. (The Library of Congress. Reproduced by permission.)

In 1781 William discovered the planet Uranus, an accomplishment that brought him recognition and a position as court astronomer for King George III. He and Caroline gave up their musical careers and devoted all of their time and energy to astronomy. She continued to perform most of the calculations on the data that resulted from his work, but also began to make her own systematic observations of the sky. Using a telescope that William had given her, Caroline discovered three new nebulae in 1783. In 1786 she submitted to the Royal Society a manuscript entitled Index to Flamsteed's Observations of the Fixed Stars. This volume was the result of her meticulous work checking and correcting the catalog of stars that had been published by the first Astronomer Royal, John Flamsteed (1646-1719). She also included 560 additional stars that Flamsteed had omitted. This, together with the discovery of her first comet that same year, brought her recognition as an astronomer in her own right, and she was given her own salary by King George III as William's assistant in 1787.

William eventually married in 1788. Though he and Caroline no longer lived in the same house thenceforth, Caroline continued to perform the mathematical calculations that he needed. She also discovered eight comets by 1797. After 1797, however, she produced no more work of her own until after William's death. During this period she helped educate William's son, John Herschel (1792-1871), who later made a name for himself in mathematics and astronomy.

Soon after William died in 1822, Caroline returned to Hanover where she completed a catalog of 2500 nebulae in 1828. She was widely respected by scientists throughout Europe, and many of them visited her in Hanover. She received the Gold Medal of the Royal Astronomical Society in 1828, and in 1835 she was one of the first two women elected to honorary membership in the Royal Society. She was elected a member of the Irish Academy in 1838 and was awarded the Large Gold Medal for Science by the King of Prussia in 1846. She died in 1848, shortly before her 98th birthday. In 1889 a minor planet was named Lucretia, Caroline's middle name, in her honor.