The brand recognition of Starbucks coffee, and its elevation to a catchword denoting the ultimate corporate commodification of the anti-corporate, "slacker" lifestyle, is all the more phenomenal for the company's marked refusal to achieve that status through the medium of advertising. A chain of retail coffee outlets that offer fresh specialty drinks and beans to go, the Seattle-based company expanded across North America at a quick pace during the 1990s, and by early 1998 Starbucks stores could boast a combined foot-traffic count of five million visitors weekly. Because of Starbucks, Americans can now pronounce the foreign terms "latte" and "barista" when discussing complex coffee beverages and the food-service professionals who make them.

Starbucks' corporate origins date back to 1971, but the company did not really begin its march to massive success until 1986, when a Starbucks executive, Howard Schultz, created a coffeehouse in Seattle to serve upscale espresso drinks. He called it Il Giornale, and modeled it on the coffee-imbibing locales ubiquitous to Italian cities. The following year, Schultz put financing together and bought out Starbucks' two original founders, who had little faith in his attempt to introduce European-style coffee and coffee culture.

Starbucks was a hit in Seattle, however, and soon began expanding down the Pacific Coast. Exporting the concept to Chicago in the early 1990s was equally successful, and forays into the Northeast and Canada were also lucrative. The trade journal Restaurants & Institutions, naming Starbucks as its "Changemaker" for 1995, explained 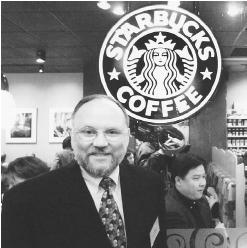 Starbucks president, Howard Behar, poses in front of the first Starbucks in China. that "with ethnic influences shaping the American palate, consumers demand more from everything they consume.… Along comes Starbucks with a flavor profile stronger than many Americans had ever experienced." With a featured "coffee of the day" and a variety of espresso, cappuccino, and latte drinks priced from $1.15 to $3.15, Starbucks became a morning stop for urban commuters in major American cities, and a hangout for the home-office-bound and stroller-mom brigade of the more affluent suburbs. In some urban spots, Starbucks outlets were so successful that the company simply opened up a second Starbucks across the street.

By 1998, Starbucks was the number-one roaster and retailer of specialty coffee in the United States, closing in on its goal of 2,000 stores by the year 2000, expanding into Asian markets, and introducing bottled beverages and packaged beans in supermarkets. Yet it was the actual Starbucks space that attracted both devotees and disparagers. The stores are carefully designed to look just slightly cutting-edge and modern in their fixtures and fabrics; the lighting is subdued and ambient. Sociologists term it a "third place"—neither work nor home, but a neighborhood spot where it's okay to sit alone, offering the chance of running into old friends or making new ones. "I don't think Starbucks' success has that much to do with coffee," urban sociologist Peter Katz told Seattle Weekly's Bruce Barcott. "Starbucks is selling community."

Katz and other academics have contemplated Starbucks' success and increasing ubiquity, and cite certain elements in North American culture and demographics as key factors. First is the importance of the "private sphere" in American life, and because of it a near-planned lack of designed community spaces, as in Europe. The predominance of suburban living spaces has led, in turn, to too much isolation. Economic considerations have also contributed to Starbucks' empire: By the 1990s, the workplace no longer offered the security and stabilized socialization of the past and more Americans had opted to work at home. Coupled with the extreme transientness of North America culture in general, these factors engendered this longing for just such a "third place."

Furthermore, coffeehouse culture allows, to a certain extent, people from different social and belief strata to mix, and fulfills a post-Yuppie era desire to appear sophisticated and European. It also allows more straitlaced personality types to participate in what had been the coffeehouse culture pre-Starbucks, when such places were frequented by artists, college students, and the underemployed. "Square America needs a hangout too," observed the Seattle Weekly's Barcott. "Starbucks joins the concept of the coffeehouse with mainstream America's demand for brand-name assurance." Locating the stores near or even inside mega-bookstores such as Barnes & Noble or Borders creates what Barcott calls the "upscale leisure ghetto."

Yet anti-Starbucks sentiment is strong, especially among the original slacker coffeehouse crowd. Stores under construction are sometimes vandalized, there are Internet web sites that rail against "McLatte," and National Public Radio host Ira Glass speaks of the common bond uniting his audience as "a fear of Starbucks."