Musicians in the Middle East have, over the centuries, produced a great classical tradition in a variety of regional forms.

Historically, Middle Eastern music has been predominantly melodic, drawing from a complicated system of modes called maqam in Arabic, makam in Turkish, and mugam in Azerbaijani. The melodic system of Iran is based on dastgaha, similar in principle if not in practice. These systems and their repertoires frequently have written histories—music theories that date back to the time of al-Farabi and earlier.

Sung poetry is fundamental to the musical art of the region. The elegant or clever text and the performance that highlights the affective phrase or the play on words often are highly valued by listeners.

Overarching genres of performance occur throughout the region, often consisting of suites of instrumental and vocal music, both improvised and formally composed. They occur in devotional rituals, dance, neoclassical performance, and performances by folk musicians. Despite the disparate sounds, contexts, and audiences, these performances are often linked by listeners with their Arabic musical-poetic heritage (turath), which encompasses a broad range of religious, classical, and folk musics. Typologies common in the West that separate the religious and the secular, or the classical, the folk, and the popular, do not always apply to Middle Eastern repertoires. For instance, in Iran the classical radif stands in stark contrast to Kurdish folk songs but is colored by Iranian Sufi performance. By contrast, the Azerbaijani mugam, a classical genre, includes and arguably depends on Azeri folk music in its structure.

Over the years these historic materials and aesthetics have yielded distinct styles, genres, and practices in different times and places. For example, the governments of Morocco and Tunisia and private agencies in Algeria have participated in the revitalization of local forms of nawba, a suite-like genre. It is believed to have originated in Andalusia and to have been carried from there to North Africa. What results, in the twentieth century, is "classical" music so emblematic of a particular region that it is really not possible to speak of "Algerian" classical music, let alone "Arab" classical music but rather the repertories of Tlemcen, Constantine, Algiers, Fez, Tunis, and so on. However in general, revitalization of these genes serves to mark cultures as "Arab" rather than Berber.

On the other hand, styles drawn from the peoples of southern Morocco, Algeria, Tunisia, and Libya have created distinctly North African popular genres exemplified by the Moroccan group Nas alGhiwan. Similiarly, Algerian raʾi offers an excellent example of a style rooted in local musical practice, transformed with imported electronic instruments and modern texts. These styles draw the historic aesthetic of the clever, sometimes stinging colloquial text and favorite local instruments into contact with the electronics, and sometimes the staging, of rock music. The result may or may not be considered "westernized" by local listeners.

Regional distinctions have long been part of mashriq performances. Microtonal intervals tend to be tuned slightly higher in Turkey and Syria than in Egypt and North Africa. The buzuq is an important part of Lebanese folk culture. The resurgence of "classical" repertoires has been discouraged in Turkey since the establishment of the republic (1923). The governments of Egypt, Iraq, and Lebanon have sponsored neoclassical ensembles that often give concerts in opera houses, with musicians in evening dress performing without the extemporization that is historically part of Middle Eastern traditions. In other words, Arab pieces of music are presented in the context of a Western concert.

Transformed classical and folk traditions have emerged in nongovernmental venues as well. Perhaps the best known are the plays by Fayruz and the Rahbani brothers, articulating local pride and local concerns by using distinctly Lebanese styles and a combination of local and Western instruments. The Western models of the musical play and film,Page 1618  |  Top of Article 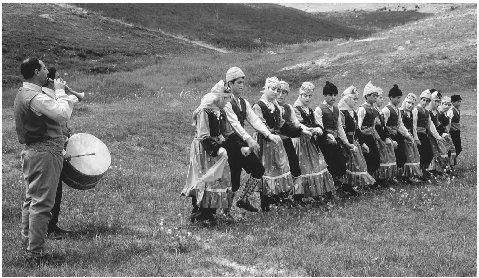 Kurdish folk dancers and musicians, eastern Turkey, ca. 1990–1996. © CHRIS HELLIER/CORBIS. REPRODUCED BY PERMISSION.
popular in the Arab world, serve local purposes well. The best-known recent exponent of music from the turath is the Syrian Sabah Fakhri, who travels internationally, performing muwashshahat, taqasim, classical instrumental pieces, and newer songs in suite-like arrangements. Umm Kulthum and Muhammad ibn Abd al-Wahhab are well-known performers of "new" or "popular" music that has attracted a large audience throughout the Arab world. Abd al-Wahhab's style is the more innovative, creating a pastiche of Western and Arab musical styles in a single composition and establishing the free-form instrumental piece (al-qitʿa al-musiqiyya) as an important independent genre. Although both Umm Kulthum and Abd al-Wahhab sing complicated neoclassical works, Umm Kulthum has claimed this area as her own.


Instrumental improvisations (taqasim) and a historic suite-like genre, the Iraqi maqam, have persisted throughout the twentieth century, partly supported by the Arab diaspora. The performances of Munir Bashir, Nazim al-Ghazali, and Muhammad alQubbanji have been rereleased by firms in Paris and Baghdad. Iraq and the countries of the Arabian peninsula support rich traditions of singing and dancing that have been documented by local musicologists and by folklore institutes such as that established in Oman.

Teaching and performing classical Persian music have formed part of musical life in Tehran throughout the twentieth century, especially among elites. The musical culture of Iran encompasses a range of folk and religious musics as well. Cabaret music also has become popular. Following the Iranian Revolution, the new government moved to suppress musical performance, including music at weddings. In the long run, the primary target was cabaret music, often associated with consumption of alcohol and prostitution. In recent years, radif recordings have become readily available, and performance of traditional music persists.


Israel presents a unique musical culture, consisting of a patchwork of musics from Europe, the former Soviet Union, the Arab world, and Africa, brought together in a small space over a relatively short period of time. A few syncretic repertoires have emerged, but musics more often persist as individual emblems of the immigrant communities.

Weddings and special occasions, often religious in nature, have long offered venues for musical performance. Starting the pilgrimage to Mecca, celebrating the birthday of Muhammad, remembering the martyrdom of Husayn, and the ceremonies of Sufi dhikrs have all involved music. During the nineteenth and twentieth centuries, urban nightclubs and cabarets often featured musical entertainment and dancing, as did tourist hotels. Generally speaking, there is a long history of professionalism in Middle Eastern music. In some areas, notably Iran, professional musicians tend to belong to minority groups; musical performance in the majority culture tends to be amateur.

These tendencies have persisted in the twentieth century. Often they have been transformed through the mass media, which quickly took hold throughout the Middle East and became very popular. Many would argue that the mass media have become primary patrons of musicians.

Commercial recording took hold in the first decade of the twentieth century, mainly in Algiers, Cairo, Beirut, Constantinople (now Istanbul), and Tehran. Radio became more popular than the phonograph in the 1930s. Television, beginning in the 1960s, and videocassettes in the 1970s, proliferated, especially among the middle and upper classes. This development is significant particularly because cassettes, which are inexpensive and portable, gave control over production to local artists, or at least to agencies that were closer to the artists than a national radio company or a European-based recording company. Artists were able to produce their own recordings and market them locally, circumventing those who select music for radio and television stations and the requirements of international production firms. In the 1990s, despite the opportunities for Middle Eastern artists to produce internationally marketed videos and compact disks, some of the most interesting performances are locally released cassettes.

As a constituent of social life, musical performances in the Middle East have engaged local histories with the flow of new materials from other societies. Unsurprisingly, this engagement has fed debates on 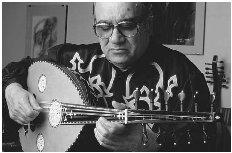 Munir Bashir (1930–1997). Iraq's best-known musician, Bashir was famous for his mastery of the oud, a musical instrument of the lute family. © SHEPARD SHERBELL/CORBIS. REPRODUCED BY PERMISSION. authenticity, music and sociocultural identity, modernity, and the proper nature of culture in the late twentieth century.


The development of mass media centered in urban areas has tended to promote the musics of those areas over others. Local musics from Morocco to Iraq have been dominated in the mass media by musics produced in Cairo and Beirut, for instance. Only in recent years, with the less expensive cassette and a recent interest in the musics of southern Morocco, Nubia, and the Gulf states, has this situation changed.


Contact with Europe and the United States has led some musicians to borrow, adapt, and integrate new sounds into local music. The accordion, cello, string bass, and electronic instruments have become widely popular and virtually consolidated with some local musics. Latin rhythms, disco, and nineteenth-century orchestral music (especially for film scores) have been borrowed outright. This vast array of sounds—ranging from religious chanting by a solo voice to improvisations on lutes, dueling songs, formally composed orchestral pieces, and special electronic effects—is being employed by musicians and their listeners to identify themselves and to suggest directions and affinities within their societies.

Boundaries are not always clear. The process of musical creation transforms past practices to contribute to the lively culture of Middle Eastern societiesPage 1620  |  Top of Article intent on maintaining an identity while responding to the challenges of the present.