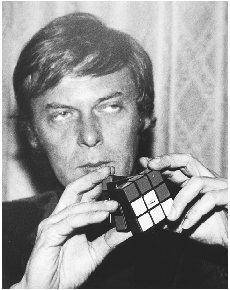 
The multicolored puzzle known as Rubik's Cube became a worldwide sensation in the 1980s, inspiring clubs, books, newsletters, and even a Saturday morning cartoon (see entry under 1960s—TV and Radio in volume 4).

Hungarian architecture professor Erno Rubik (1944–) came up with the idea for the cube in the early 1970s as a teaching tool for his students. Always interested in geometry, Rubik devised a six-sided puzzle with fifty-four colored squares. The object of the puzzle was to get each side to line up entirely as one solid color. It sounded simple, but users quickly discovered how difficult it was. Mathematicians have calculated that there are 43,252,003,274,489,856,000 possible combinations to Rubik's Cube, but only one correct solution. The deceptive simplicity of the puzzle proved to be a large part of its appeal.

Rubik's Cube developed a cult following in Europe in the late 1970s. College students and schoolchildren were especially attracted to the device, which won prizes for outstanding invention. Rubik's idea really took off when the Ideal Toy Company began marketing Rubik's Cube in the United States and around the world. Between 1980 and 1982, an estimated one hundred million Rubik's Cubes were sold worldwide. It is difficult to say just how many were sold because of the number of imitation cubes that hit toy shelves around the same time. Some sixty books were published offering strategies and shortcuts for solving the puzzle. Clubs were formed around the globe so that cube enthusiasts could share their tricks and techniques. By 1982, Rubik's Cube had become such a household term that it became part of the Oxford English Dictionary.

Rubik's Cube fever peaked around that time, although a Saturday morning cartoon series, Rubik the Amazing Cube, ranPage 1170  |  Top of Article until 1985. The show, which featured a flying, talking Cube, had little to do with the puzzle. Today, Rubik's Cube still has its devoted enthusiasts, while its creator Erno Rubik has gone on to create other puzzles and games that combine mathematics and entertainment.