As the Western world celebrated the end of World War I (1914–18) clothing styles changed to reflect the enthusiasm of the time. The most striking differences came in the silhouettes, or shapes, of men's and women's outfits. In general, women's clothes went from flaring skirts to a tubular line, featuring flat chests and low waists, and men's clothes became much fuller, even baggy.

The changes in women's clothes came from new attitudes about life and work. During this decade women won the right to 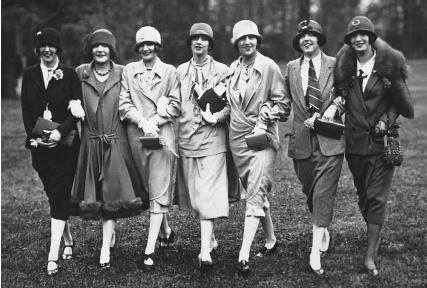 Narrower skirts to the knee and jackets with low waistlines gave women a new, tubular silhouette. Reproduced by permission of © Hulton-Deutsch Collection/CORBIS. Page 726  |  Top of Article vote and many earned their own money. Women needed stylish clothes that they could wear to work or out during the day. For everyday wear women wore a tailored suit. For more festive occasions women wore clothes that were more comfortable and luxurious than before the war. The tight corsets that squeezed women into unnatural shapes were replaced with loose-fitting outfits and, eventually, by figure skimming gowns with revealing necklines and open backs.

With the end of rationing, or the sparing use of materials, clothes became elaborate. The most expensive were made of satin, silk, and brocade, a fabric with raised designs and adorned with ruffles, fringe, gathers, bows, jewels, and even fur. Women added fringed or transparent shawls to these outfits for even more decoration. Inspiration for women's clothing came from designers' ideas about the future. Designers created clothes that were very different from older styles. The most drastic change was the knee-length hemline. For the first time, women showed their legs in public, swinging them wildly to the new exuberant dances like the Charleston. Clothes also reflected the new art styles of the period. Bold geometric patterns and new designs were beaded, embroidered, and even painted on garments. The Orient and other cultures also inspired clothing styles, as seen with pajamas, the kimono sleeves of some dresses, and the turbans, or headwraps, complementing some outfits. The trendsetters for women were mostly fashion designers centered in Paris, France, including Gabrielle "Coco" Chanel (1883–1971), Madeline Vionnet (c. 1876–c. 1973), Paul Poiret (1879–1944), and Jean Patou (1880–1936). Although only the wealthiest women could wear original designer fashions, middle-class women could buy copies of French designs in retail stores, and other women could buy patterns and yards of fabric to make their own.

For men, the decade offered similar style changes. Clothing became much looser. Men continued to wear the sack suit that became the most common style at the turn of the century, but the lines of the suit became more smooth, with wider trousers belted high on the waist and broad-shouldered jackets. The widest men's pants were called Oxford Bags. The shirts men wore with their suits had attached collars by mid-decade and came in white and pastel shades of blue, tan, and yellow. Men's ties were no longer plain; they now featured stripes, polka dots, and plaids. Men no longer Page 728  |  Top of Article had to wear heavy fabrics in the heat of the summer. Gabardines (a twill fabric), flannels, and tweeds were replaced with light seersucker, a striped, lightly puckered linen or cotton. Seersucker was sewn into sack suits or made into a suit with a belted jacket to wear in hot weather. Men's fashions followed such trendsetters as Edward VIII (1894–1972), the Prince of Wales; pilot Charles Lindbergh (1902–1974); tennis players Jean René Lacoste (1904–1996) and Bill Tilden (1893–1953); swimmer Johnny Weissmuller (1904–1984); college football star Red Grange (1903–1991); movie star Rudolph Valentino (1895–1926); and countless college students on campuses throughout the United States and Europe.

In addition to the changes in the styles of everyday and formal wear, new styles emerged. Sportswear for men and women provided outfits for tennis, golf, swimming, boating, and other sports. Sports became so popular that styles for watching sports also became fashionable. Heavy raccoon coats were seen in the stands at college football games; derby hats topped men's heads at horse races and around town; and spectator shoes, a style of multicolored shoe, adorned the feet of people watching sporting events. The navy blue blazer also became associated with yachting clubs, among other things.