Artists have long been inspired to capture the heroism, tragedy, ideals, suffering, and destruction of war. Whether through painting and sculpture, or television and film, their images have a lasting impact on how people understand and remember war. The images of 19th-century artists who portrayed the Civil War and Indian Wars helped to create an American memory of those wars. Their art helped to shape American culture and identity.

Several prominent artists, including Edmonia Lewis and Winslow Homer, created paintings and sculptures that depicted the ideologies and realities that underpinned the Civil War. Violent conflicts in the West between Native American peoples, who desperately attempted to maintain their cultural integrity, and American settlers resulted from the nation's belief that its "manifest destiny" was to dominate the continent. Prominent artists who have depicted this cultural conflict include Oscar Howe, Frederic Remington, and Charles Russell.

THE CIVIL WAR IN ART

In 1867, two years after the Civil War ended, the sculptor Edmonia Lewis (ca. 1845–after 1909) created the sculpture, Forever Free. Lewis—part African American, part Native American—was particularly interested in the identity and oppression of African American people. Forever Free depicts an African American man, with a fragment of a recently-broken chain still shackled to his wrist, standing beside a kneeling African American woman. Although the American art establishment was male-dominated during the 19th century, Lewis represents an exception to the norm, as do other women who contributed to the visual culture of the Civil War era. For example, women were involved in the visual culture of the Civil War by sewing quilts used by soldiers.

Besides the highly refined sculpted imagery of Lewis, the Civil War was shown to American society through engravings published in newspapers. Artists traveled to battle sites and encampments to draw and paint the scenes first hand; subsequently, engravings were made from these originals. One of the most successful artists who depicted the Civil War for the Union was Winslow Homer (1836–1910). His depictions of the Civil War show the conflict in frank detail, and many of his renderings were published in the popular magazine Harper's Bazaar. The pictures show mundane scenes, as well as images of violence. Homer's engravings and paintings of the Civil War are often judged to be highly realistic and lacking sentimental qualities. However, his work certainly contains emotion; he was, in fact, consciously manipulating his subject matter for both emotional and didactic reasons. After the war ended, Homer created paintings that drew on his firsthand knowledge of the war. One painting, Prisoners from the Front, received international acclaim in 1866. In addition to Winslow Homer, several other artists depicted the Civil War in art, including Julian Scott and Thomas Nast (1840–1902), who painted scenes for the Union, and Conrad Wise Chapman (1842–1910), who painted scenes for the Confederacy.

Civil War imagery has remained important to the American public since the war ended. Numerous monuments 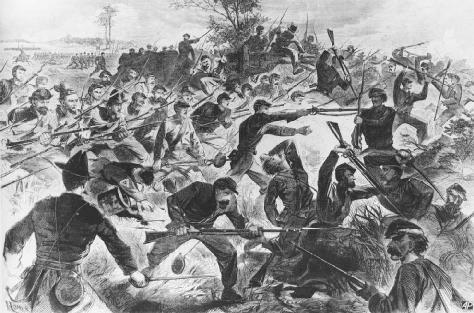 "The War for the Union—A Bayonet Charge," a lithograph by Winslow Homer, published in Harpers Weekly, July 12, 1862. AP/WIDE WORLD PHOTOS

were erected throughout the United States during the late 19th Century, attesting to America's need to commemorate the collective traumas of that war and celebrate the subsequent healing of the nation. One of the most important of these monuments is the Augustus St. Gaudens' relief sculpture depicting the Massachusetts 54th regiment of Black soldiers, led by Robert Gould Shaw, the son of a prominent Boston family, marching toward its destruction in the 1863 battle of Fort Wagner in South Carolina. St. Gaudens' monument captures the war's idealism, as blacks and whites fight for their freedom, as well as America's racial division, represented by black soldiers led by a white officer.

THE WEST IN ART

It is difficult to generalize about the imagery of violence between Native American peoples and the U.S. Government in the American West because uprisings occurred sporadically in many regions over an extended period of time. Although there was no clear beginning and no clear end to these conflicts, one event is often cited as a symbolic end of armed conflict between Native Americans and the U.S. Government: the Massacre at Wounded Knee on December 29, 1890. The Massacre consisted of the killing of nearly 300 Lakota people by the U.S. Army. One artist who depicted this event is the Native American modernist Oscar Howe (1915–1983). Titled Wounded Knee Massacre, his painting shows a line of U.S. soldiers shooting at Lakota, whose bloodied bodies fall into an area that Howe evokes as an open grave.

Such violent conflicts between Lakota people and U.S. soldiers were easily recognized by the American people. Indeed, the Lakota warrior, with a full headdress of feathers, became the quintessential image of a Native American. One reason for this was the dramatic reinterpretation and display of the history as a clear narrative of conquest. Within this narrative, Native Americans were depicted as savage, and artists depicted U.S. soldiers as bringing civilization to them. During the 1860s and 1870s, huge paintings were created to illustrate this narrative. One painting by John Stevens consisted of a series of 36 individual images on a single canvas that was 222 feet long. The painting was viewed through a performance, in which the canvas was rolled across a specially constructed apparatus, lit from behind. As the scenes rolled past the audience, the artist narrated the events.

The best known artist of the West is Frederick Remington (1861–1909). Though Remington created both paintings and sculpture, his wide recognition is due to his mass-produced bronze sculptures. These bronzes depict images of a highly romanticized Western lifestyle. In Remington's art as a whole, the West appears as a region with continuous emotional activities, such as cowboys riding bucking broncos and Native Americans hunting bison. Many of Remington's paintings depict violent conflict between U.S. soldiers and Native Americans, clearly drawing on the narrative of conquest. Similar to Remington, the artist Charles M. Russell (1864–1926) also depicted scenes of the American West, showing conquest and stereotyped images of both Native Americans and cowboys. The West of Remington and Russell was a region almost devoid of women—both artists ignored women in nearly all of their art.

These images depicting the West have resounded in American culture in multiple ways. An organization founded in the 20th century, The Cowboy Artists of America, includes artists who imitate the style that Remington and other artists developed. Hollywood transformed this imagery into popular Western movies, and corporate America appropriates these images to sell products ranging from clothing to automobiles to cigarettes.