The Black Panther Party (BPP), originally established as the Black Panther Party for Self-Defense in October 1966, arose during the so-called Black Power era. But the Panthers were not a Black Power group as such. In fact they were, almost from the beginning, at odds with nearly all Black Power organizations, primarily because Panther leaders Huey Newton, Bobby Seale, and Eldridge Cleaver gave priority to class over race in their political analysis and were early advocates of working with white radicals. On the crucial question of opposition to the escalating war in Vietnam, the Panthers and key sectors of the Students for a Democratic Society, the main organization of white leftists in the late 1960s, developed in symbiosis a revolutionary, anti-imperialist position on what became the most pressing issue of the day.

Black Power groups like the Student Nonviolent Coordinating Committee (SNCC) also opposed the war, but before those groups became identified with the Black Power movement. SNCC leaders, in rhetoric and deed, dissented from U.S. Vietnam policy by late 1964, and the organization officially condemned the war in early 1966. Their reasons mirrored those of dissenting African Americans generally as the conflict escalated from the middle of the decade on. The Black Power view held, first, that Vietnam policy smacked of hypocrisy: claiming to fight for freedom in South Vietnam while leaving blacks unprotected at home, at the same time draining needed domestic resources. Second, black people seemed to bear the brunt of the fighting: they were disproportionately drafted by white-dominated draft boards, disproportionately killed in action, and disproportionately disciplined by white officers. Third, the war itself came to be seen as racist: as Kwame Ture put it in 1967, "white people [were] sending black people to make war on yellow people in order to defend the land they stole from red people." 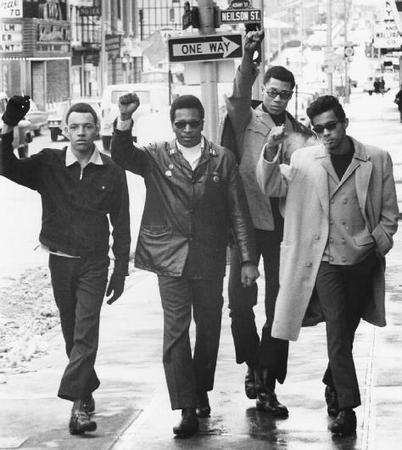 This last point tapped deep currents in African-American protest thought, particularly in the early post-World War II years of African decolonization. The BPP frequently stressed an anti-imperialist argument for racial solidarity of colored peoples fighting for self-determination. But the Panthers went much farther. Explicitly identifying the success of the antiwar movement as a prelude to "revolution," in 1969 Panther founder Huey Newton argued that not only black people in the United States and the Vietnamese in Asia but the AmericanPage 18  |  Top of Article people generally had been "colonized"; thus, all had to join together to destroy their common enemy, the American "empire." Recognizing that black people were conspicuous by their absence in the antiwar movement of the late sixties—and after several years of ghetto rioting, campus occupations, violent street actions, and open defiance of the draft—Newton advocated that the Panthers "actually get out and support [the peace movement] in various ways including literature and demonstrations." The logic of that position became crystal clear a year later, when he offered the forces fighting American troops in Vietnam, "in the spirit of international revolutionary solidarity…an undetermined number of troops to assist you in your fight against American imperialism," because "your struggle is our struggle." For the Panthers, in the parlance of the day, the "war at home" and the war in Vietnam were one and the same.

The turbulent 1960s were made more so by the mixture of forces that did not always follow preconceived paths. The movements for Black Power included groups fighting for civil rights and also against the exploitation of blacks. The Black Panthers, inspired by Malcolm X, in addition to espousing power for blacks and black pride, aligned with national and international groups seeking to replace capitalism with a brand of Maoist/Marxist socialism. Although different in origins and goals, the socialists and the Panthers found common ground in opposing the war in Vietnam, which they used to symbolize injustices in American society as a whole. Ironically, even as that war divided American society it was a catalyst for uniting these movements to promote radical change in American domestic and foreign policy. The war legitimized and energized these groups as part of the cultural upheaval against what was then called "the Establishment."

By the early 1970s, violence and internal division ripped apart the Black Panther party. With the end of the draft and the Vietnam War, and implementation of the 1965 civil rights act, opening political power to blacks in the South, the movement for Black Power slowly dissolved.