Unlike American bars and taverns, the cafés or "coffee houses" of America have not yet found their historian. Best defined as public spaces where coffee is the prominent—but not necessarily the only—drink served, the American prototype tends to take a more leisurely attitude toward socializing without the necessity for buying a lot of food and drink. Across a wide variety of cultures and eras, moreover, these cafés tend to be places where upper classes, artists, and intellectuals congregate. The term "café society," associated since the 1960s with coffee house talk and sociability, originally referred to nightclubs and nightlife in New York City during the 1920s. Although coffee came to America as early as John Smith, and although the United States is the largest consumer in the world, the institution of the coffee house, has not, until more recently, been as central to American life as it is to European life.

American coffee consumption has an English origin. Seventeenth- and eighteenth-century England developed a flourishing coffee house culture. Indeed, coffee houses opened in England and cafés appeared in Paris or Vienna. By the early eighteenth century, Joseph Addison and Richard Steele were writing some of the first newspapers based on the "talk of the town" they heard in London cafés, and Lloyd's coffee house was the spatial catalyst that would produce the notable insurance company. English coffee houses remained a vital literary, commercial, and political institution until the early nineteenth century when, with changing mores, most coffee houses became transformed into middle-class clubs.

Coffee houses in the colonies emerged not long after they appeared in England. As in London, the greatest concentration occurred around stock exchanges and marketplaces. Indeed, Charleston, South Carolina; New York, New York; Boston, Massachusetts; Annapolis, Maryland; and Norfolk, Virginia, all had coffee houses connoting economic life "exchange." The London Coffee House in Philadelphia was the venue of much of the area's commercial life. New York City's Tontine Coffee House, built between 1792 and 1794, had on its first floor a primary "coffee room" that was the original site of the New York Stock Exchange. Coffee houses in America, as in England, generally became sites where business was conducted and mail was dropped off and picked up. David Shields talks about a "transatlantic network of coffee houses" for ships' captains. Indeed, these cafés often developed the same atmosphere as many English coffee houses, serving as "penny universities" where men from the artisanal classes and above could read newspapers and discuss current events with merchants and businessmen.

Perhaps spurred on also by such actions as the Boston Tea Party, national coffee consumption increased dramatically and by the 1830s had overtaken tea drinking. This rise in coffee consumption coincided significantly with the development of the temperance movement. One might even hypothesize that the temperance movement would have been far less successful without an alternative beverage, given the dubious health benefits of most water supplies. However the temperance movement, with only a few exceptions, did not accept the European-style café as an antidote to the saloon. Instead, for most of the nineteenth century, coffee drinking remained connected to domestic consumption, or was tied to restaurants or workplaces rather than having its own distinctive sites.

The only exceptions were immigrant groups, largely those of southern Europe, especially Italians, Slovenes, and Greeks. Some elegant restaurants in nineteenth-century Page 188  |  Top of Article 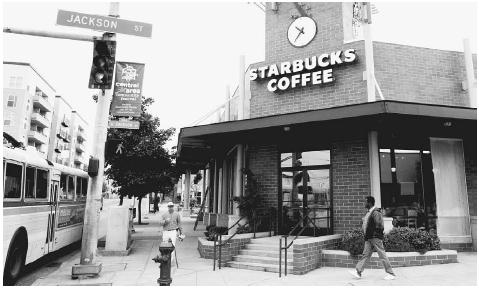 Starbucks boycott. Starbucks, which is perhaps the modern extension of early coffee houses in the United States. The popular Seattle-based company—shown here is one of its first Seattle stores—has spread across the United States and now offers customers more than 19,000 different combinations of its custom-made coffee blends and mix-ins. © AP/Wide World Photos New York City continued the genteel sociable tradition. The Waldorf-Astoria Hotel, for example, in its public corridors near the luxurious Palm Garden restaurant, maintained the Men's Café, "a place for stock brokers and men of affairs to pick up stock tips, deliver financial advice, drink, and keep their eye on business, all within view of one of the main social dining rooms in all of New York and the nation." (Erenberg, p. 35) But for the most part the immigrant establishments remained ethnic enclaves and did not attract working-class Americans or even the artist groups of the Greenwich Village neighborhood. Late nineteenth- and early twentieth-century bohemians around the country primarily frequented bars and saloons rather then coffee houses. Even in Prohibition years, speakeasies rather than cafés became the preferred haunt.

Coffee consumption did increase through the 1920s, and coffee houses and cafeterias did grow in numbers. One of the most famous owners, Alice Foot MacDougall, opened a series of shops in New York City. But the Prohibitionist hope—that coffee would become the accepted social drink and coffee houses would take the place of the saloon—did not materialize. What did emerge was the notion of café society, tied to the rise of such nightclubs as the Stork Club and linked more to European-style cabarets than to coffee houses. One of the most important of these establishments, actually called Cafe Society, strove consciously to break the color barrier. Under its spotlights Billie Holiday introduced what some consider the greatest song of the twentieth century, the antilynching protest "Strange Fruit."

Only after World War II did true European-style coffee houses emerge outside of immigrant enclaves. New York's Greenwich Village and San Francisco's North Beach, centers of the rising Beat generation, led the way. Important establishments included the Bitter End Cafe, Café Whoa?, the Cino, David's, Figaro's, the Riezi, the Bizarre, the Epitome, and the Caravan. The most popular places for Beat readings were the Gaslight, the Bizarre, and the Epitome. Nightclub owners pressed the police to shut down the cabaret owners or at least force them to get cabaret licenses. In the North Beach section of San Francisco, the Beat generation also had cafés: the Coffee Gallery, the Cellar, Vesuvio's, the Anxious Asp, the hungry i, Six Gallery, and the Black Cat Cafe. Here the Beat generation pioneered much of the literary, artistic, sexual, and interracial experimentation that would become even more prominent during the 1960s.

The 1960s produced a bevy of trends in coffee consumption. On the one hand, American coffee consumption peaked in 1962 and then began a steady decline that would not be arrested until the 1990s. On the other hand, immigrants and countercultural entrepreneurs would reverse a decline in coffee quality (due to a steady growth in instant and lower-quality blends) with the introduction of specialty coffees. In 1966, Alfred Peet, an immigrant of Dutch descent, opened his premium coffee shop in Berkeley, and, in 1971, three young college students—Jerry Baldwin, Gordon Bowker and Zev Siegal—opened up the first Starbucks in Seattle. The rich and diverse blends these entrepreneurs sold were a far cry from the homogenized, mass-production coffees such as Folgers or Maxwell House. At the same time, the cultural and political movements of the 1960s broadened the appeal of the café as a site of conversation, education, and organization like that first developed with the Beats. Student protest germinated in the cafés surrounding the University of California at Berkeley campus, for example. A G.I. coffee house movement emerged around military bases providing space "for hippies who couldn't avoid military service." The women's liberation movement also utilized cafés in New York and around college campuses.

By the late 1980s, as the computer and telecommunications revolution exploded, a hybrid between the café and the emerging Internet developed in Silicon Valley: the cyber café. These shops, wired by both caffeine and electronics, have proliferated around the world, but they have become increasingly rare in the United States as computer connectivity moves into the home.

During the 1980s and 1990s, America began to develop its first true nationwide coffee house culture. The small-scale, countercultural coffee houses of the 1960s and 1970s transformed into chains. The most important one, obviously, was Starbucks. Much as Ray Kroc, an immigrant's grandson, bought out the McDonald brothers and turned a small local chain into an international brand, so Howard Schultz, a product of New York's projects, did the same for Starbucks. In 1982, after working for a Swedish plastics company that sold thermoses to Starbucks, Schultz became the company's head of marketing. In the spring of 1983, as Schultz remembers, "it was like an epiphany" when he discovered the espresso bars of Milan. With a vision of re-creating this "barista" culture in the United States in 1987, he bought the company. By end of 2003, Starbucks had opened 4,200 coffee shops across the United States, with an additional 1,500 coffee houses in cities worldwide, including that cradle of café life, Paris.

The dawn of the twenty-first century sees ordinary Americans in unprecedented numbers drinking specialty coffee in public settings. Although Americans then consumed only 20 percent of the world's coffee (as opposed to 50 percent after World War II), the quality of the brew had improved. Coffeehouses became an integral part of liberal-middle and upper-middle-class culture, what David Brooks calls "Bobo," for bourgeois-bohemian. He also classifies as "latte towns" such cities as Burlington, Vermont; Madison, Wisconsin; Missoula, Montana; and Berkeley and San Francisco, California. The rise of the coffee house, often as a site of neighborhood and civic discussion and activity, Robert D. Putnam notes in his influential Bowling Alone, helped to offset the decline in the number of eating and drinking establishments in the United States and helped reinvigorate American civic culture. In an age of increasingly media-activated communication, cafés may become a privileged site of face-to-face interaction, which, in turn, is no longer banal, but an increasingly exotic form of human communication.

Erenberg, Lewis A. Steppin' Out: New York Nightlife and the Transformation of American Culture, 1890–1930. Chicago: University of Chicago Press, 1981.

Klinger-Vartabedian, Laurel, and Robert A. Vartabedian. "Media and Discourse in the Twentieth-Century Coffee-house Movement." Journal of Popular Culture 26 (Winter 1992): 211–218.

Pendergrast, Mark. Uncommon Grounds: The History of Coffee and How It Transformed Our World. New York: Basic Books, 1999.