Acid rain is a general term describing the pollution that occurs when acids fall out of the atmosphere (mass of air surrounding Earth). The principal pollutants that produce acids in the atmosphere are sulfur dioxide (SO2) and nitrogen oxides, like nitrogen oxide (NO) and nitrogen dioxide (NO2). These compounds combine with water in the atmosphere to form sulfuric acid (H2SO4), and nitric acid (HNO3). Acid rain has significantly affected the waters that flow into lakes and rivers, as well as the lakes and rivers themselves. In turn, the plants and animals that depend on lakes, rivers and oceans are harmed by acid rain.

When describing acid rain, scientists use the more precise term acid deposition. Scientists distinguish between two types of acid deposition: dry and wet. Dry deposition includes acidic gases and solid particles containing sulfuric and nitric acid that settle out of the air and land on the ground or other surfaces. Dry deposition usually occurs very close to the point where the pollutants are released. Wet deposition occurs when precipitation, such as rain, sleet, fog, and snow, becomes acidic and falls to the ground. Wet deposition can occur hundreds of miles (kilometers) from the place where the air pollution originates.

Acid rain and the pH scale

The scale that is used to measure the acidity of a substance is called the pH scale. The pH scale runs from 0 to 14. If a material has a pH of 7 it is neutral, meaning that it is neither acidic nor alkaline (basic). Substances with pH values less than 7 are acidic and substances with pH values greater than 7 are alkaline. Page 378  |  Top of Article Distilled water is neutral, with a pH of 7. Lemon juice and vinegar are both acidic; they have pH values of 2.3 and 3.3, respectively. Baking soda, with a pH of 8.2, and milk of magnesia, with a pH of 10.5, are both alkaline. Combining an alkaline substance with an acidic substance results in a substance with a pH value that is closer to 7 than either of the original substances. This is called neutralization.

Natural rain water is slightly acidic. Chemical reactions between pure water and carbon dioxide in the atmosphere result in a weak acid. The pH of natural rainwater is between 5 and 6. This acidity is useful because when the rain falls to the ground, it can dissolve minerals in the soil that plants use to grow. Acid rain is anywhere from ten to ten thousand times more acid than natural rain, with a pH between 4.5 and 1.5.

The major sources of acid deposition

Acid deposition forms from the burning of fossil fuels, which are used in cars, factories, electricity generation, and other industries. Fossil fuels were formed over thousands of years by dead plants and animals. After these plants and animals died they were buried under sediments (particles of sand, silt, and clay). The intense pressure and increases in temperature under these sediments chemically changed the dead plants and animals into the fuels that are used to drive cars and generate electricity today. When fuel is burned it not only releases the energy that is used to power electrical devices, but it also releases chemicals, such as sulfur dioxide and nitrogen oxides that form acid rain.

Acid deposition is extremely corrosive, especially to soft stones. Many famous buildings throughout the world show signs of acid damage. For example, the Parthenon in Athens, the Coliseum in Rome, and the Taj Mahal in India have all been damaged by acid deposition. Monuments in Poland and stained glass windows in Sweden have also suffered from corrosion. Several famous cathedrals in England including St. Paul's, York Minster and Westminster Abbey have shown the effects of acid deposition. Most of this damage is the result of dry deposition.

All of the acid damage on famous structures results in very high restoration costs. In 1984 the Statue of Liberty in New York harbor had to be dismantled at substantial cost because of damage to its metal frame and copper covering by acid deposition. A study in England showed that if sulfur emissions were reduced by 30%, the savings in repair to these famous buildings could be as high as $20 billion. 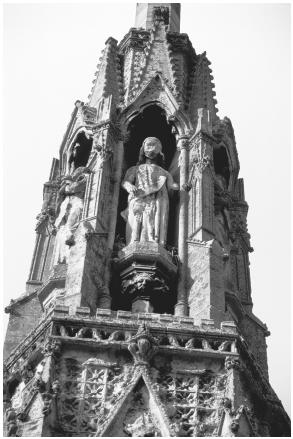 Acid rain and other pollution scar a village monument in Derby, England. © Chinch Gryniewicz/Corbis. Reproduced by permission. sulfur compounds that cause acid rain. The U.S. Environmental Protection Agency (EPA) reports that about two-thirds of all sulfur dioxide and one-quarter of all nitrogen oxides in the atmosphere originate from coal burning electric power plants.

Acid deposition in lakes and rivers

Under natural conditions, rainwater, which is slightly acidic, runs through the soils near a lake. These soils often contain Page 380  |  Top of Article limestone or calcium, which is alkaline and neutralizes the acid. The water in a healthy lake usually has a pH around 6.5, which allows for the growth of a variety of plants, invertebrates (animals without a backbone), and fish.

In addition, as more acidic water passes through the soils, chemical reactions occur in the soils that cause harmful minerals such as aluminum to be released. These minerals run into the lake where they are taken up by plants and invertebrates. The plants and invertebrates are then eaten by fish, which are consumed by birds that live nearby. Because the birds must eat so many fish in order to survive, the aluminum is concentrated in their bodies. High levels of aluminum cause the birds to lay eggs with very fragile shells. Often the eggs break or become dry inside. Other times, baby birds are born with physical deformities.

Because of its chemical composition, the nitrogen and sulfur-based acids that cause acid deposition in fresh water lakes and rivers do not have a strong effect on the acidity of the ocean. However, carbon compounds in the atmosphere are responsible for increased acidity. Burning of fossil fuels releases carbon dioxide Page 381  |  Top of Article (CO2) into the atmosphere. Carbon dioxide levels in the atmosphere are currently the highest they have been in 55 million years. When it combines with seawater, this carbon dioxide produces carbonic acid, which makes seawater more acidic. This acidity will have a very negative effect on all marine organisms that make shells out of calcium carbonate, such as corals and mollusks, because it reduces the availability of calcium ions (the building blocks of shells) in seawater.

The ways that acid rain harms forests are complicated and interconnected. Acid rain harms both the soils that trees use to grow and the trees themselves. As acid rain falls on the soil in a forest, it washes away nutrients such as calcium and magnesium that are needed by trees to grow. In addition, acid rain releases from the soil toxic (poisonous) minerals such as aluminum that are then absorbed by the plants' roots. This causes severe damage to the trees' roots and weakens the trees. As acid rain falls on the trees themselves, it burns the needles at the top and at the tips of branches, which are then shed. This reduces the ability of the trees to make food from photosynthesis (process of converting the energy of sunlight into food) and to grow. Trees are then more vulnerable to environmental stresses like disease, drought (prolonged periods of dry weather), and insects. A tree that is exposed to acid rain will absorb extra alkaline substances from the soil, making the soil acidic. This means that the acid rain falling on the soil makes the soil even more acidic, compounding the problems of acid rain. 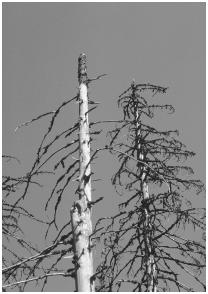 Decline in forests due to acid rain has been a serious problem throughout the Northern Hemisphere. In the 1990s surveys of the Black Forest in Germany showed that half of the trees were dead or dying as a result of acid deposition. Between 1970 and 1998 nearly half the red spruce trees in the northeastern United States died. Many sugar maples in Canada and the United States are also dying. Throughout Scandinavia, forests are dying because of acid rain. Most of the acid rain that affects these countries travels hundreds of miles (kilometers) from its sources in other parts of Europe.

Corrosion due to acid deposition

Acid deposition damages most surfaces on which it falls. In particular, dry deposition etches the paint on cars, corrodes metals, and deteriorates stone. In particular, buildings made of limestone and marble contain a lot of calcium carbonate. The acid in dry deposition, reacts with the calcium carbonate to form a powder. This powder is easily washed away when it rains. A variety of famous buildings and sculptures, especially in Europe, have been damaged by acid deposition.

In 1990 the EPA established the Acid Rain Program as part of the Clean Air Act. The goal of the program is to reduce the emissions of sulfur dioxide and nitrogen oxides. Much of the work in this program involves creating the correct economic incentives for factories and electrical plants to improve the quality of the materials they release into the air. Companies decide how they want to achieve emissions reductions. Some may choose to install special devices on their smokestacks that cleanse the pollutants out of the emissions. Others may use fuel that is less polluting or may use renewable energy sources. Finally, companies can trade for emissions allowances (the amount of pollutants that can be legally released) from companies that have already reduced their emissions below the standard levels.

Beginning in the 1960s scientists noticed that many of the trees of Central Europe were dying. In particular, in the Black Forest, which is located in Southwestern Germany, a large number of trees showed signs of weakening and dying. The term daldsterben, or tree death, was coined to describe the problem. The first trees to be struck with the affliction were the pines, followed by deciduous trees (trees that lose their leaves each year). By 1990 at least half the trees in the Black Forest were harmed. Many trees dried out and died, while others dropped leaves or became discolored. The problem was eventually attributed to acid deposition in the forest. Although several types of remediation techniques, such as replanting trees, were tried, none have yet been successful. Scientists assume that the damage to the soil has made it so acidic that new trees can no longer grow in these ancient forests under current conditions.

The Acid Rain Program has been more successful at controlling sulfur pollutants than nitrogen pollutants. Since 1980 sulfur emissions from large factories have fallen by nearly one-half, from 9.4 to 4.7 million tons of sulfur dioxide a year. Much of these improvements in emissions have occurred in the parts of the country where pollution is the biggest problem, such as in Ohio and Indiana. As a result the concentration of sulfuric acid in the Northeast and the Mid-Atlantic states has fallen by about 25% and lakes in these regions are showing signs of recovery. The emissions of nitrogen oxides have remained fairly constant over the last decade. As a result, the deposition of nitric acid into the environment has remained essentially unchanged.