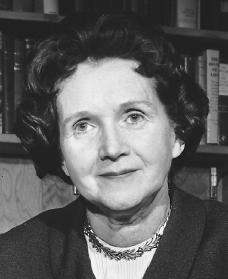 Rachel Carson was an American biologist and writer whose book Silent Spring awakened the public to the dangers of pollution and its impact on the environment. Because of her work, she is considered a pioneer in the modern environmental movement.

Rachel Louise Carson was born May 27, 1907, in Springdale, Pennsylvania. A quiet child who kept to herself, she spent long hours learning about nature through her mother, a musician and schoolteacher. Carson's mother also inspired her daughter's interest in literature, and at a very young age Carson knew she wanted to become a writer. Carson sealed her ambitions to write when, at the age of ten, she published her first piece in a national children's magazine.

In high school, Carson was an intelligent and motivated student who impressed her teachers. In college Carson studied English at the Pennsylvania College for Women in Pittsburgh, Pennsylvania. But she changed her major to biology after rediscovering her love for science. After earning her undergraduate degree, she studied creative writing at Johns Hopkins University, where she earned a master's degree. She completed her postgraduate studies at the Woods Hole Marine Biological Laboratory in Massachusetts.

In 1936 Carson served as an aquatic biologist with the U.S. Bureau of Fisheries. A year later Carson published a well-received essay in the national publication Atlantic Monthly, which would ultimately lead to her first book, Under the Sea Wind (1941). She soon became editor-in-chief of the Fish and Wildlife Service, U.S. Department of the Interior, a department dedicated to the conservation (protection) of wildlife. During this time she honed her writing skills, which focused on wildlife conservation. In 1951 The Sea around Us brought its author instant fame. At the top of the best-seller list for thirty-nine weeks, it was translated into thirty languages. For the book the shy, soft-spoken Carson received the National Book Award, the Gold Medal of the New York Zoological Society, and the John Burroughs Medal.

The following year Carson left the government to undertake full-time writing and Page 379  |  Top of Article research. As a scientist and as an observant human being, the overwhelming effects of technology upon the natural world increasingly disturbed her. She wrote at the time: "I suppose my thinking began to be affected soon after atomic science [an energy process which can have an extreme effect on the environment] was firmly established … It was pleasant to believe that much of Nature was forever beyond the tampering reach of man: I have now opened my eyes and my mind. I may not like what I see, but it does no good to ignore it."

When Silent Spring appeared in 1962, the poetic pen and scientific mind of Carson produced an impact equaled by few scientists. In fact, she had aroused an entire nation. More than a billion dollars worth of chemical sprays were being sold and used in America each year. Carson traced the course of chlorinated hydrocarbons, a harmful substance found in the pesticides (chemicals used to protect crops from insects), through energy cycles and food chains. She learned that highly toxic (deadly) materials, contaminating the environment and lasting for many years in waters and soils, also tended to build up in the human body. Insect species that were the targets for these poisons began developing immunities (resistance) to pesticides, and because of these poisons in the insects, birds were not reproducing. In fact, the entire food chain and environmental balance was becoming disrupted because of these chemicals. Carson proposed strict limitations on spraying programs and an accelerated research effort to develop natural and biological controls for harmful insects.

The pesticide industry reacted with a massive campaign to damage the reputation of Carson and her findings. Firmly and gently, she spent the next two years educating the public at large. "I think we are challenged as mankind has never been challenged before," she once said, "to prove our maturity and our mastery, not of nature, but of ourselves." She died on April, 14, 1964, in Silver Spring, Maryland. Though her work was just beginning at the time of her death, through her pen Carson opened the eyes of a nation and inspired environmental activism in a country that was rapidly losing its own natural resources.