Caffeine (kaf-EEN) is an organic base that occurs naturally in a number of plant products, including coffee beans, tea leaves, and kola nuts. It occurs as a fleecy white crystalline material, often in the form of long, silky needles. It usually exists as the monohydrate, C8H10N4O2·H2O, although it gives up its water of hydration readily when exposed to air.

Scientists believe that humans have been drinking beverages that contain caffeine for thousands of years. The first recorded reference to a caffeine drink can be found in a Chinese reference to the consumption of tea by the emperor Shen Nung in about 2700 BCE. Coffee is apparently a much more recent drink, with the earliest cultivation of the coffee tree dated at about 575 CE in Africa.

Caffeine was first studied scientifically by two French chemists, Joseph Bienaimé Caventou (1795–1877) and Pierre Joseph Pelletier (1788–1842), who were very interested in the chemical properties of the alkaloids. Between 1817 Page 138  |  Top of Article 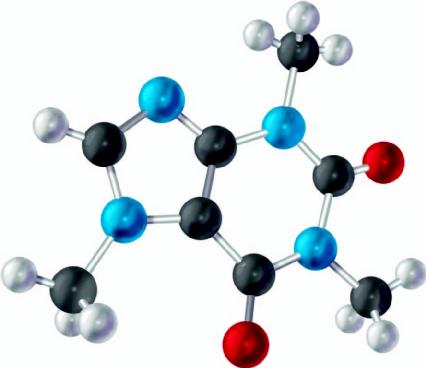 Caffeine. Red atoms are oxygen; white atoms are hydrogen; black atoms are carbon; and blue atoms are nitrogen. Gray sticks are double bonds. Publishers Resource Group and 1821, Caventou and Pelletier successfully extracted caffeine, quinine, strychnine, brucine, chinchonine, and chlorophyll (not an alkaloid) from a variety of plants. The first synthesis of caffeine was accomplished in 1895 by the German chemist Emil Hermann Fischer (1852–1919), who was awarded the 1902 Nobel Prize in chemistry for his work on the alkaloids.

Caffeine belongs to a class of alkaloids called the methylxanthines. Chocolate, from the cocoa tree Theobroma cacao contains another member of the class, theobromine. Both caffeine and theobromine are stimulants, that is, compounds Page 139  |  Top of Articlethat act on the nervous system to produce alertness, excitement, and increased physical and mental activity.

HOW IT IS MADE

Caffeine can be extracted from coffee, tea, and kola plants by one of three methods. These methods are used primarily to produce the decaffeinated counterparts of the products: decaffeinated coffee, decaffeinated tea, or decaffeinated soft drinks. A commercial variation of these procedures is to treat the waste products of tea or coffee processing, such as the dust and sweepings collected from factories, for the extraction of caffeine.

In the first of the three extraction methods, the natural product (coffee beans, tea leaves, or kola beans) are treated with an organic solvent that dissolves the caffeine from the plant material. The solvent is then evaporated leaving behind the pure caffeine. A second method follows essentially the same procedure, except that hot water is used as the solvent for the caffeine. A more recent procedure involves the use of supercritical carbon dioxide for the extraction process. Supercritical carbon dioxide is a form of the familiar gas that exists at high temperature and high pressure. It behaves as both a liquid and a gas. Not only is the supercritical carbon dioxide procedure an efficient method of extracting caffeine, but it has virtually none of the harmful environmental and health problems associated with each of the other two methods of extraction.

Caffeine is also made synthetically by heating a combination of the silver salt of theobromine (C7H8N4O2Ag) with methyl iodide (CH2I), resulting in the addition of one carbon Page 140  |  Top of Articleand two hydrogens to the theobromine molecule and converting it to caffeine.

Caffeine is used in foods and drinks and for medical purposes. Its primary action is to stimulate the central nervous system. People drink coffee, tea, or cola drinks to stay awake and alert because caffeine creates a feeling of added energy. It does this by increasing heart rate, improving blood flow to the muscles, opening airways to aid breathing, and releasing stored energy from the liver to provided added fuel for the body. In large quantities, caffeine can also cause nervousness, insomnia, and heart problems. The effects of caffeine can linger in the body for more than six hours. In medical applications, caffeine is sometimes used as a heart stimulant for patients in shock, to treat apnea (loss of breathing) in newborn babies, to counteract depressed breathing levels as a result of drug overdoses, and as a diuretic.

Caffeine stimulates the brain in two ways. First, because it has a chemical structure similar to that of adenosine, it attaches to adenosine receptors in the brain. Adenosine is a substance that normally attaches to those receptors, slowing brain activity and causing drowsiness. By blocking those receptors, caffeine increases electrical activity in the brain, creating a feeling of alertness. Caffeine also works in the brain like drugs such as heroin and cocaine, although in a much milder way. Like those drugs, caffeine increases dopamine levels. Dopamine is a chemical present in the brain that increases the body's feeling of pleasure.

ALKALOIDS
Organic bases that contain the element nitrogen.
DIURETIC
A substance that increases the flow of urine.
WATER OF HYDRATION
Water that has combined with a compound by some physical means.

Studies have shown that caffeine can become addictive. People who use the compound eventually need to take more Page 141  |  Top of Articleand more of it to get the same effect. When some people try to stop using caffeine, they may suffer from headache, fatigue, and depression, though these symptoms can be controlled by gradually reducing the amount of caffeine consumed. Either way, withdrawal symptoms end after about a week.

Weinberg, Alan Bennet, and Bonnie K. Bealer. The World of Caffeine: The Science and Culture of the World's Most Popular Drug. New York: Routledge, 2002.