The Black Panther Party for Self-Defense was founded in October 1966 by Huey P. Newton (1942–1989) and Bobby Seale (b. 1936). Despite periods of imprisonment, the two remained leaders as the party expanded from its Oakland, California, base to become a national organization. Assuming the posts of defense minister and chairman, respectively, Newton and Seale drafted a ten-point platform that included a wide range of demands, summarized in the final point: "We want land, bread, housing, education, clothing, justice and peace." However, the party's appeal among young African Americans was based mainly on its brash militancy, often expressed in confrontations with police. Initially concentrated in the San Francisco Bay area and Los Angeles, by the end of 1968 the Black Panther Party ("for Self-Defense" was dropped from its name) had formed chapters in dozens of cities throughout the United States, with additional support chapters abroad. Although most of its leaders were male, a substantial proportion of its rank-and-file members were female. Influenced by the ideas of Marx and Malcolm X, the Black Panther Party's ideology was not clearly defined, and the party experienced many internal disputes over its political orientation. The FBI's covert Counterintelligence Program (COINTELPRO) and raids by local police forces exacerbated leadership conflicts, resulted in the imprisonment or death of party members, and hastened the decline of the group after 1968.

After joining the party in 1967, Eldridge Cleaver (1935–1998), a former convict and author of a book of essays titled Soul on Ice, became one of the party's main spokespersons and provided a link with white leftist supporters. Arrested in May 1967 during a protest at the California state capitol in Sacramento against pending legislation to restrict the carrying of weapons, Cleaver remained affiliated with the Panthers despite the repeated efforts of authorities to return him to prison for parole violations. His caustic attacks on white authorities combined with media images of armed Panthers wearing black leather 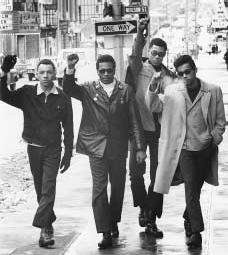 jackets attracted notoriety and many recruits during the summer of 1967. Cleaver's prominence in the Black Panther Party increased after October 28, 1967, when Newton was arrested after an altercation that resulted in the death of an Oakland police officer. The Panthers immediately mobilized to free Newton, who faced a possible death sentence if convicted. As part of this support effort, Cleaver and Seale contacted Stokely Carmichael (1941–1998), the former chairman of the Student Nonviolent Coordinating Committee (SNCC) and a nationally known proponent of Black Power. SNCC activists and representatives from other black militant groups participated in "Free Huey" rallies during February 1968, helping to transform the Panthers from a local group into a national organization. When Cleaver was arrested during an April 6 raid that resulted in the killing of party treasurer Bobby Hutton, his parole was revoked, and his legal defense, as well as that of Newton, became a major focus of Panther activities.

Serious conflicts accompanied the party's rapid growth, however, for its leaders were divided over ideological and tactical issues. Cleaver and Seale were unsuccessful in their effort to forge an alliance with SNCC, whose members distrusted the Panthers' hierarchical leadership style. When relations between the two groups soured during the summer of 1968, Carmichael decided to remain allied with the Panthers, but his advocacy of black unity and Pan-Africanism put him at odds with other Panther leaders, who advocated class unity and close ties with the white New Left. Although his presence helped the Panthers to establish strong chapters in the eastern United States, Carmichael severed ties with the party after he established residency in Africa in 1969. The party's relations with southern California followers of black nationalist Maulana Karenga (b. 1941) also deteriorated, a result both of the FBI's COINTELPRO efforts and the Panthers' harsh criticisms of Karenga's cultural nationalist orientation. In January 1969, two members of Karenga's U.S. organization killed two Panthers during a clash at UCLA.

Although the Black Panther Party gradually shifted its emphasis from revolutionary rhetoric and armed confrontations with police to "survival programs," such as free breakfasts for children and educational projects, clashes with police and legal prosecutions decimated the party's leadership. Soon after finishing his 1968 presidential campaign as the candidate of the Peace and Freedom Party, Cleaver left for exile in Cuba and then Algeria to avoid returning to prison for parole violations. In March 1969, Seale was arrested for conspiracy to incite rioting at the 1968 Democratic Convention in Chicago, and in May 1969, Connecticut officials charged Seale and seven other Panthers with murder in the slaying of party member Alex Rackley, who was believed to be a police informant. In New York, twenty-one Panthers were charged with plotting to assassinate policemen and blow up buildings. Though nearly all charges brought against Panther members either did not result in convictions or were overturned on appeal, the prosecutions absorbed much of the party's resources. An effort during 1969 to purge members considered disloyal or unreliable only partly succeeded.

"We want freedom. We want power to determine the destiny of our black community."

In 1970, when Newton's conviction on a lesser manslaughter charge was reversed on appeal, he returned to find the party in disarray. Seale still faced murder charges (they were dropped the following year), while the chief of staff, David Hilliard (b. 1942), awaited trial on charges ofPage 268  |  Top of Article threatening the life of President Richard Nixon. Further, some chapters, particular those in the eastern United States, resisted direction from the Oakland headquarters. In 1971 Newton split with Cleaver, then in exile in Algeria, charging that the Cleaver's influence in the party had caused it to place too much emphasis on armed rebellion. In 1973 Seale ran an unsuccessful, though formidable, campaign for mayor of Oakland. The following year, Newton, facing new criminal charges and allegations of drug use, fled to Cuba. After Newton's departure, Elaine Brown (b. 1943) took over the leadership of the ailing organization. The Black Panther Party continued to decline, however, and, even after Newton returned in 1977 to resume control, the group never regained its former prominence.

Cleaver, Kathleen, and George Katsiaficas, eds. Liberation, Imagination, and the Black Panther Party: A New Look at the Panthers and Their Legacy. New York: Routledge, 2001.

Heath, G. Louis, ed. Off the Pigs! The History and Literature of the Black Panther Party. Metuchen, N.J.: Scarecrow Press, 1976.

Hilliard, David, and Lewis Cole. This Side of Glory: The Autobiography of David Hilliard and the Story of the Black Panther Party. Boston: Little, Brown, 1993.

Pearson, Hugh. The Shadow of the Panther: Huey Newton and the Price of Black Power in America. Reading, Mass.: Addison-Wesley, 1994.