The Montgomery Bus Boycott began on December 5, 1955, as an effort by black residents to protest the trial that day in the Montgomery Recorder's Court of Rosa McCauley Parks. She had been arrested on December 1 for violating the city's ordinance requiring racial segregation of seating on buses. The boycott had initially been intended to last only for the single day of the trial, but local black support of the strike proved so great that, at a meeting that afternoon, black community leaders decided to continue the boycott until city and bus company authorities met black demands for (1) the adoption by the bus company 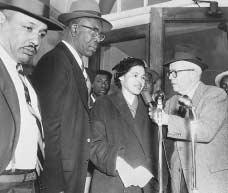 in Montgomery of the pattern of seating segregation used by the same company in Mobile; (2) the hiring of black bus drivers on predominantly black routes; and (3) greater courtesy by drivers toward passengers. The leaders formed the Montgomery Improvement Association (MIA) to run the extended boycott. At a mass meeting that evening, several thousand blacks ratified these decisions.

The Mobile plan sought by the boycott differed from the Montgomery pattern in that passengers, once seated, could not be unseated by drivers. In Mobile, blacks seated from the back and whites from the front, but after the bus was full, the racial division could be adjusted only when riders disembarked. On Montgomery's buses, the front ten seats were irrevocably reserved for whites, whether or not there were any whites aboard, and the rear ten seats were in theory similarly reserved for blacks. The racial designation of the middle sixteen seats, however, was adjusted by the drivers to accord with the changing racial composition of the ridership as the bus proceeded along its route. In Rosa Parks's case, when she had taken her seat, it had been in the black section of the bus. Two blocks farther on, all the white seats and the white standing room were taken, but some standing room remained in the rear. The bus driver, J. Fred Blake, then ordered the row of seats in which Parks was sitting cleared to make room for boarding whites. Three blacks complied, but Mrs. Parks refused and was arrested. She was fined fourteen dollars.

Black Montgomerians had long been dissatisfied with the form of bus segregation used in their city. It had originally been adopted for streetcars in August 1900, and had provoked a boycott that had lasted for almost two years. In October 1952 a delegation from the black Women's Political Council had urged the city commission to permit the use of the Mobile seating plan. In a special election in the fall of 1953, a racial liberal with strong black support, Dave Birmingham, was elected to the three-member city commission. Following his inauguration, blacks again pressed the seating proposal at meetings in December 1953 and March 1954, though to no avail. In May 1954, the president of the Women's Political Council, Jo Ann G. Robinson, a professor of English at Alabama State College for Negroes, wrote to the mayor to warn that blacks might launch a boycott if white authorities continued to be adamant. During the municipal election in the spring of 1955, black leaders held a candidates' forum at which they posed questions about issues of interest to the black community. At the head of the list was the adoption of the Mobile seating pattern.

On March 2, only weeks before the election, a black teenager, Claudette Colvin, was arrested for violation of the bus segregation ordinance. Following this incident, representatives of the city and the bus company promised black negotiators that a seating policy more favorable to African Americans would be adopted. However, Dave Birmingham, the racially liberal city commissioner elected in 1953, had integrated the city police force in 1954. As a result of hostility to this action and other similar ones, he was defeated for reelection in 1955 by an outspoken segregationist, Clyde Sellers. The other commissioners at once became less accommodating. By the time that Rosa Parks was arrested in December, the discussions had come to a standstill. Mrs. Parks, the secretary of the Montgomery branch of the National Association for the Advancement of Colored People (NAACP), shared with other black leaders the frustration that grew out of the negotiations with municipal authorities. This frustration produced her refusal to vacate her seat.

From the city jail, Parks telephoned Edgar D. Nixon, a Pullman porter who was a former president of the Montgomery NAACP branch. After Nixon had posted bail for Parks, he called other prominent blacks to propose the one-day boycott. The response was generally positive. At Jo Ann Robinson's suggestion, the Women's Political Council immediately began distributing leaflets urging the action. It was then endorsed by the city's black ministers and other leaders at a meeting at the Dexter Avenue Baptist Church. The result was almost universal black participation.

At the December 5 meeting, when it was decided to continue the boycott and to form the Montgomery Improvement Association (MIA), the Reverend Dr. Martin Luther King Jr. was chosen as the MIA's president, principally because, as a young man who had lived in the cityPage 1473  |  Top of Article only fifteen months, he was not as yet involved in the bitter rivalry for leadership of the black community between Nixon and Rufus A. Lewis, a funeral director. Nixon was elected the MIA's treasurer, and Lewis was appointed to organize car pools to transport blacks to their jobs without having to use buses. The Reverend Ralph D. Abernathy was named to head the committee designated to reopen negotiations with the city and the bus company.

Initially, the renewed negotiations seemed promising. Mayor William A. Gayle asked a committee of white community leaders to meet with the MIA's delegates. But by January 1956, these discussions had reached a stalemate. The MIA's attorney, Fred D. Gray, urged that the MIA abandon its request for the Mobile plan in favor of filing a federal court lawsuit seeking to declare unconstitutional all forms of seating segregation. The MIA's executive board resisted this proposal until January 30, when Martin Luther King's home was bombed. On the next day, the executive board voted to authorize the suit, which was filed as Browder v. Gayle on February 1.

Meanwhile, similar strains were at work in the white community. A group of moderate businessmen, the Men of Montgomery, was attempting to mediate between the MIA and the city commission. But segregationists were pressing authorities to seek the indictment of the boycott's leaders in state court for violating the Alabama Anti-Boycott Act of 1921, which made it a misdemeanor to conspire to hinder any person from carrying on a lawful business. On February 20, an MIA mass meeting rejected the compromise proposals of the Men of Montgomery, and on February 21, the county grand jury returned indictments of eighty-nine blacks, twenty-four of whom were ministers, under the Anti-Boycott Act.

Martin Luther King, the first to be brought to trial, was convicted by Judge Eugene Carter at the end of March and was fined $500. King appealed, and the remainder of the prosecutions were suspended while the appellate courts considered his case. On May 11, a three-judge federal court heard Browder v. Gayle and on June 5, in an opinion by Circuit Judge Richard Rives, it ruled two to one that any law requiring racially segregated seating on buses violated the equal protection clause of the Constitution's Fourteenth Amendment. The city appealed to the U.S. Supreme Court. Both segregation and the boycott continued while the appeal was pending.

Throughout the thirteen months of negotiations and legal maneuvers, the boycott was sustained by mass meetings and its car-pool operation. The weekly mass meetings, rotated among the city's black churches, continually reinforced the high level of emotional commitment to the movement among the black population. The car pool, modeled on one used during a brief bus boycott in Baton Rouge in 1953, initially consisted of private cars whose owners volunteered to participate. But as contributions flowed in from sympathetic northerners, the MIA eventually purchased a fleet of station wagons, assigned ownership of them to the various black churches, hired drivers, and established regular routes. Rufus Lewis administered the car pool until May 1956, when he was succeeded by the Rev. B. J. Simms.

White authorities eventually realized that the MIA's ability to perpetuate the boycott depended on its successful organization of the car pool. In November the city sued in state court for an injunction to forbid the car-pool operation on the ground that it was infringing on the bus company's exclusive franchise. On November 13, Judge Eugene Carter granted the injunction, and the car pool ceased operation the next day. But on that same day, the U.S. Supreme Court summarily affirmed the previous ruling of the lower federal court that bus segregation was unconstitutional. The city petitioned the Supreme Court for rehearing, and a final order was delayed until December 20. On December 21, 1956, the buses were integrated and the boycott ended.

The city was at once plunged into violence. Snipers fired into the buses, with one of the shots shattering the leg of a pregnant black passenger, Rosa Jordan. The city commission ordered the suspension of night bus service. On January 10, 1957, four black churches and the homes of the Reverend Ralph Abernathy and of the MIA's only white board member, the Reverend Robert Graetz, were bombed and heavily damaged. All bus service was then suspended. On January 27, a home near that of Martin Luther King was bombed and destroyed, and a bomb at King's own home was defused. On January 30, Montgomery police arrested seven bombers, all of whom were members of the Ku Klux Klan.

The arrests ended the violence, and in March full bus service resumed. However, the first two of the bombers to come to trial were acquitted in May 1957, despite their confessions and the irrefutable evidence against them. Meanwhile, in April, the Alabama Court of Appeals had affirmed on technical grounds King's conviction under the Anti-Boycott Act. Because it was now clear that the other bombing prosecutions would be unsuccessful, and because the boycott had ended in any case, prosecutors in November agreed to dismiss all the remaining bombing and anti-boycott-law indictments in return for King's payment of his $500 fine.

The Montgomery Bus Boycott marked the beginning of the civil rights movement's direct action phase, and it made Martin Luther King Jr. a national figure. AlthoughPage 1474  |  Top of Article the integration of the buses was actually produced by the federal court injunction rather than by the boycott, it was the boycott that began the process of moving the civil rights movement out of the courtroom by demonstrating that ordinary African Americans possessed the power to control their own destiny.

Robinson, JoAnn Gibson. The Montgomery Bus Boycott and the Women Who Started It: The Memoir of Jo Ann Gibson Robinson, edited by David J. Garrow. Knoxville: University of Tennessee Press, 1987.