Edward Jenner is commonly regarded as the simple country doctor who, by recognizing the value of prudential folk-knowledge, and by acting with selfless determination to promote his "discovery" of vaccination, started the long march toward the ultimate eradication of smallpox, as yet the only disease to have been effectively eliminated through human endeavor. However, since the 1980s some historical scholarship has sought to explode this myth of heroic individualism by emphasizing the broader medical context in which Jenner operatedPage 1223  |  Top of Article and by demonstrating how the ultimate acceptance of vaccination was due as much to the effectiveness of his social networks and the efforts of his supporters as to any intrinsic "scientific" superiority over alternative practices.

Edward Jenner was born in Berkeley, Gloucestershire, on 17 May 1749 to Sarah Jenner (née Head) and her husband, Stephen, the local vicar. He was the eighth of nine children, and one of six to survive childhood. In October 1754, when Edward was just nine years old, his mother died during childbirth; his father followed just two months later. Orphaned, Edward was cared for by his sisters.

In 1764 Jenner was apprenticed to an apothecary in Chipping Sodbury. Six years later he traveled to London to perfect his knowledge of anatomy and surgery. In the metropolis, the simple country surgeon of legend assimilated himself into a social network that encompassed some of the most influential natural philosophers of the late Enlightenment, including the surgeons John Hunter (1728–1793), Everard Home (1756–1832), and Henry Cline (1750–1827), and the botanist Joseph Banks (1743–1820).

Jenner entertained a wide range of intellectual interests in poetry, botany, and natural history and was elected to the Royal Society in 1789. The importance of sociability to the practice of medicine in this period is evident in his reputation as a fine host and in the names of two local bodies of which he was a member, the Convivio-Medical Society of Alveston and the Medico-Convivial Society, which he helped to establish at Rodborough in 1788.

Smallpox, a disfiguring and potentially lethal disease, was virtually endemic in eighteenth-century Britain and was the subject of considerable medical and public debate. The practice of inoculation, by which matter from the pustule of a smallpox victim was introduced into the skin of a healthy person to produce a mild immunizing infection, had been introduced into Britain by Lady Mary Wortley Montagu in 1721. Inoculation had received the support of the Royal College of Physicians in 1754 and was a fairly widespread practice by the end of the eighteenth century. Inoculation had its problems, however. Although rare, it was not unknown for inoculated persons to develop full-blown smallpox. Fears were also expressed that it could lead to the outbreak of an epidemic among the uninoculated population.

Jenner seems to have long been aware of the idea, prevalent in the rural areas of western England, that those who contracted cowpox, a similar, but much milder and more localized disease present in cattle, never caught smallpox. He had discussed the matter with friends and colleagues in the early 1770s but it was not until the 1790s that he undertook preliminary investigations. In 1796 Jenner (now a physician, courtesy of the University of St. Andrew's) recorded his first attempt to inoculate using cowpox matter, which was taken from the pustule of a milkmaid, Sarah Nelmes (who had allegedly contracted it from a cow called Blossom), and given to a boy named James Phipps. Jenner subsequently inoculated Phipps with smallpox, but the boy remained unaffected, suggesting that cowpox had indeed conferred immunity to the disease. Jenner intended to publish his findings in the Philosophical Transactions but was discouraged from doing so by Home and Banks. He thus undertook further investigations before publishing his Inquiry into… Cowpox (1798). In this and subsequent publications he asserted that cowpox could offer lifelong immunity to smallpox and could be serially transferred from arm to arm.

Vaccination (a term deriving from the Latin vacca for "cow"), excited much interest, but also aroused a great deal of controversy among those who were attached to the existing practice of inoculation and those who were opposed, morally and/or intellectually, to the introduction of pathological animal matter into the human body. Despite this, however, Jenner's theories gained ground, not least because of his social connections. 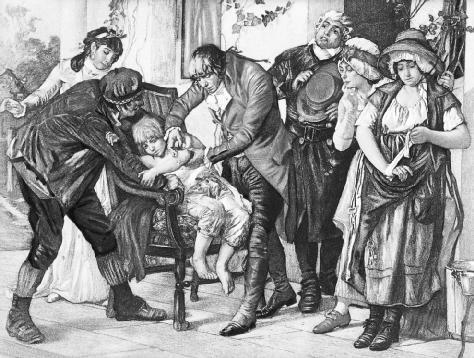 He enjoyed the support of many influential metropolitan practitioners and secured the patronage of George III (r. 1760–1820), Queen Charlotte, and the Prince of Wales (who, as George IV, made him physician-extraordinary in 1821). Vaccination was officially adopted by the army and navy, and in 1802 Jenner received a parliamentary grant of £10,000, followed in 1807 by a further award of £20,000, to compensate him for the fact that he had made no direct profit from his researches.

Jenner's fame was in part a combination of his own talent for self-promotion and the mythologizing activities of his supporters, both during his life and after his death. In 1803 they founded the Royal Jennerian Society (reformed as the National Vaccine Establishment in 1809) to promote the practice of vaccination. In addition, paintings were commissioned, medals struck, and statues built, all of which contributed to the image of Jenner as a man of singular genius.

Edward Jenner died from a stroke at his house in Berkeley on 26 January 1823. By this time vaccination was an established practice in Britain, and in 1840 it was made freely available to all by law. This was followed in 1853 by legislation making it compulsory for all infants. Nonetheless, it continued to arouse controversy well into the twentieth century and was opposed by those who objected to it on moral or religious grounds ("conscientious objection" was permitted by an act of 1898), those who objected to the legislative establishment of medical professional authority, and others who saw it as an infringement of the rights of the individual.

Bazin, Hervé. The Eradication of Smallpox: Edward Jenner and the First and Only Eradication of a Human Infectious Disease. Translated by Andrew and Glenise Morgan. London, 2000.