Joseph Lister was born on 5 April 1827 in the village of Upton, Essex. His father, a Quaker and fellow of the Royal Society, encouraged Lister's early interest in microscopy. In 1844 he attended University College, London. Although he joined the college's arts faculty, Lister maintained his scientific interests and, after a break to recuperate from a bout of smallpox, he entered University College Medical School in 1847. The school was unique among English medical schools in its emphasis on experimental science as the basis of good medical practice. This view informed much of Lister's subsequent career.

Lister graduated in 1851 and took a post as junior surgeon in the Royal Infirmary, Edinburgh. He continued his research under the patronage of James Syme, professor of clinical surgery, and in 1860 married Syme's daughter Agnes. In the same year Lister moved to Glasgow to take up the chair of surgery. Here he began to consider the complex problem of surgical sepsis.

At this time patients undergoing hospital surgery suffered high death rates: estimates range from 10 to 45 percent. Postoperative wound infection—the "hospital diseases" such as gangrene and erysipelas—caused most of these deaths. Many of the leading figures in the Victorian public health reform movement—such as Edwin Chadwick, author of the influential Report on the Sanitary Condition of the Labouring Population (1842)—blamed high mortality rates on the size and location of the hospitals themselves. Their solution was to break up the large city hospitals and replace them with smaller rural institutions. The challenge facing Lister and his colleagues was not merely to solve the problem of surgical sepsis, but to do it in a way that could vindicate both experimental medicine and hospital surgery.

Lister took as his inspirations the germ theory of disease developed by Louis Pasteur (1822–1895) and the prevailing notion that inflammation and suppuration were a necessary part of wound healing. He sought a technique that would allow the body to heal naturally through the production of "laudable pus," while keeping out airborne contaminants that he thought would lead to critical infection. In a short paper in the Lancet in March 1867 Lister advocated the use of carbolic acid, applied to wound dressings, as a means of preventing sepsis and described eleven cases of compound fracture that he had treated successfully with this method.

The medical profession's response to Lister's "antiseptic" method was mixed. Some older surgeons opposed the encroachment of science on the "craft" of surgery, and others argued that carbolic was unnecessary. However, his technique was widely discussed and, by 1870, widely used. Lister continually modified his method: in 1870 he introduced a steam-powered carbolic spray for use during operations. His other innovations included a lighter, more flexible gauze dressing, rubber tubes that could be inserted into wounds to drain away pus, and (perhaps his most enduring innovation) the dissolvable suture.

Lister's return to London in 1877 as professor of surgery at King's College provided an opportunity to change the theoretical basis of antisepsis, as Pasteur's germ theory was replaced by that of the German bacteriologist Robert Koch (1843–1910). After Koch showed that skin-borne rather than airborne pathogens were the major cause of infection, Lister's carbolic spray (unpopular also because it drenched surgeons in warm acid) became obsolete. Also discarded was the idea of "laudable pus": Koch had shown that all suppuration represented infection. From the early 1880s German surgeons had begun to combine Koch's and Lister's observations, using soap to clean their hands and high-pressure steam to sterilize instruments and garments. This "aseptic" method was taken up in Britain, where by 1900 it had replaced "Listerism" as the preferred method of preventing sepsis. Lister retired from King's College in 1893 and moved to Walmer, Kent, where he died on 10 February 1912. He had no children.

Lister's impact on surgical practice must be separated from public perceptions of his work. Even in his lifetime Lister was hailed as the "father of modern surgery": in 1883 he received a baronetcy and in 1897 a peerage (the first British clinician to be so honored). His early biographers credited him with both the antiseptic and the aseptic methods, and also with significant contributions to modern germ theory. Twenty-first-century historians—notably Christopher Lawrence—have challenged this view and sought to contextualize Lister's work in Victorian 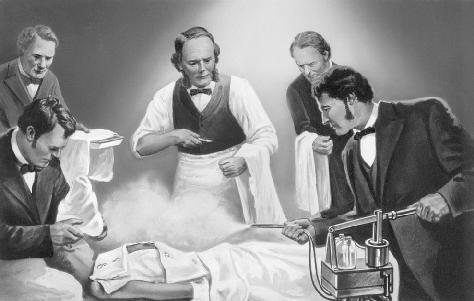 culture. Lister exemplified the Victorian "Great Man": a faithful husband, committed to working for the public good, he was revered by politicians and journalists. By helping to change the public image of surgery from a bloody craft to a clinical science, Lister greatly improved the standing of the surgical profession within society. This earned Lister the respect and support of his colleagues, whatever their views on the validity of his theories or his actual contribution to their practice.

Lister, Joseph. "On a New Method of Treating Compound Fractures, Abscesses, etc., with Observations on the Condition of Suppuration." Lancet 89 (1867): 326–329.

Gaw, Jerry L. "A Time to Heal": The Diffusion of Listerism in Victorian Britain. Philadelphia, 1999. Penetrating analysis of the sociopolitical context of Lister's work.

Granshaw, Lindsay. "'Upon This Principle I Have Based a Practice': The Development and Reception of Antisepsis in Britain, 1867–90." In Medical Innovations in Historical Perspective, edited by John Pickstone, 17–46. London, 1992. Excellent summary of current scholarship on Lister and Listerism.

Lawrence, Christopher, and Richard Dixey. "Practising on Principle: Joseph Lister and the Germ Theories of Disease." In Medical Theory, Surgical Practice: Studies in the History of Surgery, edited by Christopher Lawrence, 153–215. London, 1992. Superb deconstruction of the "Lister Myth."