The Pasteurian revolution may have been the final touch to an internal line of development in scientific thought and medical practice, but the most spectacular and far-reaching effects of Louis Pasteur's discoveries were in the field of public health. Pasteur the experimenter revolutionized public health by proving bacterial pollution, demonstrating pollution prevention through pasteurization, describing the microbial etiology of infectious diseases, and demonstrating that disease could be prevented through vaccination.

FIRST LESSONS: FROM CRYSTALS TO MICROBES

Louis Pasteur was born at Dole, France, into a modest family whose name had never shone inPage 1743  |  Top of Article history. His father operated a tannery at Marmoz, Franche-Comté, where Pasteur spent his childhood. In October 1843 he entered the École Nationale in Paris and worked in the laboratory of Jérôme Balard. Pasteur built his first discovery on tartaric and para-tartaric acids: he showed that the two substances are identical but that their atomic positions are reversed. Pasteur defined what thirty-five years later Lord Kelvin (William Thomson), was to call chirality, from the Greek kheir, the hand, a symbol to designate a shape that cannot be super-imposed on its mirror image.

This success led Pasteur to study the optical activity of a whole series of substances. At the University of Strasbourg, where he was appointed as professor of chemistry in January 1849, Pasteur examined meticulously diverse kinds of molecules and was intrigued by a strange finding: asymmetry, it appeared, had its limits. All the substances composed of asymmetrical molecules came from plant, human, or animal models. Conversely, chemical substances that do not deviate light and possess an axis of symmetry are all of mineral origin. Pasteur deduced that the molecules of life are asymmetrical. Applying this discovery to fermentation, he went on to consider it as a natural biological occurrence, not as an artificial chemical synthesis. To prove that the fermentation was a germ of life he switched from crystals to microbes, from chemistry to microbiology and immunology.

Pasteur had begun his studies on fermentation in 1854 at the University of Lille, where he had been appointed dean of the science faculty two years earlier, and he soon turned his attention to incomplete distillation. He took a microscope to a beet sugar factory and spent days on end making alcohol. Looking through the eyepiece he watched the growth of the globules that were present as sugar was being turned into alcohol. Pasteur showed that minute organisms acted because they were alive and breathing. In holding his own against some of the greatest biochemical theories of the time, which maintained that fermentus was indispensable because of its capacity to disappear, Pasteur was going to give the germ its due importance in alcohol and lactic fermentation and then in the rotting process. Aerobic germs are necessary to the life cycle since they take in oxygen and expel carbon dioxide, which is absorbed by plants. Building on this, he held that microorganisms, both parasitic and useful ones, must be everywhere—in the water, the air, the ground. This hypothesis from the outset was waged against one of the major philosophical and biological problems of the nineteenth century: the theory of spontaneous generation, which claimed that germs are born directly in mineral matter.

To show that such theory was wrong and that spontaneous generation does not occur, Pasteur first had to develop a new experimental strategy. At the École Normale Supérieure, where he had been appointed director of scientific studies in 1857, he invented an external device used to pump air from the school's garden and filter it through a fluff of cotton. Microbes could be detected when the cotton was washed on a watch glass. This debate on spontaneous generation was to turn into an analysis of air and the first epidemiological analyses of the presence of microorganisms in the environment. Pasteur showed that germs vary in relation to place and season depending on climatic conditions and hygiene.

In 1865, upon orders from Napoleon III, Pasteur went to work on wine diseases, using heat as a source of prevention. He adopted Nicolas Appert's procedure for food keeping and recommended a new method for conserving wine: heating between 60°C and 100°C in an air-free environment for one to two hours. The pasteurization method circled the globe.

From 1865 through 1869 he investigated the pebrine disease that had been devastating the production of raw silk. He discovered that silkworms were contaminated when hatched, as the butterfly was already sick because of a minuscule parasite. Pasteur demonstrated that healthy eggs could be seen under a microscope and hatched. His cellular system helped end the disease by 1875.

In France, by the end of the Franco-Prussian War of 1870–1871, a surgeon named Alphonse Guérin began to accept that infection could be caused by the microbes described by Pasteur. By applying a cotton dressing, Guérin was able to avoid microbial overinfection. 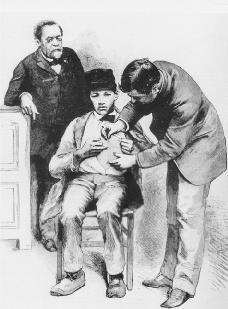 Louis Pasteur. Pasteur observes as a boy is innoculated against rabies in this 1885 print. ©BETTMAN/CORBIS

It was Joseph Lister from England, however, who was the first to officially apply Pasteur's discoveries to medicine. In 1865 Thomas Anderson, a chemistry professor in Glasgow, first showed Lister reports from Pasteur. Lister suddenly understood the link that might exist between the decomposition of organic matter and postoperative infections. He, like Pasteur, believed that the ambient air was one of the main pathways for the propagation of germs. He thought it would be possible to kill the germs using a substance that would not be toxic to human tissue but could prevent abscess formation, even in a nonsterile environment. In recounting the circumstances that convinced him of such hypothesis, Lister explained that he had been very impressed by a report on the remarkable effects of carbolic acid on sewer water. Understanding that carbolic acid not only removed the smells but also killed the germs, he discovered antisepsis.

THE MICROBIAL THEORY OF INFECTIOUS DISEASES

The debate on aspesis and antisepsis only provided indirect arguments on the pathogenic effect of germs. The absence of germs indeed prevented the diseases, but it did not confirm the cause-and-effect link. Direct evidence came from Pasteur's work on anthrax.

Anthrax is a redoubtable infectious disease that wipes out whole herds of cattle and flocks of sheep. Sick animals soon collapse in the field. Scientists before Pasteur, such as Casimir-Joseph Davaine in France and Robert Koch in Germany, felt that bacteria were the cause but had not been able to prove it.

To demonstrate that bacteria transmitted the disease, Pasteur performed a simple experiment. All he had to do was dilute a drop of anthrax-infected blood and simulate microbial proliferation. By leaving to the bacteria the time they needed to multiply, a bacterial culture could soon be obtained that was nearly pure. The only thing then left to do was to inject a drop into an animal and demonstrate that such inoculation was as lethal as the anthrax-infected blood.

In the summer of 1878 the Ministry of Agriculture gave him a new assignment. He was to carry out a survey among cattle producers to find out how anthrax invaded the herds. Pasteur approached the problem using two clearly observed facts: the disease was transmitted by bacteria, and it depended on the grazing zone. Once again, proof involved field observation. Pasteur noticed that sharp, cutting leaves or barley beard caused abrasions in the animals' mouths. His conclusion was that the disease inoculation occurred when the cow or sheep cut its mouth or when it swallowed contaminated herbage.

But there was an outstanding question: How do anthrax spores rise to the surface when the dead animals have been buried deeply underground? In a flash of genius, Pasteur found the missing link inPage 1745  |  Top of Article his anthrax transmission chain. "The worms are the carriers of the spore. As they dig galleries underground, they move near the animal graves, then transport and spread the spores."

For Pasteur, prevention was still the main therapy. Vaccination was soon to become one of the main concerns of his research.

Pasteur felt it would be possible to find a method of protection against each and every microbial strain. With the help of Émile Roux, in 1880, he applied his theory to chicken cholera. After a partly accidental discovery, Pasteur prepared a bacillus culture with attenuated virulence, which therefore offered protection against the fatal infection. Pasteur thus added a genuine biological reagent to Lister's antiseptic techniques. Such attenuated germs were not pathogenic but instead, acted as reagents to prevent the disease induced by virulent ones. It did not cause the disease but became a weapon to stimulate natural resistance.

By using the word vaccinate to mean inoculating the germ of attenuated virulence, Pasteur showed how much he owed to his predecessors, first and foremost the English physician Edward Jenner. However, Pasteurian vaccination is very different from Jenner's method of using a cow's udder because it includes biological experiments. Pasteur discovered the vaccine, not the vaccination. Indeed Jenner proposed a method to vaccinate against smallpox, but did not know how to make a vaccine. Pasteur did not discover the principle but instead described procedures to make vaccines, which, since then, have been applied with success.

Pasteur applied the vaccine to cattle diseases, chicken cholera, hog erysipelas, anthrax, and, although he used a different principle, to human rabies. These results automatically led the way to other vaccines, which were developed thereafter for numerous infectious diseases by many men and women of science and industry.

Pasteur's contribution to public health, from the rules of hygiene to knowledge of germs and the development of vaccines, was not limited to scientific experimentation. Pasteur wanted to apply his ideas himself. The need for a place to combine instruction and industry became clear and led to the opening of the Pasteur Institute on 14 November 1888. He was also desirous of having his research findings serve the most underprivileged countries, and several other Pasteur Institutes were funded overseas from Asia to Africa.

When he died in 1895, Pasteur was judged one of humanity's most important scientists. By opening the way to the rational analysis of the elements of disease prevention, he changed the lives of people around the globe.