Between 1976 and 1983, Argentina was governed by a repressive military dictatorship. This government considered students, intellectuals, and politicians as dissidents and the dictatorial government severely censored and brutalized members of these groups. An estimated 30,000 people were kidnapped, tortured, and killed during these years. Because of these atrocities, the time period is often referred to as the "Dirty War." After people marked as dissidents were kidnapped from their homes, the government usually denied any information regarding their whereabouts; as such, the murdered people were referred to as "the disappeared."

A particular aspect of the terror involved kidnapping pregnant women and taking them to secret detention centers where they were held until they had their babies. After giving birth, the mothers were killed and the babies were given to families that wanted children and that had close ties to the government. The children of people deemed subversive by the government were also kidnapped. Approximately 220 babies were raised in adopted homes as a result of these brutal practices.

In 1977, a group of mothers and grandmothers of disappeared children began demonstrating in the Plaza de Mayo, which houses the capital building in Buenos Aires. Their peaceful march around the Plaza de Mayo with white headscarves eventually brought the attention of international aid groups, as well as reporters and journalists. This group became known as the grandmothers of the Plaza del Mayo (Abuelas de Plaza de Mayo). Although many of them believed that the government had killed their children, they hoped that their efforts would help them locate grandchildren.

In 1980, one of the Abuelas read an article describing a method for determining family relationships using biochemical markers on blood cells. She speculated that it might be possible to develop a test to prove that the Abuelas were the grandparents of children who had been adopted during the dirty war. They eventually enlisted the help of Mary-Claire King, an American geneticist from the University of California, Berkeley. King, in collaboration with Argentinean geneticist Ana Maria Di Lonardo, developed genetic tests to identify grandchildren of some of the Abuelas.

Political pressures removed the military government from power in 1983 and the newly elected president established a commission to investigate the fates of the disappeared and to prosecute those who committed crimes under the dictatorship. Part of the commission provided a structure for any children who were adopted under suspicious conditions during the period of the military government to have his or her DNA checked with the National Genetic Data Bank, which was run by Ana Maria Di Lonardo for the purpose of providing genetic identification for Argentinean citizens.

Four different types of genetic tests were developed that allowed grandparents to identify their grandchildren: HLA typing, Y-chromosome analysis, mitochondrial DNA analysis, and autosomal STR (short tandem repeat) analysis. HLA typing, or histocompatibility typing, was developed in the late 1980's and it was the original test used by King and Di Lonardo. HLA typing relies on identifying the genes that code for special molecules called antigens that are found on the surface of white blood cells. Since the Y-chromosome is inherited from the father, Y-chromosome analysis is used to determine paternity, or in the case of the children of the disappeared, grandpaternity. Mitochondrial DNA is inherited strictly from the mother, so mitochondrial DNA analysis is used to determine the identity of a mother or maternal grandmother. Autosomal STR analysis involves studying specific regions on the DNA found in the nucleus of a person's cells. These regions contain large numbers of repeating nucleotides, which are the building blocks of DNA. These repeating sequences are usually between two and five nucleotides long, and STR analysis often focuses on Page 208  |  Top of Article 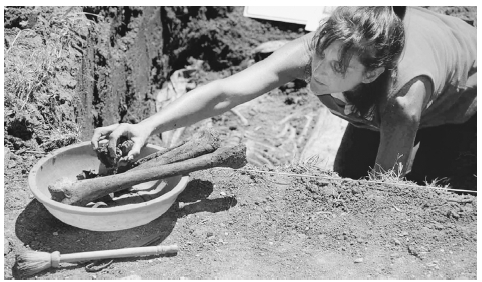 Argentine forensic anthropologists exhume bones in 2002. The bones are suspected of belonging to children considered missing during Argentina's Dirty War dictatorship of the 1970s. © REUTERS/CORBIS tetramers, which are four nucleotides long. The number of times these tetramers are repeated in a specific location on a chromosome will vary from person to person and will be inherited from a parent or a grandparent. Thus, the number of short tandem repeats in a certain location on a chromosome can be used to identify familial relationships.

As of 1996, 175 families and 2100 people provided genetic samples to the National Genetic Data Bank. Legislation passed in 1997 invalidated these adoptions and provided access to adoption records for these children. In all cases where identity of adoptive children was established, the courts considered the best interest of the child. In some cases, children remained with their adopted families; in others they returned to live with their grandparents, and in some cases the biological family was integrated into the life of the adopted family. By 2002, genetic tests proved the identities of 59 children who had been kidnapped and adopted during the military rule; 31 of the children were returned to their biological families.