By: The Associated Press

About the Photographer: Founded in 1848, the Associated Press claims to be the oldest and largest news organization in the world, serving as a news source for more than one billion people a day.

Foreign intrigue had long been the rallying call for those unhappy with the regime of the Iranian Shah, Reza Mohammed Pahlavi, and even one that the Shah had himself used to invoke sympathy amongst his deeply unhappy people during his final days. His father, Reza Shah, owed both his installation as the first monarch of the Pahlavi dynasty in 1921, and his deposition in 1941 to the machinations of foreign powers. Likewise, Reza Mohammed's accession in 1953 came as part of a Central Intelligence Agency-backed coup and was merely seen by the Iranian people as a continuation of foreign intrigues.

Reza Mohammad Pahlavi was America's closest ally in the Middle East during the 1960s and 1970s. His goal was to build up Iran to be a Western-orientated regional superpower with the latest military technology and modern communications. The Shah positioned himself closely to Western leaders, in particular United States President Jimmy Carter. As recession and social unrest began to threaten his position from 1977 onwards, these ties increasingly became a liability and the Shah started to turn against his Western backers, accusing the CIA of plotting to overthrow him and the British Broadcasting Corporation (BBC) of spreading incendiary broadcasts via its World Service. Given his earlier allegiances, an increasingly enraged population began to grip the country with demonstrations throughout 1978. A social and religious opposition combined to topple the Shah's regime, and he fled Iran in January 1979.

This abandonment led to a power vacuum in Iran, with organizations from the political left to the far right beginning to contest for power. This was inflamed by a struggle between secular and religious forces. The only individual capable of providing any sort of national unity, and even that was tentative, was Ayatollah Khomeini, a senior cleric and long-standing opponent of the Shah's regime who had been living in exile in France. Khomeini made a triumphant return to Iran in February 1979.

Even Khomeini, however, could not claim control of the revolutionary situation. Khomeini refused to recognize any officials or politicians who accepted an appointment from the Shah, regarding them as traitors to Islam. During 1979, state, army, and internal security forces all collapsed along with the economy. Khomeini installed his own Prime Minister, Medhi Bazargan, a moderate, but even his powers were limited by the authority invested in a parallel ruling organization known as the Council of the Islamic Republic, a body of clerics headed by Khomeini, which vetoed policies that it did not like.

This merely added to a prevailing sense of chaos, leaving Khomeini to rule by religious authority. He also advanced his support by blaming Iran's mess on American and Israeli interests. Khomeini denounced the American government as the "Great Satan" and caused chaos across the Moslem World in November and early December 1979 after (falsely) accusing the CIA of bombing the Grand Mosque in Mecca. This precipitated the destruction of the American embassies in Pakistan and Libya after widespread rioting.

The Shah, meanwhile, was terminally ill with lymphoma and living in Egypt. In October 1979, he was admitted to the United States for medical treatment. This merely enraged the revolutionary movement in Iran further, and on November 1, Ayatollah Khomeini urged the Iranian people to demonstrate against the United States. Thousands gathered around the U.S. embassy in Tehran in protest, a not uncommon occurrence. However, these demonstrations became increasingly violent and on November 4, a mob of around 500 Iranians students calling themselves the Imam's Disciples seized the main embassy building. A guard of Marines was completely outnumbered and of ninety occupants in the building, sixty-six were taken captive.

The revolutionaries justified their action as retaliation against years of American support for the Shah and for his admission into the United States for medical treatment. They demanded the Shah be returned to Iran for trial in exchange for the hostage's release. Khomeini's government gave backing to the hostage takers, and as news spread, the Arab world gloried in the act as a demonstration that the new Iranian government was capable of opposing the United States.

President Carter retaliated by applying economic and diplomatic sanctions on Iran, freezing around $8 billion of Iranian assets on November 14, 1979.

Khomeini, however, was unrepentant and merely used the sanctions as the latest example of the United States acting against the interests of the Iranian people. Although thirteen hostages were released on November 19 and 20, fifty-three continued to be held, and, as Christmas passed, it became apparent that a solution to the crisis would be far more complicated than first anticipated.

In February 1980, Khomeini's government issued a set of demands in return for the hostages, which included the return of the Shah to Iran for trial, and an array of diplomatic gestures, including an apology for previous American actions in Iran, such as the 1953 coup, and a promise not to interfere in the future. Inevitably, Carter refused to meet these conditions, but he did try and seek a diplomatic solution to the crisis via neutral third-party governments, most notably Switzerland.

Carter also ordered a secret rescue mission code-named Operation Eagle Claw in April 1980. The mission ended in disaster when one of the rescue helicopters crashed, killing eight U.S. servicemen. Intelligence material was left behind for the Iranians to discover, and no hostages were rescued. In images broadcast world wide, the Iranians displayed the intelligence material along with the bodies of the dead servicemen, which were paraded through the streets of Tehran.

1980 was an election year in the United States, and Carter's presidential rival, Ronald Reagan, continually 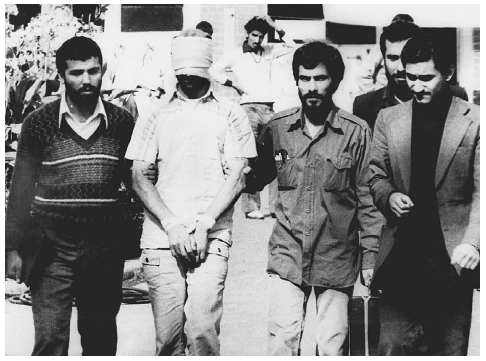 PRIMARY SOURCE: Americans Held Hostage in Iran A bound and blindfolded American hostage is displayed to the crowd outside the U.S. Embassy in Tehran, November 9, 1979. AP/WIDE WORLD PHOTOS Page 190  |  Top of Article exploited the fact that President Carter was unable to bring a satisfactory conclusion to the hostage crisis. Not even the death of the Shah on July 27, 1980, which removed one of Khomeini's main demands, seemed to ease matters. Only when Iraq invaded Iran in September was Khomeini's regime any more receptive to resolving the crisis. Negotiations continued behind the scenes, but no solution was forthcoming ahead of the November elections, which Ronald Reagan (1981–1989) won. In the final days of Carter's presidency and with the assistance of intermediaries, such as the Algerian government, successful negotiations were undertaken between the United States and Iran. In exchange for the unfreezing of $8 billion Iranian assets and immunity from lawsuits, the hostages were formally released into U.S. custody, minutes after President Reagan's inauguration on January 20, 1981.

Throughout his Presidency, Reagan railed against the Iranians, describing them as part of a "confederation of terrorist states." It was well established that Iran was a sponsor of the Shi'ite extremist group Hezbollah, which carried out a number of terrorist attacks against the U.S. in Lebanon. Iran was also linked to other Shi'ite extremists, most notably Islamic Jihad.

As a way of toppling Khomeini, Reagan began providing military aid to Iraq, who were engaged in a bloody war with Iran, passing on weaponry, intelligence, and military secrets. The Reagan administration also passed on arms to Iran—in what became known as the Iran Contra Affair—in 1985–1986 as part of their efforts to release U.S. hostages held by Hezbollah in Lebanon.

The Iran-Iraq war went on until 1988, before reaching an impasse. It is a matter of debate whether military aid from the Reagan administration unnecessarily prolonged that conflict. However, the war claimed more than a million lives and had devastating economic consequences for both countries. Ayatollah Khomeini died in June 1989. His death triggered mass outpourings of grief in Iran and marked the onset of a sustained period of political uncertainty within the country. Clerics and democratically elected politicians vied with each other for control of government; one side trying to rebuild bridges with the West, the other doing their utmost to pull them back down. In many ways, this situation extends to the present day.

In 2002, George W. Bush described Iran as being part of "an axis of evil" along with Iraq and North Korea, inferring that it was a rogue state that harbored terrorists and sponsored terrorism. In June 2005, the hard-liner Mahmoud Ahmadinejad defeated the moderate Akbar Rafsanjhani in Iran's presidential elections. Hopes that the détente which had passed between the European Union and Iran over previous years would be mirrored by an improvement in relations with the United States were seemingly dashed by the election of a man whose criticism of America was among the central tenets of his victorious campaign.