Feminism: The Fight for Suffrage

FEMINISM: THE FIGHT FOR SUFFRAGE

The United States achieved universal male suffrage in 1870 with passage of the Fifteenth Amendment. Women, however, had to educate, agitate, and organize for another fifty years before they obtained the right to vote in federal elections. On 4 June 1919 Congress passed the Nineteenth Amendment, granting women suffrage, and by August 1920 the requisite number of states had ratified it. It had been a long fight, with roots that can be traced back to Abigail Adams's importuning her husband, John Adams, to "remember the ladies" during the Constitutional Convention. Woman's suffrage was proposed at the 1848 Seneca Falls convention, but the drive to achieve it did not begin in earnest until 1869 with the founding of the National Woman Suffrage Association (NWSA) and the American Woman Suffrage Association (AWSA). Susan B. Anthony and Elizabeth Cady Stanton of NWSA focused on national suffrage; Lucy Stone and Julia Ward Howe in AWSA sought state legislation. The merger of NWSA and AWSA into the National American Woman Suffrage Association (NAWSA) in 1890 proved to be an effective combination leading to final victory in 1919.

Between 1896 and 1910 NAWSA initiated scores of campaigns at the state level calling for referenda on the issue of votes for women, but in the few cases in which referenda were held, none resulted in votes for women. Beginning in 1910, however, under the aggressive leadership of Carrie Chapman Catt, a growing roster of states changed their laws to grant women the vote in state elections. Washington State (1910), California (1911), Arizona (1912), Kansas (1912), Oregon (1912), Illinois (1913), Nevada (1914), Montana (1914), and New York (1917) joined Wyoming, Colorado, Utah, and Idaho, which had granted woman suffrage in the late nineteenth century.

In 1910 NAWSA claimed seventy-five thousand members; by 1917 it had more than two million. In 1912 twenty thousand suffragists paraded down Fifth Avenue in New York City, and when 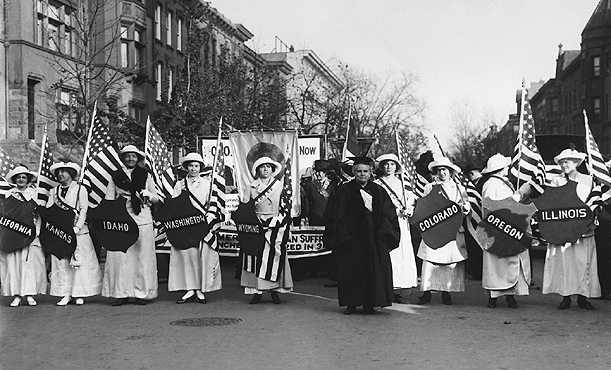 A float in a New York City women's suffrage parade, 1915 © UPI/Corbis-Bettmann. Wilson arrived in Washington, D.C., for his inauguration in 1913, women marched, carrying banners that declared: "We demand an amendment to the constitution of the United States enfranchising the women of the country." In 1913 Alice Paul, a militant young leader of the movement, left NAWSA and created the Congressional Union, which became the Woman's Party in 1916. Soon after its founding it boasted fifty thousand active members. The Woman's Party picketed the White House and Congress. They especially targeted President Wilson because of his refusal to voice public support for their cause. Beginning in January 1917, the Woman's Party had a perpetual picket stationed outside the White House for a year and a half, standing or marching in an effort to influence public opinion and the nation's chief executive. During this perpetual picket, as one historian has noted, "Women were spat upon, slapped in the face, tripped up, pelted with burning cigar stubs, and insulted by jeers." Sometimes arrested on the charge of obstructing traffic—though they were not doing so—the suffragists usually chose to serve jail time rather than pay small fines. All told, 168 women spent time in jails for picketing, and several, including Paul, went on hunger strikes while imprisoned. During Paul's three-week hunger strike her jailers resorted to force-feeding her, and when she continued her resistance she was placed in a psychiatric ward for a week. In autumn 1917 President Wilson pardoned the jailed women, but by summer 1918 arrests had begun anew.

A War for Democracy

After Wilson declared that World War I was a war for democracy, women protesters pointed out the limitations of democracy in the United States. When he spoke in public, women from the audience asked, "Mr. President, if you sincerely desire to forward the interests of all the people, why do you oppose the national enfranchisement of women?" On occasions of state, when the president was entertaining foreign dignitaries, members of the Woman's Party displayed banners declaring that the United States was not a democracy. In January 1918 the president capitulated, making a pro-suffrage speech. The following year Congress passed the Nineteenth Amendment, and on 18 August 1920 the floor of the Tennessee House of Representatives in Nashville was flooded with yellow roses (the symbol of the cause) when Henry Thomas Burns, inspired by a letter from his mother, cast the deciding vote in favor of ratification, making Tennessee the thirty-sixth state to pass the amendment and providing the required three-fourths margin necessary for ratification. Burns later said, "I appreciate the fact that an opportunity as does seldom come to a mortal man to free seventeen million from political slavery was mine."