The Fourteenth Amendment to the U.S. Constitution, adopted in 1866, guarantees that no state may "abridge the privileges or immunities of citizens of the United States" nor "deny to any person within its jurisdiction the equal protection of the laws." These words give all Americans, regardless of race, equal rights and equal protection under state and federal laws. Yet at the beginning of the 1950s society was still separated into black and white. Hotels, trains, parks, restaurants, apartment houses, and even state voting precincts were segregated by race through state statutes, called "Jim Crow" laws. African-Americans were criminally prosecuted and jailed for attempting to ride the same trains or eat in the same restaurants as whites. 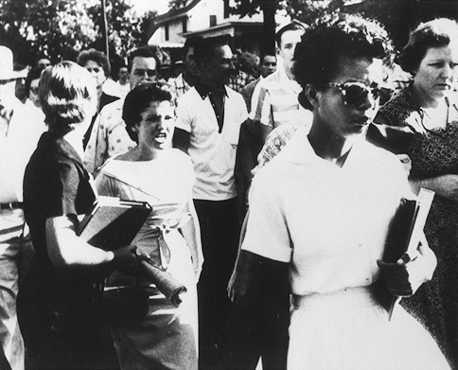 Elizabeth Echford walks to Little Rock High School with a crowd behin her in September 1957, shortly after the Supreme Court ruled in favor of desegregation. AP/Wide World Photos. Reproduced by permission.

The constitutionality of these state laws was first considered by the Supreme Court in Plessy v. Ferguson (1896). Homer Plessy was an African-American who attempted to ride in a whites-only railroad car in Louisiana. Plessy was charged with violating Louisiana's Jim Crow law, and he argued all the way to the Supreme Court that the law was unconstitutional. In a seven-to-one vote, the 1896 Court declared that the amendment did not prohibit state laws from treating people differently according to the color of their skins as long as that treatment was "equal." The "separate but equal" doctrine created by the Plessy decision lasted for nearly sixty years, until the 1954 decision of Brown v. Board of Education.

The Brown case began in Topeka, Kansas, at the beginning of the 1950 school year, when Oliver Brown was told that his eight-year-old daughter Linda could not attend the neighborhood elementary school four blocks from their home. The principal of the school explained to Brown that Kansas law required African-Americans to attend segregated schools. Brown joined with other African-American families to protest the law and engaged the National Association for the Advancement of Colored People to argue their cause. They started a lawsuit against the board of education of Topeka, claiming that segregation violated their children's constitutional rights under the Fourteenth Amendment. For four years they lost their case, appealing it to progressively higher courts. In 1954 Brown v. Board of Education reached the U.S. Supreme Court along with three other similar cases.

Separate Is Not Equal

The plaintiffs' attorney, Thurgood Marshall, later a Supreme Court justice, argued that racially segregated public schools were not "equal" and could not be made "equal"; therefore the laws were in violation of the Fourteenth Amendment. He claimed that the only way for the Court to uphold segregation in 1954 was "to find that for some reason Negroes are inferior to all other human beings." The Supreme Court agreed and unanimously rejected the "separate but equal" doctrine of Plessy v. Ferguson. Chief Justice Earl Warren, writing the opinion of the Court, highlighted the fundamental importance of education to American children. He then stated unequivocally that segregation of public schools based solely on race deprives minority children of the values of education. In conclusion the opinion read, "in the field of public education the doctrine of 'separate but equal' has no place."

While deciding the landmark Brown v. Board of Education case the Supreme Court heard arguments from a lawyer who would one day be a justice himself: Thurgood Marshall. In 1954 Marshall was no stranger to the men of the high court. As a lawyer for the National Association for the Advancement of Colored People, he had argued cases before the Court for ten years, starting with the appeal of W. D. Lyons, a young man unfairly convicted of murder, in 1944. The Lyons case was one of the few that Marshall lost: he eventually won twenty-nine out of the thirty-two cases he represented.

The Brown decision was one of his most significant victories. As Marshall biographer Carl Rowan wrote, "There may never have been any days of oral argument before the Supreme Court to equal the depth of passion, the agony of the justices, that erupted in this Brown case." Certainly there had been few cases before the Court with such enormous social implications. With characteristic frankness Marshall urged the justices to make a decent decision.

"I got the feeling on hearing the discussion yesterday that when you put a white child in a school with a whole lot of colored children, the child would fall apart or something," Marshall asserted. "Everybody knows that is not true. Those same kids in Virginia and South Carolina—and I have seen them do it—they play in the streets together, they play on the farms together, they separate to go to school, they come out of school and play ball together. They have to be separated in school.… Why, of all the multitudinous groups of people in the country, [do] you have to single out the Negroes and give them this separate treatment? …

"The only thing it can be is an inherent determination that the people who were formerly in slavery, regardless of anything else, shall be kept as near that stage as possible. And now is the time, we submit, that this Court should make clear that this is not what our Constitution stands for."

The Brown decision hit the country like a bombshell. Reversing segregation was not going to come easily, and the Court realized the tremendous resistance local politicians and school boards would have to its decision. Therefore the Brown decision called for a reargument on the issue of how to bring about the constitutional mandate of desegregation. The following year, in Brown II, the Warren Court charged local federal district courts with the task of assessing local obstacles to integration and deciding whether local school boards were implementing good-faith attempts at desegregation. The nation's public schools were ordered to desegregate "with all deliberate speed."

The judicial branch of the government, however, can only pronounce the law. It is up to the executive branch, led by the president, to enforce it. Federal district courts did their best to make local school boards conform to the "all deliberate speed" mandate, but their orders and injunctions had little effect. Desegregation was extremely unpopular, and many states threatened to close their public schools rather than allow them to become integrated. Attempts by African-American students to follow court-ordered integration resulted in riots in cities such as Milford, Delaware; Mansfield, Texas; Clinton, Tennessee; and New Orleans, Louisiana. President Dwight D. Eisenhower, who believed that the Court had attempted to force the nation to integrate too quickly, offered no help. For several years after the Brown decision, very little was done on local levels to proceed toward desegregation. Nevertheless, African-Americans continued to push for their rights.

The situation came to a head in Little Rock, Arkansas. In a halfhearted attempt to follow the federal court order, in 1957 the Little Rock school board initiated a plan to integrate the public schools one grade at a time, starting with the twelfth grade in 1959. African-American families and the NAACP saw this move as much too slow. They took their case back to federal court and won an order allowing nine African-American students to enter Little Rock's Central High School for the fall semester. Under the direction of Arkansas governor Orval Faubus, however, armed troops from the Arkansas National Guard blocked the entrance of the school from the nine students. This situation continued for three weeks until newspapers across the country showed a picture of fifteen-year-old Elizabeth Eckford turned away from the school, with guardsmen and white students screaming insults at her. President Eisenhower could not delay enforcing citizen's rights any longer. He sent one thousand air force paratroopers to Little Rock, where they surrounded the school. Amid three small armies—federal, state, and the news media—nine African-American students began their first day of high school at Little Rock Central.

Lawyers for the school board argued that after the Little Rock incident public hostility was so extreme and severe that it was impossible to run a sound educational program. The board's case, Cooper v. Aaron, quickly reached the Supreme Court. On 12 September 1958 the Court denounced Arkansas's position in a unanimous and resounding decision. Writing for the Court, Justice William Brennan dismissed an anti-integration amendment Arkansas had added to its constitution, stating that "the federal judiciary is supreme in the exposition of the law of the Constitution and that principle [is] a permanent and indispensable feature of our constitutional system." He reaffirmed the Court's reversal of the "separate but equal" doctrine of 1896. The principles of the Brown case, Brennan wrote, "are indispensable for the protection of the freedoms guaranteed by the fundamental charter for all of us. Our constitutional idea of equal justice under law is thus made a living truth." After the Cooper decision no state could again argue that segregation was constitutional.