The Freedom Rides were conceived by the Congress of Racial Equality (CORE) in 1961 as the next step in protesting the segregated businesses of the southern states, encouraged by the success that the previous year's sit-in movement had in getting whites-only lunch counters to serve African-Americans. The goal of the rides was to compel the newly appointed Kennedy administration to enforce the 1960 U.S. Supreme Court ruling that made segregation of bus terminals and stations serving interstate travelers unconstitutional. Without an order of compliance from the Interstate Commerce Commission, an executive agency that was under President Kennedy's authority, southern states would simply ignore the ruling. Civil rights leaders feared, However, that federal enforcement would be slow in coming if at all, since it could cost the president the support of southern Democrats. As James Farmer, executive director of CORE, recalled, "What we had to do was to make it more dangerous politically for the federal government not to enforce federal law than it would be for them to enforce federal law." 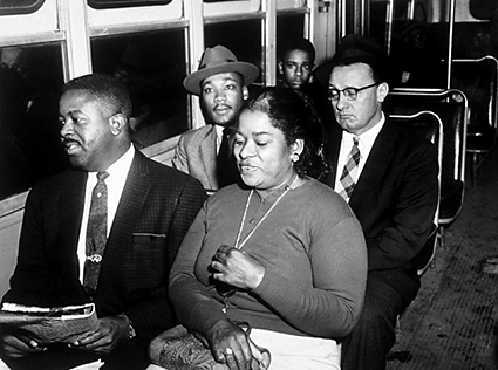 CORE selected thirteen people, black and white, for the first ride. The white riders would sit in the back of the bus, the black riders in front. At every rest stop the blacks attempted to use all the segregated facilities in the stations. The riders they picked were trained and experienced civil rights activists, including several young veterans of the recent sit-ins. As with the sit-ins, the protest would be nonviolent. They would simply be doing what the Supreme Court had ruled was their right to do. They counted on local racists to respond violently, and thus they hoped to force the federal government's hand. Told that the segregationists intended to hold the line on the question of interstate travel, the Freedom Riders steeled themselves for the worst. Some left behind letters for their loved ones should they not survive.

The Freedom Rides began on 4 May from Washington, D.C.; their route would take the buses through Virginia and the Carolinas, into Georgia and Alabama, and end in New Orleans, Louisiana, on the anniversary of Brown v. Board of Education, the landmark Supreme Court ruling that reversed the legal basis for school segregation, Having made it to Atlanta with only minor incidents, the riders split into two groups for the next leg of the trip, to Birmingham. That was as far as either bus got. One was met by an angry mob of some two hundred people in Anniston, Alabama, who stoned the riders and slashed the bus's tires. The bus escaped but had to stop outside of town to have a flat tire fixed. When it did, the mob caught up with it again, and someone threw a firebomb inside. The riders barely managed to escape before the bus burst into flames.

The other bus reached Birmingham, where it, too, was met by a mob. The city's public safety commissioner claimed that he had not ordered any police on the scene because of the Mother's Day holiday. No one was on hand to protect the riders from the brutal assault which followed. One of the riders was crippled for life. John Patterson, the governor of Alabama, told the press after the attack, "When you go somewhere looking for trouble, you usually find it." Fearing for their safety, the riders managed to reach the Birmingham airport and flew to New Orleans. Over the next several days the violence against the Freedom Riders gained international press coverage; this made it especially important to the Freedom Riders that they not back down from the segregationists' brutality. Ten students, eight black and two white, decided to return to Birmingham and finish the Freedom Ride.

Finding a bus line that would carry them or a driver who would consent to put his life in jeopardy proved to be difficult. The students waited in Birmingham while Attorney General Robert Kennedy, the president's brother, attempted to negotiate with the Birmingham police and the Greyhound bus company to ensure the riders' safe passage from the city. On 17 May, the day they had originally been scheduled to reach New Orleans, the riders were jailed, supposedly for their own protection. They went on a hunger strike the next day, and on 19 May they were taken to the Tennessee state line and left by the side of the highway. Securing transportation from fellow CORE members in Nashville, they immediately returned to Birmingham and attempted to buy bus tickets for Montgomery. That same day, John Siegenthaler, an aide to the attorney general, made it clear to Governor Patterson that the federal government would use whatever force was necessary to protect the riders if Alabama refused.

With assurances that Alabama state police would protect them, a group of twenty-one Freedom Riders left for Montgomery on 20 May. But at the Montgomery city limits—where city police were supposed to take over—the protection ended. The bus terminal at Montgomery seemed almost abandoned; then a mob materialized seemingly out of nowhere. The riders were beaten viciously; Siegenthaler was knocked unconscious when he tried to help a young woman rider. The state police were called in but were too late to prevent the riot. Furious that Governor Patterson had broken his promise, Robert Kennedy immediately ordered six hundred federal marshals to an air force base just outside Montgomery. Martin Luther King, Jr., came to Montgomery as well to address a rally supporting the Freedom Rides. As he spoke at Montgomery's First Baptist Church, several thousand angry whites squared off against two hundred U.S. marshals outside. The marshals used tear gas on the mob, some of which seeped inside the church. Only the intervention of the Alabama state police averted a disastrous confrontation.

The state of Alabama and the Kennedy administration hoped that the Freedom Rides would stop at least temporarily so that racial tensions might have a chance to subside. The Freedom Riders were intent on continuing; twenty-seven of them left on two buses for Jackson, Mississippi, two days after the riot at First Baptist Church. When they reached the Mississippi state line, members of the state's national guard lined both sides of the highway. The Kennedy administration had promised that no federal troops would be sent to the state if state leaders would guarantee no replays of Alabama's violence. The Freedom Riders were relieved and sang as they arrived at the Jackson bus station. There the police escorted them into the whites-only station and out the other side. They were arrested for trespassing and taken to jail. As had been the case when sit-in participants in Tennessee were arrested, the judge turned and looked at the wall rather than listening to the Freedom Riders' defense. They were sentenced to thirty days in the state penitentiary.

Through the rest of the summer hundreds of Freedom Riders traveled the Deep South in the effort to integrate interstate bus travel. Finally, in September the rides and the mass arrests that had followed had the desired effect. The Interstate Commerce Commission, responding to a petition by Attorney General Kennedy, drew up a set of guidelines governing the integration of all interstate bus terminals. The crisis atmosphere subsided as the focus of civil rights activism began to change to efforts to register African-Americans to vote, so that they could support the movement with their ballots. Still, workers for civil rights in the South were known by local blacks as freedom riders. As Juan Williams writes, "The courage and tenacity of those pioneers had captured the imagination and awe of blacks throughout the Southland."