"Western Types: The Cow-boy and
The Half-breed"

"A Few Words From Mr. Remington"

About the Artist: Frederic Remington (1861–1909) was a painter, illustrator, and sculptor famous for his romantic depictions of the Old West. He created archetypal images of cowboys, soldiers, and American Indians. Remington was born in upstate New York. Although he never actually lived in the West, he made frequent trips there—taking photographs and gathering props to enable him to work from his studio. He was also a popular writer, even publishing a best-selling novel, John Ermine of the Yellowstone (1902).

Remington made his first trip to the West in 1881, vacationing in the Montana Territory. In 1883, he used his inheritance to buy a sheep ranch in Kansas. He also invested in a hardware store, and then a saloon. Each of these ventures failed. Broke, Remington returned east in 1885, settling in Brooklyn, New York, where he studied drawing at the Art Students League. He continued to take summer trips throughout the Americas, including Arizona, Mexico, North Dakota, Wyoming, and Western Canada. To support himself, Remington sold his Western sketches to high-paying magazines. His work began to appear in major publications of the day, including Scribner's, Harper's Weekly, Century, Collier's, and Boys' Life. He created reporting missions for himself, providing both the text and illustrations for articles. In 1888, Remington began illustrating Theodore Roosevelt's serialized great-outdoors articles for Century Magazine. Although Remington's primary interest was Western imagery, he drew other subjects as well. He was a war correspondent, and traveled to Cuba to cover the Spanish-American War (1898) for Harper's and the New York Journal.

Remington's popularity peaked at the beginning of the twentieth century, his work seen by hundreds of thousands of Americans. His art reflected an era that glorified the strenuous life and the cultivation of personal character, an attitude appealing to turn-of-the-century Americans. This gave Remington's work tremendous popular appeal. When Harper's released him due to financial constraints, Remington defected to Collier's in 1903. Collier's even placed a large advertisement in Harper's to announce Remington's change in publishers.

Remington had a great influence on the look of future Western movies; John Ford's 1949 film She Wore a Yellow Ribbon was inspired directly by Remington's work.

Even a century later, Remington still is considered the premier illustrator of Western lore. Less well-known is his successful, secondary career as a writer. His magazine articles were so widely acclaimed that they were collected and published as books. Remington wrote short fiction and novels, including Pony Tracks (1895), Stories 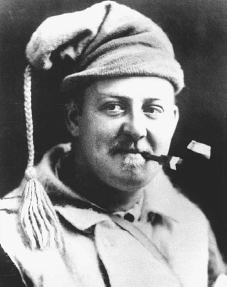 Artist and author Frederic Remington, best known for his romantic depictions of the Old West. © CORBIS. REPRODUCED BY PERMISSION. of Peace and War (1899), and The Way of an Indian (1906). Remington published his best-selling novel John Ermine of the Yellowstone in the same year that his friend Owen Wister's The Virginians (1902) appeared. Remington would come to immortalize the Old West through visual representations, while Wister would be the one to do so with language.

Magazines were ideal for gaining exposure for Remington's art. But Remington bristled at criticism from other artists who maintained that he was merely an illustrator, rather than a painter. A member of the National Academy pointed out that to Remington, "the subject is more to him than the purely artistic qualities." It was true, on close inspection, that some of Remington's many drawings were not always so believable. In "Bringing Home the New Cook," chaotic image of horses in action, seen by thousands of Americans when it was published as a full-color feature in Collier's, Remington himself later admitted that one of the horse's legs was impossibly bunched.

After 1902, Remington gave up writing to devote himself full-time to painting and sculpture. However, he agreed to submit an essay to the all-Remington issue of Collier's Magazine on March 18, 1905. This tribute represented an artistic triumph, and it provided a Page 14  |  Top of Article 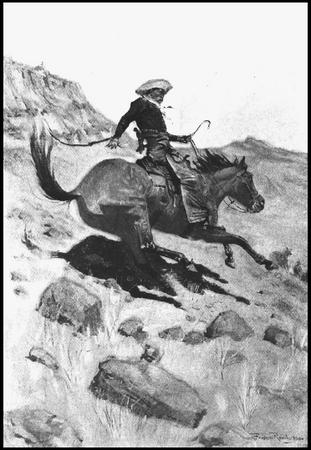 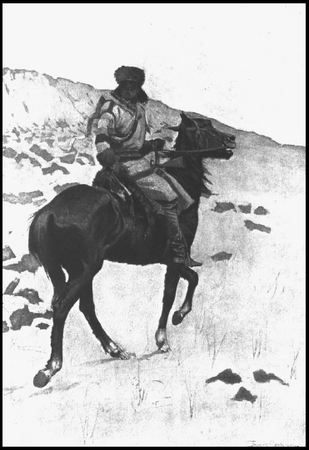 Primary Source: "Western Types": The Half-breed (2 OF 2) Page 16  |  Top of Article major opportunity for the artist to express himself in prose again. In "A Few Words From Mr. Remington," the artist eloquently describes how his boyhood fascination with the West led to a lifelong career in illustration. Although he loved writing, Remington's personal vision of the disappearing frontier truly was expressed best by his visual work. Dedicated to Remington's art and life story, the magazine's pages included several full-color reproductions of his paintings and photographs of his bronze sculptures of bucking broncos, previously unseen by most readers.

SYNOPSIS: Remington created the artwork for his black and white magazine illustrations using pen and ink, ink wash and gouache, or black and white oil. The drawings then were reproduced as photoengravings—a common photomechanical process where the subject is photographed, and the image is recorded on a metal plate specially treated with a resist. The plate is dipped in an acid bath to create an etching of the image, and the plate may then be used on a printing press. It was an ideal method for reproducing Remington's illustrations, as it produced subtle tonal gradations and a velvety, tactile quality.

From behind the breastworks of his big desk the editor is banging at me to write about myself. I find the thought very chilly out here in the garish light, but his last shot says, "If you don't, I will send a person to interview you, and he will probably misquote you." Quite so—one doesn't need that character of help when about to play the fool; so if you find the going heavy, gentle reader, camp here.

I had brought more than ordinary schoolboy enthusiasm to Catlin, Irving, Gregg, Lewis and Clark, and others on their shelf, and youth found me sweating along their tracks. I was in the grand silent country following my own inclinations, but there was a heavy feel in the atmosphere. I did not immediately see what it portended, but it gradually obtruded itself. The times had changed.

Evening overtook me one night in Montana, and I by good luck made the campfire of an old wagon freighter who shared his bacon and coffee with me. I was nineteen years of age and he was a very old man. Over the pipes he developed that he was born in Western New York and had gone West at an early age. His West was Iowa. Thence during his long life he had followed the receding frontiers, always further and further West. "And now," said he, "there is no more West. In a few years the railroad will come along the Yellowstone and a poor man can not make a living at all."

There he was, my friend of the open, sleeping in a blanket on the ground (it snowed that night), eating his own villanies out of his frying-pan, wearing a cotton shirt open at the throat, and hunting his horses through the bleak hills before daylight; and all for enough money to mend harness and buy wagon grease. He had his point of view and he made a new one for me.

The old man had closed my very entrancing book almost at the first chapter. I knew the railroad was coming—I saw men already swarming into the land. I knew the derby hat, the smoking chimneys, the cord-binder, and the thirty-day note were upon us in a resistless surge. I knew the wild riders and the vacant land were about to vanish forever, and the more I considered the subject the bigger the Forever loomed.

Without knowing exactly how to do it, I began to try to record some facts around me, and the more I looked the more the panorama unfolded. Youth is never appalled by the insistent demands of a great profession, because it is mostly unconscious of their existence. Time unfolds these abruptly enough. Art is a she-devil of a mistress, and, if at times in earlier days she would not even stoop to my way of thinking, I have persevered and will so continue. Some day, who knows, she may let me tell you some of my secrets. Meanwhile be patient, and if the recording of a day which is past infringes on the increasing interest of the present, be assured there are those who will set this down in turn and everything will be right in the end. Besides, artists must follow their own inclinations unreservedly. It's more a matter of heart than head, with nothing perfunctory about it. I saw the living, breathing end of three American centuries of smoke and dust and sweat, and I now see quite another thing where it all took place, but it does not appeal to me.