Charles Darwin (1809–1882) was a natural scientist who proposed the idea of natural selection as the force that drives the appearance and disappearance of new species. His work formed the basis of the scientific theory of evolution, now the foundation of the discipline of biology.

Travels around the World

Darwin was born on February 12, 1809, in Shrewsbury, England. His father was a doctor and his grandfather a botanist. Darwin himself grew up exploring the landscape around his home. He attended universities in Edinburgh, Scotland, and Cambridge, England, specializing in natural history, the study of the natural world. 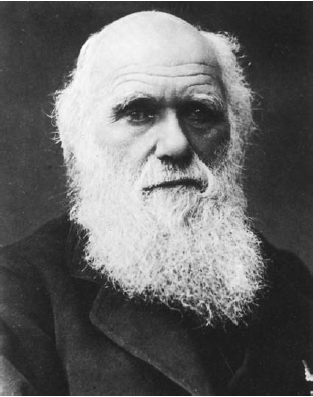 Charles Darwin’s ideas about natural selection formed the basis for the theory of evolution, which purports that the inherited characteristics of a biological population change over time. © PICTORIAL PRESS LTD/ALAMY.

After Darwin graduated from Cambridge in 1831, he took a job on a voyage of exploration around the world on a ship called the HMS Beagle. Darwin was hired to be the ship’s naturalist, responsible for collecting plants, animals, and fossils and describing the natural world he observed. This trip lasted five years and visited South America, the Galápagos Islands, and the islands of the Pacific.

After returning to England in 1836, Darwin began publishing his findings and discussing his specimens with experts on birds and plants. He spent the next two decades pondering what he had seen on his voyage around the world. He had noticed that everywhere he went species were similar, but that animals and plants varied somewhat based on location. The Galápagos Islands were particularly intriguing to him. Similar animals appeared throughout the islands, but every island had its own distinct types. He concluded that the similarities must be due to species sharing similar ancestors, and the differences were due to different survival rates. These different survival rates he attributed to “natural selection,” a process in which individuals best suited to survive and reproduce do, while those less suited either die or fail to reproduce successfully. The differences between the animals on the Galápagos, for example, were due to different environmental conditions on each island. The same traits would not help an animal succeed everywhere. Animals that developed traits that helped them most were the ones who did the best.

Evolution: Change over time in the inherited characteristics of biological populations.

Natural selection: The process through which biological traits become more or less common depending on whether or not they help organisms survive and reproduce.

Scientific theory: A thoroughly proven explanation for some natural thing or occurrence, something that has been proven by experimentation and evidence so many times that there is virtually no possibility of its being disproven.

In 1858, Darwin announced his new theory to a scientific society. The following year he published a book explaining the theory called On the Origin of Species by Means of Natural Selection. He suggested the following:

Those successful traits will become more common in subsequent generations.

Darwin’s book was tremendously influential. Some scientists embraced Darwin’s ideas and admired the evidence he had used to support his theory. Many had already been thinking such things themselves. Another scientist, Alfred Russel Wallace (1823–1913), independently wrote up a theory of evolution that was nearly identical to Darwin’s around the same time. Many people, however, were horrified at the implication that humans were just one animal species among many, and that humans had evolved through a random natural process.

Since the publication of On the Origin of Species many other scientists have found evidence supporting Darwin’s contentions. The discovery of genetics filled in one of the gaps in Darwin’s own thinking, because Darwin did not know how traits might be passed from one generation to the next. Today evolution is the scientific theory at the basis of the discipline of biology; in this use, a theory is a fact with so much evidence supporting it that it is considered to be true.