As a strategy for social change, consciousness raising can be defined as a form of communication or any activity aimed at increasing people's awareness of specific conditions and/or ways to address them. In the sustainability context, this means raising awareness about social and environmental issues and problems, as well as about sustainable alternatives. For example, consciousness raising can mean educating people about the risks of biocides and the industrial food system as well as promoting local organic agriculture as an alternative. Either way, the purpose is to get the broader public interested in the cause and then engaged in doing something about it. Consciousness raising is thus a crucial first step in solving social problems.

A wide variety of approaches to consciousness raising can be taken. In the 1960s the term referred to a tactic of the early feminist movement. Women would gather in small groups to talk about their experiences of male chauvinism and discrimination and to learn from each other. They raised each other's awareness of what would come to be called sexism and how to deal with it. This was an essential first step in both diagnosing the problem and building a movement to address it.

Around the same time antinuclear protests, such as those of the Don't Make a Wave Committee, which eventually became Greenpeace, served as consciousness-raising events as they flowed through the media to reach mass audiences. Greenpeace has been one of the most effective organizations at bringing people's attention to environmental concerns. One of its founders, the Canadian journalist Robert Hunter, coined the term mind bomb to refer to images that “explode in people's minds” to create awareness. A good example of this is the pictures of Greenpeace protesters in zodiac boats putting themselves in harm's way to try to block the harpoons of Soviet whaling ships.

The first Earth Day event in 1970 was also a major consciousness-raising exercise, incorporating teach-ins, demonstrations, and other activities. Founded by US Senator Gaylord Nelson, Earth Day continues to be celebrated around the world on April 22 every year. Over time it has gradually shifted toward promoting sustainable lifestyles, recycling, tree planting, and other approaches, as spearheaded by the Earth Day Network.

In the twenty-first century, consciousness raising takes many forms, including community art installations, public service announcements shown before films, and door-to-door canvassing. A particularly innovative technique is the “toxic tour.” These sightseeing visits to heavily polluted communities are typically conducted by citizens in the environmental justice movement. They are used to show visitors (the “tourists”) what is happening to the people and ecosystems in these “sacrifice zones,” in order to gain their support in addressing the issues.

One unconventional approach is that of the performer known as Reverend Billy (Bill Talen), a faux American televangelist. He and his Church of Stop Shopping preach the gospel of anticonsumerism, environmental protection, and economic justice through music, film, and street theater. Similarly, political pranksters like The Yes Men engage in consciousness-raising activism through their often outrageous stunts. They use moral frames and what they call “identity correction” (impersonating the organizations they are criticizing) to bring attention to what they see as the injustices brought on by corporations such as Exxon Mobil and Dow Chemical and organizations such as the US Chamber of Commerce and the World Trade Organization (WTO). By using humor and creative activism, Reverend Billy and other culture-jammers like The Yes Men can engage the public in unthreatening and entertaining ways.

A more conventional form of consciousness raising can be undertaken using social marketing. Selling ideas, and often behavior change to go with them, is a longstanding tactic to promote sustainability. At the forefront of this activity is Doug McKenzie-Mohr, a Canadian whose community-based social marketing (CBSM) aims to “foster sustainable behavior.” By moving people first to awareness and then to action, and by breaking down the barriers to change, Mohr's techniques can transcend the limitations of conventional social marketing, including well-informed futility (awareness without the ability to act).

Of course consciousness raising can also be undertaken through traditional media and social media to quickly bring issues and solutions to the attention of large audiences. Almost all environmental and Page 156  |  Top of Articlesustainability-oriented organizations use the media to accomplish this. One of the more popular and effective ways to reach people is through short, funny videos that people share on Facebook, YouTube, and other sites. Such “viral” videos may be seen and shared by millions of people within a matter of weeks. One group that employs this strategy is the Story of Stuff Project, which focuses on the unsustainability of the materials economy. Finally, some organizations look to the roots of consciousness raising for their strategies. This is the approach of the Northwest Earth Institute, which uses small group discussions to explore issues, allow participants to learn from each other, and begin to make changes in their own lives (see the sidebar ).

The Northwest Earth Institute and the Story of Stuff Project provide very different models for consciousness raising related to sustainability. One is offline and personal, the other online and viral. One focuses on the environmental and social issues that need to be addressed, the other on things people can do to move society toward sustainability. One sees the solutions as primarily the responsibility of individuals; the other sees them as the responsibility of governments.

The Northwest Earth Institute (NWEI) is an Oregon nonprofit that promotes consciousness raising using classic small group settings that hearken back to the early women's movement. NWEI promotes the sharing of experiences and perspectives in groups of up to a dozen friends, coworkers, classmates, and so on. By emphasizing interpersonal connections and relationships, this approach makes self-reflection and personal change less threatening and more enjoyable. The groups become “communities of change” and thus help people to move from attitude to action. People are able to share ideas and challenges with each other and provide mutual support.

Since the early 1990s, the NWEI has developed nine different discussion courses on topics including sustainable living, voluntary simplicity, connecting with the earth, climate change, food ethics and sustainability, and sense of place, as well as an EcoChallenge to allow people to push themselves to live more sustainably. Over 140,000 people have participated in NWEI programs and more than thirty partner organizations across North America have joined their movement. The NWEI is an example of an organization that provides a platform for people to raise each other's consciousness around sustainable choices and move to act on that awareness in their own lives.

The Story of Stuff Project encourages people not just to share the videos virally on the Internet, but also to host screenings in their communities and follow them with discussions. The project also provides curricula and other resources to move people further down the path to sustainability. What the project has so far excelled at is the first step in raising awareness for sustainability, namely explaining why overconsumption, waste, pollution, health effects, and economic injustice matter.

Like all communication strategies, the effectiveness of consciousness raising depends on the symbols and formats it uses—words, visual images, examples, stories, and so on. The way in which issues and alternatives are presented is of great importance, especially in a crowded communication landscape. Messages need to cut through both the media clutter and time limitations of daily life. Complex ideas must be condensed into symbols to convey messages that are both powerful and easily understood. One example of this is James Balog's before and after photographs of melting glaciers that demonstrate the reality of climate change, especially as seen in the film Chasing Ice. Another is photographer Chris Jordan's collection Midway: Message from the Gyre featuring images of starved albatross chick carcasses filled with the plastic they ate from the Pacific Garbage Patch. Such images can convey a powerful moral message through both traditional and social media.

Probably the most powerful and effective symbol for sustainability consciousness raising is the ecological footprint. Created by William Rees, a professor at the University of British Columbia, and Mathis Page 157  |  Top of ArticleWackernagel, a graduate student in the 1990s, ecological footprint has become a ubiquitous term to describe our environmental impacts. A wide variety of scientifically based measurements of ecological consumption are condensed into the simple concrete metaphor of the footprint. From that have come related concepts such as the carbon footprint. Wackernagel now leads the Global Footprint Network.

Another challenge for engaging people in consciousness raising is integrating it into larger advocacy campaign strategies. Almost all campaigning involves some element of consciousness raising, but by itself, it is inadequate. People do not change their behavior or their level of civic engagement simply because they are aware of an issue or even because they are knowledgeable about it. Among other factors, they need to feel that it is the right thing to do, and they need to see a clear path. To move people from ignorance to awareness to caring to action is a challenge. In particular the attitude–behavior gap—when people's actions do not match what they say—is a significant obstacle. Giving people information on how to be an effective change agent as well as opportunities to participate in actions in combination with consciousness raising is more useful than consciousness raising alone.

Finally, it is important to note that there are no clear lines between consciousness raising, education, persuasion, advocacy, and propaganda. Trying to change people's minds, their lifestyles, or their politics raises ethical questions. The best consciousness raising promotes critical thinking about the kinds of changes being proposed. Within the sustainability conversation, good critical thinking is essential.

Consciousness raising plays an important role in bringing people into the conversation and preparing them to take action. In the long term, consciousness raising takes on a deeper meaning. Many in the environmental and sustainability movement have argued that a significant change in our consciousness must take place in order to culturally support the necessary economic, political, technological, and related structural changes. In other words, our worldviews and values must nurture and sustain the earth rather than exploit it.

Using the label “green consciousness,” the English political scientist John Dryzek cites a number of examples of these new ways of thinking in his 2005 book, The Politics of the Earth. Among them are various forms of ecofeminism, ecospirituality, and deep ecology. The latter is an earth-centered perspective that attempts to articulate a nonanthropocentric approach to the world. In fact, it was the subject of one of the Northwest Earth Institute's early discussion courses. Deep ecology is not 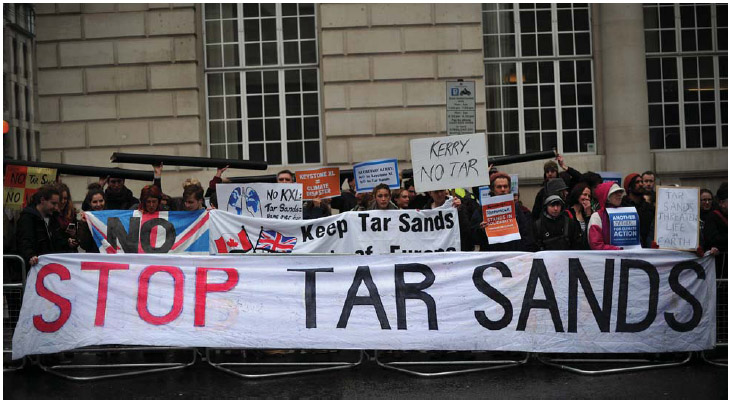 Protesters take part in a rally in central London on April 11, 2013, to demonstrate against the Keystone XL Tar Sands Pipeline as foreign ministers from the G8 group of nations meet nearby. (CARL COURT/AFP/Getty Images.)

without its critics, but it remains true that Western society needs to change its thinking about humanity's place on the earth. Consciousness raising is essential to changing ourselves and changing our institutions in both the short and long terms.

Dale, Stephen. 1996. McLuhan's Children: The Greenpeace Message and the Media. Toronto: Between the Lines.