Nonnative (exotic) species are usually considered species introduced by humans into new habitats where they typically cause harm. Consider kudzu (Pueraria lobata), a vine brought from Japan that was planted to reduce soil erosion. With a growth rate of up to a foot a day, and spreading over 200 square miles (518 sq km) a year, it now blankets millions of acres in the southeastern United States, killing trees and shrubs by heavy shading. Zebra mussels (Dreissena polymorpha), traveling in ship ballast water from Russia, entered the Great Lakes and within a dozen years had spread to most aquatic ecosystems in the eastern United States, clogging water intake pipes and causing annual damage amounting to hundreds of millions of dollars (Pimentel, Zuniga, and Morrison 2005 ). The assumption of many conservationists is that nonnatives are species out of place that should be eradicated to protect native species, ecosystems, and human interests. 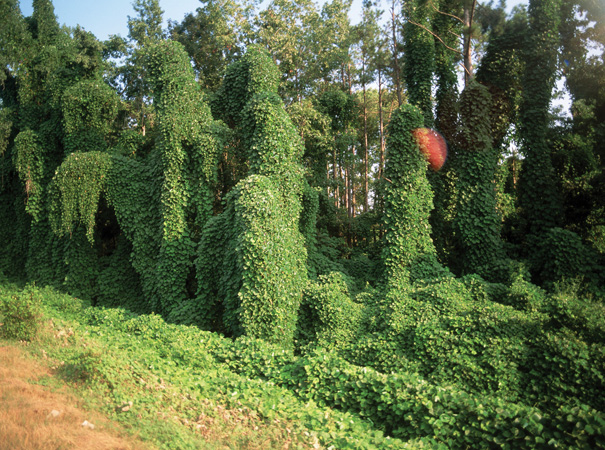 Kudzu growing on trees and shrubs near Oxford, MS. Kudzu was brought to the United States from Japan to reduce soil erosion, but the vine now blankets millions of acres in the Southeast, killing trees and shrubs by heavy shading. BUDDY MAYS/CORBIS.

Since the late twentieth century, a less hostile attitude toward nonnatives has been advanced. From this perspective, the general opposition to nonnatives is scientifically unsupported and practically fruitless (Davis et al. 2011). Nativeness confers no special value on a species (Chew and Hamilton 2011 ). The preference for natives is ethically problematic because it is based on— and reinforces—a common prejudice against things foreign (Peretti 1998 ). Some contend that it is wrong to object to nonnatives because of their origin and that, except in the rare cases in which they are extremely harmful and workable control strategies are available, they should be embraced as “fellow inhabitants of planet earth” (Davis 2013 , 57).

What is a Nonnative Species?

How to characterize nonnative species is problematic. Some argue that any classification “is to some extent arbitrary” (Simberloff 2012 , 10), and others dismiss the concept of nativeness as “uninformative, even deceptive” (Chew and Hamilton 2011 , 44). Three ways of categorizing nonnative species should be distinguished: species that are human introduced, species whose evolutionary origin was in some other location, and species that have not significantly adapted to the local ecological assemblage.

Nonnative species are frequently identified as human-introduced species. While it is likely that the vast majority of the nonnative species of concern have been introduced by humans, species often move into radically different habitats on their own. Vagrant birds frequently travel between North America and Europe (Cassey et al. 2005 ). Ballooning spiders can travel hundreds of miles by putting out a strand of silk, catching the breeze, and hanging on. These species are likely foreign to their new habitats despite not being human introduced.

The human-introduced criterion implausibly implies that a seed arriving in a new habitat stuck to a human boot would produce an exotic plant, whereas that same species would be native if it traveled on the feathers of a bird. This criterion also cannot explain why human introduction of a species as part of a restoration project counts as native restoration, rather than exotic introduction. When humans introduced wolves (Canis lupus) back into Yellowstone National Park in the 1990s, the wolves were natives to that habitat, despite being introduced from Canada by humans.

Nonnatives might be conceived as species that did not originally evolve in a region but arrived later. This fits with how the native/nonnative distinction is applied to humans. To be a native “Charlestonian” one must be born and raised in Charleston, South Carolina; long-time residence is not enough. This categorization once again fails to account for species mobility. Species evolve in one locale then frequently migrate or expand their range to other places and thrive for thousands of years well adapted in their new habitats. In some regions, more than half of the native taxa resulted from historic colonization by invaders (Brown and Sax 2005 ). Volcano-formed islands were originally barren of life, and this evolutionary origin criterion would implausibly entail that virtually all the species on such islands are nonnatives.

Species movement involves nonnative arrival only when the movement is ecological and not simply geographical. The traveling species must find itself in an ecological assemblage to which it has not in fact adapted. Species migrating into new ranges are not exotics if the organisms and abiotic conditions they encounter are sufficiently similar to those in their home range. Bison (Bison bison) expanding their range outside Yellowstone Park onto nearby forestlands are not exotics because the same species are present as in the park. The human-caused presence of wolves in Yellowstone since the 1990s is not exotic arrival because wolves and the species in Yellowstone (although not the particular individuals) were previously adapted to each other. In contrast, if Asian snow leopards (Panthera uncia) were introduced into Yellowstone, they would be exotics—even if they played the same functional roles as wolves—because the leopards and the local species have never adapted with each other.

Species can thus be more or less native, depending on the extent of their adaptation and the degree of difference between their old and new ecological assemblages. Nonnative species can naturalize over time, becoming native as they adapt with the local biota and abiota. The longer a species persists in a new habitat, the more likely that it will have significantly interacted with locals and thus become native. Note that there is no implication that native species are optimally suited for the local habitat or that they have become harmonious ecological fits (Gould 1997 ).

Nonnative species are often assumed to be invasive, outcompeting natives, unbalancing local ecosystems, and threatening biodiversity. Nonnative species are less likely to have the competitors, predators, and parasites that limit their expansion in their home ranges, and native species will not have developed responses to them. Some exotics have caused massive amounts of damage both to human interests (e.g., zebra mussels) and to nature itself. For example, brown tree snakes (Boiga irregularis) that were introduced to Guam caused the extinction of many native bird species (Pimentel, Zuniga, and Morrison 2005 ). There are reports that the economic damage caused by invasions is greater than that caused by natural disasters (Ricciardi, Palmer, and Yan 2011 ).

Moreover, native species can also be invasive: the native mountain pine beetle (Dendroctonus ponderosae) “is currently suspected to be killing more trees than any other insect in North America” (Davis et al. 2011, 153). Some invasion biologists argue that humanity should stop judging species on their origin (their nonnative status) and focus solely on their likely environmental impact (Davis et al. 2011), whereas others demure, pointing to studies indicating nonnatives tend to be more invasive than natives (Paolucci, MacIsaac, and Ricciardi 2013 ).

There are also serious value disagreements about nonnatives. Anthropocentrists will argue that human interests should invariably trump those of nonhumans. If fishermen enjoy catching Asian carp (Hypophthalmichthys nobilis, Mylopharyngodon piceus, Ctenopharyngodon idella, and H. molitrix), then humans should not prevent these fish from entering the Great Lakes solely to protect native fish. Sentientists, who believe all and only conscious animals should count morally, are likely to object to shooting nonnative mountain goats (Oreamnos americanus) to protect endangered plant species. Biocentrists think all living individuals are morally considerable and might object to poisoning nonnative vegetation. Holists who value ecosystems, species, and biodiversity generally will be much more supportive of controlling nonnative individuals.

Responsible thinking about nonnatives must consider other values as well. Given that aesthetics is an important reason to value nature, nonnative species that are beautiful—such as purple loosestrife (Lythrum salicaria)—should be looked on more favorably. Naturalness (i.e., the extent to which something is relatively uninfluenced by humans) is another important value for many conservationists. Although humans have influenced nature since the species’ emergence, in recent centuries that impact has become so dramatic that relatively unhumanized nature has become increasing valuable. When a human-introduced, nonnative species drastically changes natural systems (as with kudzu), nature’s independence has been further compromised and humans have—once again—put their stamp on the natural world. A contrasting point of view is that humans must reconcile themselves to—and take responsibility for—the human-modified world, rather than pine after a long-gone wild nature (Sandler 2012 ; Thompson 2009 ). Nonnatives, whether human introduced or not, can play useful roles in the novel ecosystems emerging as a result of human-induced global change (Davis et al. 2011).

Serious ethical questions about the antipathy toward nonnatives arise because it parallels negative attitudes toward human immigrants. Widespread opposition to nonnative species is believed to reflect and reinforce an irrational fear or dislike of things foreign (O’Brien 2006 ). The military rhetoric used about nonnatives—“invasion biology,” “war on exotic species,” “ the threat from alien invaders”—fits a xenophobic worldview. The analogy between “biological nativists” (or purists) who favor native species over exotics and cultural nativists (or purists) who object to the mixing of races and cultures is instructive and worrisome. Nonetheless, it is unlikely that those who oppose nonnative species believe in the inferiority of these foreign immigrants as is typical with xenophobic cultural purists afraid of “biological pollution” from “lesser” races. Moreover, not all forms of cultural purism are morally problematic. Consider Jewish parents who want their children to marry other Jews in order to perpetuate Jewish culture. Or consider a small community’s attempt to preserve its local economy by opposing the arrival of chain retailers that threaten to drive local businesses extinct. Such desires to foster distinctive local cultures and preserve cultural diversity are praiseworthy. Similarly, biological nativists’ objection to nonnative species can be defended as a way to protect the diversity of the planet’s ecosystems from the homogenizing forces of globalization. Replacing Earth’s diverse biological communities with a planet of weedy, cosmopolitan species would be tragic (Quammen 1998 ). Keeping a dandelion out of Yellowstone is much like keeping Wal-Mart out of a small New England town or McDonald’s out of India. Kudzu in the American South is like commercial television in Nepal, a threat to the diversity of the planet’s communities and ways of life (Hettinger 2001 ).

Some believe that the mixing and blending of flora and fauna from around the world will not lead to homogenization but instead to hybridization and new forms of diversity (Keulartz and van der Weele 2009 ). “Introductions of species can provide the long-term residents with new ecological and evolutionary prospects” much like how “the influx of new minds and perspectives” into a business or academic field can enhance its vitality, diversity, and longevity (Davis 2011, 274). But not all increases in diversity are valuable, and they can be gained at the sacrifice of native biodiversity and integrity. Would bringing back extinct saber-toothed tigers and woolly mammoths to the American continent—as some have suggested (Soulé 1990 )—be desirable diversity enhancement? The global commingling of species might also produce diversity gains that many would find problematic.

Gould, Stephen Jay. 1997. “An Evolutionary Perspective on Strengths, Fallacies, and Confusions in the Concept of Native Plants.” In Nature and Ideology: Natural Garden Design in the Twentieth Century, edited by Joachim Wolschke-Bulmahn, 11–19. Washington, DC: Dumbarton Oaks Research Library and Collection.

O’Brien, William. 2006. “Exotic Invasions, Nativism, and Ecological Restoration: On the Persistence of a Contentions Debate.” Ethics, Place, and Environment 9 (1): 63–77.