With her graduation from medical school in 1849, Elizabeth Blackwell began a nearly 40-year career in medicine, a sojourn that was remarkable not only for the energy and dedication of its practitioner but also because Blackwell was the first licensed woman M.D. in the Western world. Blocked at nearly every point in her early career by male doctors who could not accept a woman in their ranks, Blackwell carved out a niche for herself and other women physicians in what had been an all-male profession.

Blackwell was born in Bristol, England, in 1821 into a family of religious activists and social reformers. Her father, Samuel Blackwell, was a wealthy sugar refiner and Dissenter, that is, a member of one of the several Protestant sects that had arisen in England in the 18th and 19th centuries whose views opposed those of the established Church of England. Blackwell's mother, Hannah Lane Blackwell, was also a supporter of social reform and Dissenter religious belief.

Because Samuel Blackwell strongly believed that women should receive the same education as men, he engaged private tutors to teach all 12 of his children. Elizabeth received an excellent classical education in England until a fire at Samuel Blackwell's refinery compelled the family to move to the United States in 1832. Blackwell, who set up another sugar refinery in New York, was able to continue his children's first-class education in that city. Eventually, not only Elizabeth but her sisters Anna, Ellen, and Emily earned university degrees. Emily would eventually follow in Elizabeth's footsteps by becoming a medical doctor.

When Elizabeth was 17, a financial panic bankrupted her father's New York business, and again the family moved, this time to Cincinnati, Ohio. Samuel Blackwell died soon after the move to Cincinnati, and Elizabeth was forced to work as a teacher in a boarding school founded by her sisters. After several years of teaching in Cincinnati and western Kentucky, Blackwell decided to apply for medical school. According to comments she made in her autobiography, Pioneering Work in Opening the Medical Profession to Women, she “hated everything connected with the body, and could not bear the sight of a medical book.” 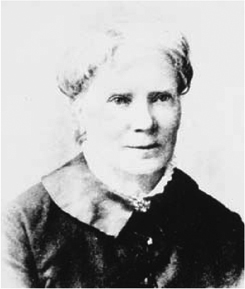 Elizabeth Blackwell became the first licensed female medical doctor in the Western world when she graduated from medical school in 1849. National Library of Medicine, National Institutes of Health

She was rejected by Harvard, Yale, and numerous other colleges before finally being accepted at Geneva College in upstate New York, mainly because the acceptance committee thought her application was a prank. When she arrived in 1847, the teachers were startled but kept to their word, and she was admitted.

Blackwell performed well at Geneva College. In 1848, she served a year's residency at Philadelphia Hospital, an institution serving mainly the poor in Philadelphia. Here, according to Blackwell, “the young resident physicians, unlike their chief, were not friendly. When I walked in, they walked out.” Blackwell persevered and was awarded a degree in 1849. From 1849 to 1851, she went to Europe to further her medical education.

On her return to the United States in 1851, Blackwell began lecturing about medicine and hygiene on the abolitionist and suffragist circuit that had been established by some of the reformers who had been friends of her father's when she was a child living in New York. A group of Quaker women who were active in this circle offered financial aid, and in 1853, Blackwell was able to open a clinic for poor women and children. Blackwell, along with Polish immigrant physician MARIE ZAKRZEWSKA and Blackwell's Page 70  |  Top of Articleyounger sister Emily, staffed the clinic. The cases were those common to the urban poor—typhus, cholera, food poisoning, as well as other common ailments such as broken bones, cancer, and infections. By 1868, Blackwell had managed to add a medical college, the Women's Medical College of the New York Infirmary, to the clinic. It would be a major training hospital for future generations of women physicians.

In 1869, one year after having established Women's Medical College, Blackwell returned to England to live and work. She established a successful practice there but, as she got older, gradually moved into retirement in the Scottish Highlands.

Blackwell not only personally broke the gender barrier in Western medicine but was influential in training successive generations of women physicians to continue the revolution she had charted. By founding the New York Infirmary, she also challenged other doctors to become engaged in bringing medical services to the poor, a struggle she continued almost until her death at the age of 89 in 1910. Hers was a legacy of social activism and personal commitment that has flowered into organizations such as Doctors Without Borders and other engaged medical groups.