With her husband, Carl Cori, Gerty Cori established how the body stores and uses food, a process called metabolism that was not well understood until the Coris began studying it in the late 1920s. For this work, and for her later study of enzymes, proteins that cause physical changes in the body, Gerty Cori, with Carl Cori and an Argentine doctor named Bernardo Houssay, was awarded the 1947 Nobel Prize for medicine.

Gerty Cori was born Gerty Theresa Radnitz in Prague on August 15, 1896. She was the oldest of three daughters of Otto and Martha Radnitz, German-speaking Jews who lived in what was then the Austro-Hungarian Empire, which was ruled by the last of the Hapsburg dynasty from the imperial capital of Vienna. Otto Radnitz was a prosperous chemist who managed a sugar-beet refining business. Otto arranged for Gerty to be tutored at home. When she was 10, she was sent to a girls school for the rest of her secondary education. (Later, after she had become an American citizen, Cori had one child, Carl Thomas, born in 1936.)

Although her father had not intended for her to continue her studies in a university, Gerty Radnitz insisted on studying at a medical school. After studying a year for a difficult entrance examination, Cori passed the exam and entered Carl Ferdinand University in Prague in 1914. Even though World War I began in the summer of her first year, the city was physically untouched by the war and Gerty Radnitz studied here for six years, finally earning her medical degree in 1920. She also met Karl Cori, a medical student from the Adriatic port city of Trieste. The two realized that they shared remarkably similar imaginations and were married in the summer after their graduation.

Gerty Cori's first job after medical school was as a researcher at Vienna's Karolinen Children's Hospital. Karl Cori had taken a job as a teacher at the University of Graz. Both Coris were by now disillusioned about their chances of professional success and personal happiness in war-ravaged Europe. Anti-Semitism was still an obstacle to their careers, one that could have affected Karl because Gerty was from a Jewish family. In 1922, Karl took a job as a pathologist at the New York State Institute for Malignant Page 155  |  Top of ArticleDiseases in Buffalo. Six months later, he persuaded his bosses to hire Gerty as the institute's assistant pathologist.

Even though they were supposed to be working to find parasites that the institute's director believed caused cancer, Gerty and Carl (he changed the spelling of his name after he moved to the United States) instead began devoting most of their time trying to figure out how the body converted carbohydrates into energy for the body. In 1922, Canadian physician Frederick Banting had discovered the hormone insulin, which he began using to treat people with diabetes. Banting and other doctors knew that insulin worked for diabetics, but they did not know why it worked. Gerty Cori, with Carl, decided this was a promising area for research.

By studying the effects of glucose, the sugar converted by the body from carbohydrates, and glycogen, a variant of glucose stored in the body's fat and muscles, in laboratory animals, they described how the body cycles these substances to store and use energy. This discovery, known as the Cori cycle, was announced in 1929. In 1931, Gerty and Carl moved to Washington University in St. Louis. As before, Carl was hired as a professor, while Gerty was given a more lowly job even though she was a full partner with her husband in their research. In St. Louis, they refined the study of glucose and glycogen and identified several previously unknown enzymes that aid the body in burning carbohydrates as fuel. 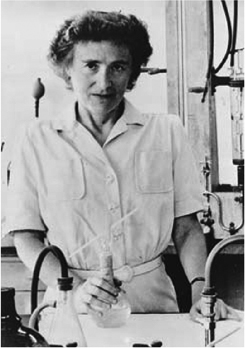 For her work in understanding the biochemistry of the human body, Cori was elected to the National Academy of Science and the National Science Foundation board. In 1947, after she had received the Nobel Prize, she was finally made a full professor at Washington University. That same year, she learned that she had myelofibrosis, a cancer of the bone marrow. She struggled valiantly, continuing her work for the next 10 years before succumbing to the disease in 1957. A good summation of her contribution to science can be found in the words of the Nobel Foundation: She unraveled “the intricate patterns of chemical reactions in the living cells, where everything appears to depend on everything else.”