Sylvia Earle has spent more than 6,000 hours underwater, including living in an undersea “habitat” for two weeks, and has dived deeper than any other solo diver. Admiring colleagues call her “Her Royal Deepness.”

Sylvia was born on August 30, 1935, in Gibbstown, New Jersey, and spent her childhood on a farm near Camden. Her mother, Alice, a former nurse, taught Sylvia and her brother and sister to love nature. “I think I always knew I would work [as a scientist] with plants and animals,” Earle once told an interviewer. Her favorite spot was a pond in her backyard.

In 1948, when Sylvia was 12 years old, her father, Lewis, an electrical engineer, moved the family to Dunedin, Florida. Now the “pond” in Sylvia's backyard was the Gulf of Mexico. She made her first ocean dive when she was 17 and “practically had to be pried out of the water.”

Earle earned a B.S. from Florida State University in 1955 and an M.S. in botany from Duke University in 1956. She married a zoologist, John Taylor, around 1957 (they divorced in 1966) and had two children, Elizabeth and John (Richie). She began full-time undersea research in 1964. Among other things, she collected algae (seaweeds and related plants) in the Gulf of Mexico for her Ph.D. project at Duke, which she finished in 1966. Unlike most marine biologists of the time, she dived to study undersea life in its own habitat rather than dragging it up to the deck of a ship in nets.

In 1970 Earle lived underwater for two weeks as part of a National Aeronautics and Space Administration (NASA)–sponsored project called Tektite; the name is taken from a type of glassy meteoric rock often found on the seafloor. She headed a crew consisting of four other women scientists. Their “habitat,” 50 feet under the Caribbean Sea, consisted of two tanks connected by a passageway. It included not only beds and a kitchen but even hot showers and television. The women spent up to 10 hours a day in the water, studying ocean life.

The group did nothing that all-male Tektite crews had not also done, but they emerged into a blizzard of publicity, hailed as “aquababes.” They also received the Conservation Service Award, the Department of the Interior's highest civilian award. The fuss irritated Earle, who saw it as reverse discrimination, but it also made her realize that as a woman scientist she had a unique opportunity to reach and educate the public. Ironically a greater achievement of Earle's won much less attention. In September 1979 she donned a heavy plastic and metal “Jim suit” (named after a diver who tested an early version of it), a sort of underwater space suit, and dived 1,250 feet into the water near Hawaii. A submarine lowered and then released her. No other diver had gone this deep without being attached to a cable. Current Biography called this “possibly the most daring dive ever made.” Earle remained submerged for two and a half hours under water pressure of 600 pounds per square inch, observing such creatures as “an 18-inch-long shark with glowing green eyes” and “a lantern fish… with lights along its sides, looking like a miniature passenger liner.”

While preparing for the Jim suit dive, Earle met the British engineer, Graham Hawkes, who had designed the suit. The two found that they shared a love of diving and a desire to improve diving technology. They formed two companies, Deep Ocean Technology and Deep Ocean Engineering, in 1981. One of their products was a oneperson submersible called Deep Rover, which Earle piloted down to about 3,000 feet in 1985, the deepest any solo diver had gone. The couple also married in 1986. (This was Earle's third marriage; from 1966 to 1975 she was married to Giles Mead and had a third child, Gale.) Earle and Hawkes have since divorced. In 1992 Earle founded 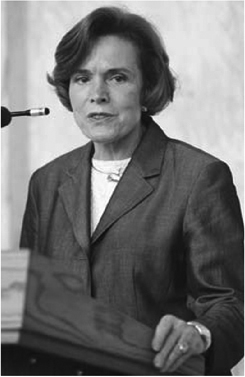 Earle took part in many research projects during the 1970s and 1980s, including diving with humpback whales as part of a study done by Roger Payne and KATHARINE BOYNTON PAYNE. She was also curator of phycology (the study of algae, or seaweeds) at the California Academy of Sciences in San Francisco from 1979 to 1986. Earle has led more than 50 oceanic expeditions and won many awards for her work. They include the John M. Olguin Marine Environment Award (1998), the Kilby Award (1997), the Director's Award of the Natural Resources Council (1992), and the Society of Women Geographers Gold Medal (1990). She is a fellow of the American Association for the Advancement of Science, the Marine Technology Society, the California Academy of Sciences, the World Academy of Arts and Sciences, and the Explorers Club.

Earle served on the President's Advisory Committee on Oceans and Atmosphere from 1980 to 1984. In 1990 President George Bush chose her to be the chief scientist of the National Oceanic and Atmospheric Administration (NOAA). She was the first woman to hold this post. In 1998 Earle's major project was a five-year study of the National Marine Sanctuaries called the Sustainable Sea Expeditions. She has served on the boards of Dresser Industries, Oryx Energy, and various nonprofit organizations, including the World Resources Institute, the Center for Marine Conservation, the Natural Resources Defense Council, the World Wildlife Fund, the Woods Hole Oceanographic Institution, and the Divers Alert Network.