Jane Goodall's research on chimpanzees in Africa is the longest continuous study of animals in the wild and, according to the naturalist Stephen Jay Gould, “one of the Western world's great scientific achievements.” For it she was named a Commander of the British Empire, given the U.S. National Geographic Society's Hubbard Medal, and awarded the Kyoto Prize, Japan's equivalent of the Nobel Prize. She has educated people about chimpanzees, worked to rescue captive chimpanzees and save the habitat of wild ones, and sponsored a program that teaches children to care about animals, the environment, and their home communities.

Jane, the older of Mortimer and Vanne Morris-Good-all 's two daughters, was born in London on April 3, 1934. Her father was an engineer, her mother a housewife and writer. Her favorite toy as a baby was a stuffed chimpanzee named Jubilee, which she still owns.

An incident that happened when Jane was just five years old showed her patience and determination as well as her interest in animals. One day, while on a farm, she vanished for more then five hours. Vanne Goodall called the police, but before a search could be launched, Jane reappeared. She explained that she had been sitting in the henhouse, waiting for a hen to lay an egg. “I had always wondered where on a hen was an opening big enough for an egg to come out,” Goodall recalled later. “I hid in the straw at the back of the stuffy little hen house. And I waited and waited.”

Jane's family moved to the seaside town of Bournemouth at about that time, and she stayed there with her mother and sister after her parents divorced several years later. They had no money for college, so she went to work as a secretary. Then in 1957 a former school friend invited Jane to visit her in Kenya. The invitation revived a childhood dream of going to Africa that Jane had formed after reading books such as Hugh Lofting's fantasies about Dr. Doolittle, who lived in Africa and could talk with animals. Jane began saving her money and left as soon as she could pay the fare.

While in Kenya, Jane Goodall met the famed British anthropologist LOUIS SEYMOUR BAZETT LEAKEY, who had made pioneering discoveries about early humans. Leakey, then the head of Kenya's National Museum of Natural History, liked Goodall and hired her as an assistant secretary. In time he told her about his belief that the best way to learn how human ancestors might have lived was to study the natural behavior of their closest cousins, the great apes—chimpanzees, gorillas, and orangutans—over long periods. He wanted to start with chimpanzees, and he asked Goodall whether she would like to do the research. “Of course I accepted,” she says.

Following Leakey's recommendation, Goodall decided to work at Gombe Stream, a protected area on the shores of Lake Tanganyika in the neighboring country of Tanzania. When British officials informed her that they could not let her live alone in the wilderness, her mother agreed 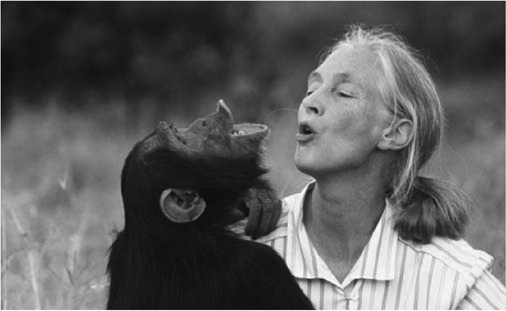 Jane Goodall, who is known around the world for her work with chimpanzees in Africa Photo by Michael Neugebauer; Courtesy, Carnegie Science Center

to stay with her for a few months. The Goodalls and their African assistants set up camp at Gombe in July 1960. Goodall could not get anywhere near the chimpanzees at first, but as the months passed, they grew used to the “peculiar, white-skinned ape.” She, in turn, learned to recognize them as individuals. She gave them names such as Flo and David Graybeard.

In the first year of her research Goodall made several observations that overturned long-held beliefs about chimpanzees. Scientists had thought that the animals ate only plants, insects, and perhaps an occasional rodent, but Goodall saw them eating meat from larger animals. Later she saw groups of them hunt young baboons. Goodallone day watched something even more amazing as David Graybeard lowered a grass stem into the hard-packed open tower of a termite mound. After a few moments he pulled it out with several of the antlike insects clinging to it, then ate them. She later saw other chimps do the same thing. The animals were clearly using the grass blades as tools to get the insects, whereas the common belief was that only humans used tools. Goodall even saw the chimps make tools by selecting twigs and stripping the leaves from them. She observed other kinds of tool use as well. “Chimpanzees are so inventive,” Goodall told the writer Peter Miller.

In 1961 Goodall enrolled in the Ph.D. program in ethology, the study of animal behavior, at Britain's prestigious Cambridge University. She was only the eighth student in the university's long history to be admitted to a Ph.D. program without having first obtained a bachelor's degree. She wrote up her chimpanzee studies as her thesis and obtained her degree in 1965.

In 1962 the National Geographic Society sent a Dutch photographer, Baron Hugo van Lawick, to take pictures of Goodall at work. Van Lawick and Goodall fell in love and married on March 28, 1964. Their wedding cake was topped by a statue of a chimpanzee. In 1967 they had a son, whom they named Hugo after his father, but everyone called the blond youngster Grub, Swahili for “bush baby.” Imitating the behavior of good chimpanzee mothers, Goodall kept the child close to her and showered him with affection. Goodall and van Lawick divorced in 1974. Grub later attended boarding school in England, but he returned to Africa as an adult.

As Goodall's observations continued, she discovered dark sides to chimpanzee behavior. For instance, she saw Page 284  |  Top of Articlethe animals wage war. One group staged repeated sneak attacks on a neighboring group over a period of four years, eventually wiping them out. “When I first started at Gombe, I thought the chimps were nicer than we are,” she said in a 1995 National Geographic article. “But time has revealed that they are not.”

In 1975 Goodall married Derek Bryceson, who was in charge of Kenya's national parks. He was the only white official in the country's cabinet. Unfortunately Bryceson developed cancer in 1980 and died within a few months.

Another tragedy struck Goodall soon after her marriage. Her camp had grown to include students from the United States and Europe, and on May 19, 1975, rebel soldiers from nearby Zaire invaded the camp and seized four of the students. The soldiers demanded ransom for the students' return. After two months of negotiations, money was paid and the students were released unharmed, but the Eden-like peace of Gombe had been permanently shattered. About this time Goodall decided that “I had to use the knowledge the chimps gave me in the fight to save them.” She left the continuing observation of the Gombechimps to her students and began to travel the world as a spokesperson for the animals. In 1977 a nonprofit organization, the Jane Goodall Institute, was formed to help with her work. In 1998 its headquarters were in Silver Spring, Maryland, and from that base she has worked to educate people about chimpanzees, save the chimps' habitat, and limit the use of chimpanzees and other animals in medical research.

In 1984 Goodall received the J. Paul Getty Wildlife Conservation Prize for “helping millions of people understand the importance of wildlife conservation to life on this planet.” Her scientific articles have appeared in National Geographic, and her books include Wild Chimpanzees and In the Shadow of Man. In 1998 she published a book for children, With Love: Ten Heartwarming Stories of Chimpanzees in the Wild.