Though celebrated for his findings in botany and invertebrate zoology, Jean-Baptiste-Pierre-Antoine de Monet, chevalier de Lamarck was generally scorned for his ideas on evolution, for which he is best known. Despite the widespread rejection of his theory, known as Lamarckism, his was one of the first comprehensive theories of evolution and influenced CHARLES ROBERT DARWIN to formulate his theory of evolution based on natural selection—a theory that invalidated Lamarckism. A celebrated naturalist, Lamarckmade important contributions in botany, paleontology, and zoology and was the first to use the word biology.

The youngest of 11 children, Lamarck was born on August 1, 1744, in Bazantin, France. His father, Philippe Jacques de Monet de La Marck, was a military officer, and the family was rather poor despite aristocratic blood. His mother was Marie-Fran çoise de Fontaines de Chuignolles. Lamarck's parents intended that he enter the priesthood, and at the age of 11 Lamarck entered a Jesuit school. When his father died in 1759, however, Lamarck left the school and joined the military, which had interested him considerably more than a religious career. He married three or four times during the course of his life and had a total of eight children, but his personal life was full of tragedy.

Lamarck served several years in an infantry regiment and fought in the Seven Years' War. After the war he was stationed at a number of French forts on the Mediterranean and eastern French borders, where he developed his interest in botany. In 1768 Lamarck resigned from the military service because of ill health. Lamarck studied medicine for Page 424  |  Top of Articlefour years and grew interested in meteorology, chemistry, and shell collecting. He then immersed himself in botany, studying at the Jardin du Roi, the royal botanical gardens, in Paris. 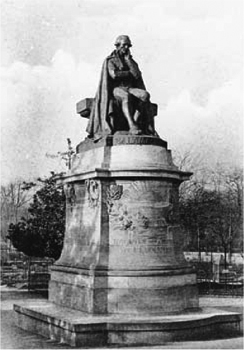 In 1778 Lamarck published Flowers of France, a three-volume work that was extremely well received. In it he introduced a key for plant classification that was far easier to use than other identification methods of the time. Because of this work Lamarck was elected to the Academy of Sciences. Lamarck continued to study botany until the revolution of 1789, when the Jardin du Roi was reorganized. It became the Jardin des Plantes (National Museum of Natural History) in 1793, with Lamarck in charge of animals without backbones, which he later named invertebrates. Lamarck not only introduced the concept of museum collection, in which objects were arranged in a systematic order, but also in 1800 revised the classification of invertebrates. He systematically analyzed the functions and complexities of essential organs, thereby discerning the differences between invertebrates with outward similarities. Lamarck described his findings in his breakthrough work Natural History of Invertebrate Animals, published between 1815 and 1822.

Lamarck's evolutionary theory was first introduced in Zoological Philosophy, published in 1809. He proposed that there was a natural tendency to increasing complexity. Lamarck held that organs were strengthened or weakened through use and disuse and that acquired characteristics are inherited. His most famous example concerned the giraffe; Lamarck stated that the giraffe's neck had grown longer because of the need to stretch for high leaves, and that this change was passed on to offspring.

Though Lamarck was well respected for his achievements in botany and zoology, by the early 1800s he had severed many ties with the scientific community; science was becoming more detail-driven, and Lamarck was concerned that it would no longer be a logical system enhancing general understanding of the world. He began to suffer from poor health in 1809, and by 1818 he was completely blind. Only one of his eight children was financially successful, so when Lamarck died in 1829, his family had to solicit funds to pay for the funeral.