Although Antoni van Leeuwenhoek had no formal scientific education, he contributed immensely to scientific understanding through his empirical observations at the microscopic level. Isolated from the scientific community by his lack of training and his understanding only of his native language, Leeuwenhoek relied on his own faculties, such as his keen eyesight, his excellent hand-to-eye coordination, and his innate mathematical abilities, to guide his scientific experimentation.

Leeuwenhoek was born on October 24, 1632, in Delft, Holland. His parents were Margriet Jacobsdochter van den Berch and Philips Thoniszoon, a basket maker. On July 29, 1654, Leeuwenhoek married Barbara de Mey, daughter of Elias de Mey, a British serge merchant. Together the couple had five children, but only their daughter Maria survived her father. Leeuwenhoek spent his early life as a draper and haberdasher; incidentally, he ground and polished his own magnification lenses to inspect cloth quality. He also served as the chamberlain to the sheriffs of Delft, as an alderman, and as a wine gauger (or inspector of weights and measures). Leeuwenhoek's first wife died in 1666, and on January 25, 1671, he married Cornelia Swalmius, daughter of a Calvinist minister.

That year Leeuwenhoek's scientific pursuits commenced in earnest, as his financial situation was secure and his second wife's social position put him into contact with the Dutch intelligentsia. In his microscopic observations he focused his attention on the mechanisms of sexual reproduction and the nourishing systems in plants and animals. In 1674 he became the first person to observe blood corpuscles; that same year he discovered what he called animalcules, otherwise known as protozoa. Two years later in a letter dated October 9, 1676, he reported to the Royal Society of London this discovery of microorganisms with life force, a revelation that startled the fellows of the society. That same year he observed bacteria in tooth scrapings, and in 1677 he observed spermatozoa.

Though Leeuwenhoek was more given to observation than to interpretation, he hypothesized that spermatozoa penetrate the egg in mammals and thus introduce the life force to sexual reproduction. This theory became known as animalculism, against which the ovists argued, as they believed that the egg contributed the life force. This controversy remained unsolved for the next two centuries, until the fusion of sperm and egg was demonstrated in 1875. In 1680 the Royal Society elected Leeuwenhoek as a fellow, and he continued with his microscopic observations: In 1682 he recognized striations in skeletal muscle; in 1683 he described blood capillaries; and in 1684 he observed red blood cells. By that year Leeuwenhoek had written 110 letters reporting his findings to the Royal Society, which he gathered together for publication. 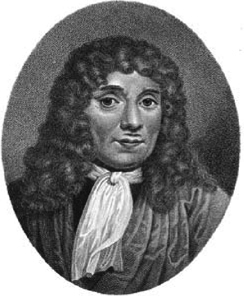 Throughout his lifetime Leeuwenhoek ground 419 lenses, which magnified samples 30 times at the weakest and 266 times at the strongest magnification. In 1716 he received a silver medal from the Louvain College of Professors, and throughout his late life he received eminent visitors, including Czar Peter the Great and Frederick the Great of Prussia, a testament to his significance as a prominent scientist of his time. Leeuwenhoek died on August 26, 1723, in Delft.