Drawing on research begun in her bedroom during World War II, Rita Levi-Montalcini discovered a substance that makes nerves grow. It plays a vital part in the development of humans and animals and in the future may be used in medical treatment. For its discovery Levi-Montalcini and her coworker, STANLEY H. COHEN, shared the Nobel Prize in physiology or medicine in 1986.

Rita Levi-Montalcini was born in Turin, Italy, on April 22, 1909. She had a twin sister, Paola, and an older brother and sister. Her father, Adamo Levi, was an engineer and factory owner. Rita admired him but feared his temper and felt closer to her mother, Adele, whose maiden name was Montalcini. Rita later combined her father's and mother's last names in her own.

Rita felt she was “drifting along in the dark,” with no idea of what to do with her life, until she was 20, when a family friend's painful death of cancer made her decide to become a physician. Having received only the minimal education allotted to girls, she had to be tutored before she could qualify for medical school. She entered the Turin School of Medicine in 1930 and earned her M.D. with honors in 1936. While still a student she became an assistant to one of her professors, Giuseppe Levi (no relation), and she continued in that capacity after graduation. From him she learned how to study spiderlike nerve cells in the nervous systems of embryo chickens.

The Fascist leader Benito Mussolini had taken control of Italy in 1925. His regime did not persecute Jews as intensely as that of Nazi Germany, but in 1938 it passed a law that deprived all Jews of academic jobs. Both Levi and Levi-Montalcini thus became unemployed. Levi-Mon-talcini was discouraged until a friend from medical school reminded her of all the good scientific work that had been done with limited laboratory equipment. “One doesn't Page 448  |  Top of Articlelose heart in the face of the first difficulties,” he told her. He suggested that she try to continue her chick embryo research at home. 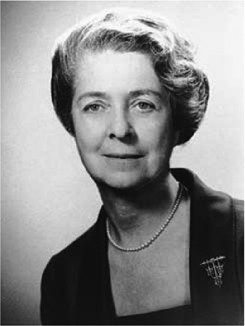 Rita Levi-Montalcini, who discovered nerve growth factor (NGF), a substance that makes nerves grow and may someday be used in treatment of such conditions as Alzheimer's disease Bernard Becker Medical Library, Washington University School of Medicine

The attempt seemed “a voyage of adventure” to Levi-Montalcini, so she set up what she called a “private laboratory a la Robinson Crusoe” in her bedroom. She made a small heater into an incubator for her eggs and sharpened sewing needles to use as scalpels for cutting up the tiny embryos. She continued even after World War II began and her family had to move to a small house in the hills to escape the Allied bombing of Turin. There her laboratory shrank to a corner of the living room, and the eggs she experimented on later became part of the family's meals.

In her makeshift laboratory Levi-Montalcini set out to duplicate the experiments of a researcher named Vik-tor Hamburger, who had shown that when a limb was cut off a developing embryo, the nerves starting to grow into that limb died. He thought this happened because the cells were no longer receiving some substance from the limb that they needed in order to mature. Levi-Montalcini, however, found that the cells did mature before they died. She suspected that the unknown substance kept the cells alive and attracted them to the limb rather than helping them mature. She published the results of her research in a Belgian science journal.

Mussolini fell from power in July 1943, to the relief of many Italians, but German troops took control of the country a month and a half later. Now for the first time Jewish families in Italy were in real danger. Using assumed names, Rita and most of her family hid for a year with a friend of Paola's in Florence. They returned to Turin after the Allies freed Italy in the spring of 1945.

In 1946 Levi-Montalcini received a surprise letter from Viktor Hamburger, who had read the report of her findings about his research. He was now a professor at Washington University in St. Louis, and he invited her to go to the United States and work with him for a semester. She agreed, little knowing that the “one-semester” visit that began in 1947 would last 30 years.

Levi-Montalcini's work took a new direction in 1950, when Hamburger told her about research done by a former student, Elmer Bücker. Bücker had grafted tissue from a mouse cancer onto a chick embryo and found that the tumor made nerve fibers from the embryo multiply and grow toward it, just as a grafted limb would have. Levi-Montalcini could not see why cancer tissue should have this effect, so she set out to repeat Bücker's experiments. She found that some mouse cancers produced an amount of nerve growth “so extraordinary that I thought I might be hallucinating” when she viewed it under the microscope. Nerves grew not only into the tumor but into nearby organs of the embryo. Levi-Montalcini noted that the nerve cells did not make contact with other cells, however, as they would have if stimulated by an extra limb.

Levi-Montalcini decided that she would have a better chance of identifying this “nerve-growth promoting agent” if she studied its effects on nerve tissue in laboratory dishes rather than on whole embryos, which contained many substances that affected growth and development. She therefore spent several months in Rio de Janeiro, Brazil, learning the techniques of tissue culture from a former student of Giuseppe Levi's. At first she had trouble making her experiments work, but she finally found one tumor that made nerves grow out from a chick embryo ganglion, or nerve bundle, “like rays from the sun.”

In January 1953 a new coworker, the biochemist Stanley H. Cohen, joined Hamburger's group. He set out to learn the chemical nature of Levi-Montalcini's mystery substance, which those in the lab were beginning to call nerve growth factor (NGF). His skill in chemistry perfectly complemented Levi-Montalcini's in working with embryos and tissues. “You and I [separately] are good,” Cohen once told her, “but together we are wonderful.” Page 449  |  Top of ArticleLevi-Montalcini, for her part, later called the six years she worked with Cohen “the most intense and productive years of my life.” Among other things, they learned that NGF was a protein, one of a large family of chemicals that carry out most activities in living cells.

Levi-Montalcini had been made a full professor at Washington University in 1958, but Hamburger was unable to gain a similar appointment for Cohen. Deciding that he needed more security, Cohen reluctantly gave up his research with Levi-Montalcini and moved to Vanderbilt University in Tennessee in 1959. Levi-Montalci-ni heard the news of his departure “like the tolling of a funeral bell.”

Levi-Montalcini had become a United States citizen in 1956, but she also maintained Italian citizenship and stayed in close touch with her family. In 1959 she decided that she wanted to spend more time with them, so she arranged with Washington University to establish a research outpost in Rome. This research unit was greatly enlarged in 1969 and became part of the new Laboratory of Cell Biology, run by Italy's National Council of Research. Levi-Montalcini directed the cell biology laboratory for the next 10 years, and in 1977 she moved back to Italy for good. She shared an apartment in Rome with Paola, an artist, whom she called “part of myself.”

Levi-Montalcini received many awards for her work on NGF, including the prestigious Lasker Award for medical research in 1986. The Lasker is often considered a prelude to a Nobel Prize, and so it proved to be for her. In October 1986 she learned that she was to share that year's prize in physiology or medicine with Cohen. In 2001 she was nominated as senator-for-life by Italian president Carlo Azeglio Ciampi.

Levi-Montalcini officially retired in 1979 but continued to do research. In 1986 she found that NGF can spur the growth of brain cells as well as those of the spinal cord; that finding suggests that it might someday be used in a treatment for brain-damaging conditions such as Alzheimer's disease and strokes. She has also found that some cells in the immune system both produce and respond to NGF, suggesting a link between this disease-fighting system and the nervous system.